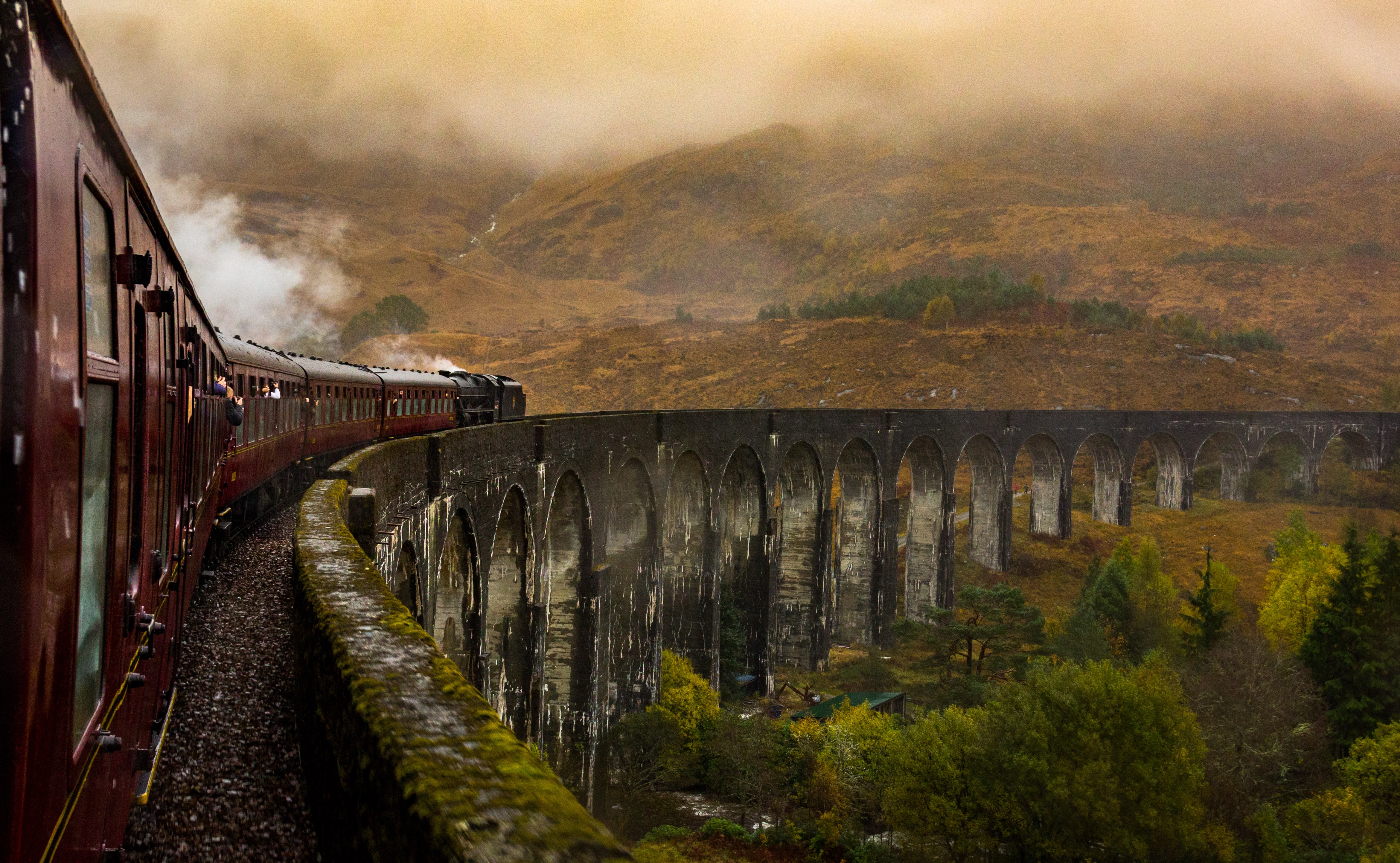 On board the real-life Hogwarts Express

Hurry, the train is leaving! As you run, a little lost, through the London station of King’s Cross while pushing your bags on a trolley, your parents won’t stop nagging. Quick! Quick! A few metres away, you make out Platform 9 ¾, which the Muggles around you can’t see. You run into the stone wall and slip through without the slightest issue. On the other side, you find a splendid red and black steam train spitting fumes of white smoke. You jump on board, the whistle blows and the train gets going. Yep, you’ve made it on board the Hogwarts Express and you’re not going to miss your chance to enrol at the world’s biggest magic school.

If you’re familiar with this scene, that’ll be because you’ve seen or read some of the Harry Potter tales. If you’re not, then you must feel a little lost, and we’re sorry about that. Here’s a little more info, just to help you catch up. In the fantastical world conjured up by J.K. Rowling, young witches and wizards study in a sorcery school, which is accessed by a magical train. Immortalised in hit Hollywood films which were based on the books, this mythical train isn’t entirely the product of the author’s imagination. Like many other aspects of her works, Rowling was in fact inspired by real rail services in the United Kingdom.

The first is known as The Jacobite Steam Train. Operated by West Coast Railways, this storied steam train is up and running from April to October, connecting the town of Fort William and with the port of Mallaig. It’s a spectacular 84-mile (or 135-kilometre) journey through the Scottish Highlands. Passengers are able to gaze up at Ben Nevis, the highest peak in the UK; Loch Morar, which served as the actual Hogwarts Lake in the films; the famous Glenfinnan viaduct; and Loch Nevis, one of Europe’s deepest lakes. In other words, it’s as close as you’ll ever get to entering the magical world of Hogwarts. And on your way there, you’ll also get to take in an array of picturesque villages like Lochailort, Arisaig and Morar.

While the Jacobite Steam Train is the train that probably most closely resembles the Hogwarts Express of the films, legend has it that another Muggle train inspired J.K. Rowling: the Flying Scotsman. This train usually links Edinburgh, the Scottish capital, with London’s King’s Cross station. Revived in 2016 after a gap of ten years, this spectacular 97-tonne locomotive pulls a series of carriages that feel completely stuck in time. There’s no wi-fi on board, and no plugs. The only thing you can do is kick back and enjoy this magical old-fashioned railway experience.

Inside the carriages, the decoration and ambiance feel veritably Edwardian. Over the course of this admittedly quite slow journey, you’re able to lounge on comfortable armchairs in wood-panelled salons. You could also order an aperitif at the train bar, where musicians play for passengers. And at dinner, you could pull up a chair and the haute-cuisine restaurant where the vibe is very much smart dress and white tablecloths. There’s even an on-board spa and an ‘observation carriage’ specially made for passengers looking to admire the Highland views.

If you’re exploring the UK by rail, you’ll likely discover many other trains, railway lines and other locations that give the impression of having provided inspiration for the Harry Potter books. But that’s inevitable, really. As many authors before J.K. Rowling have shown, writers can conjure up a whole railway universe of their own. Consider Agatha Christie, who saw in trains the ideal setting for her crime novels; Emile Zola, who turned the railways into a social metaphor; and Blaise Cendrars, who saw something intensely poetic in the train journey. So perhaps you may spy something magical in trains that few others do. A detail, an object, a landscape or a person might recall a line from that most British of book series. This is one of the greatest similarities between trains and books: they both provide fuel for the imagination. So no wonder writers and filmmakers like the railways so much.

It’s 3.30pm on June 9 1865 in the county of Kent. A train travels from Folkestone to London. On board was the writer Charles Dickens,