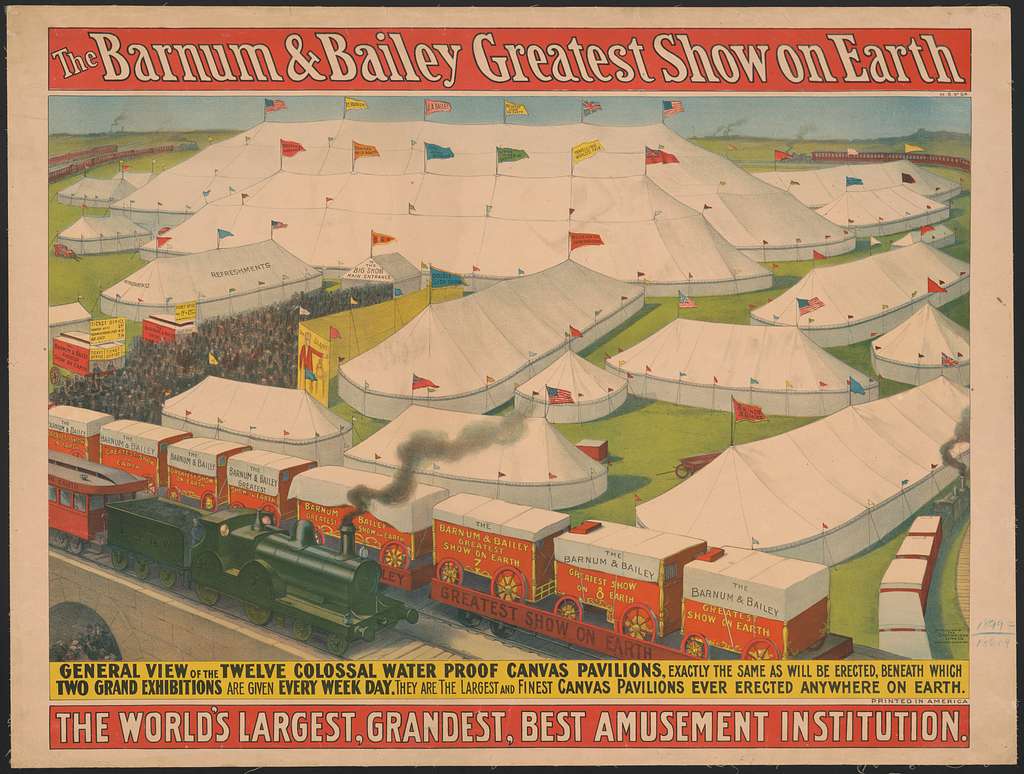 Elephants on the rails

Good evening, ladies and gentlemen, and welcome on board the RBBX, the Ringling Brothers and Barnum & Bailey Circus. Today we’ll be telling you all about this gigantic circus that travelled all over the USA for 140 years by rail. Better known as the Barnum circus and referred to as ‘The Greatest Show on Earth’ by its founder, it was finally closed down in 2017 for financial reasons linked with the wellbeing of the animals on board. So come on, climb aboard and discover the history of this unlikely spectacle.

First, a little scene-setting. The sun has just risen above the small American city where you live. At his desk, a steaming coffee in hand, the sheriff looks out over a community that is just waking up. Workers are leaving for a day at the factory, children are eating their cornflakes and getting ready to go to school. Shopkeepers are dusting off the products in their windows. And suddenly, a loud noise rings out. That’s the whistle of a gigantic train pulling into the station. On board is the world’s most famous circus, which is about to dazzle the town.

But the RBBX isn’t just any old train. Around a mile (or 1.6km long), it is made up of 60 carriages carrying artists, technicians, circus equipment and, of course, the famous animals of the Ringling Brothers and Barnum & Bailey Circus. Launched in 1871 by Phineas Taylor ‘P. T.’ Barnum, after whom it was named, the mythical circus became famous thanks to the involvement of several exotic animals, including elephants. The most famous, known as Jumbo, is known to many throughout the world (this was the animal that inspired Dumbo, after all). And it was because of the elephant that the word is now used to designate something particularly massive.

Over the years, the circus carried lions, tigers, horses, llamas and several other animals from all corners of the globe. They travelled in carriages specially kitted out for their particular dimensions, often located right after the locomotive to reduce the impact of their movements on board. Some were even able to carry 12 or 13 adult elephants. And so while they may have been the stars of the Greatest Show on Earth, the living conditions of these animals weren’t ideal at all. Far from it.

After the animal carriages came those with the heavy machinery, then those carrying humans. The latter weren’t exactly equal either. The show’s big stars had private cabins taking up a third or even half of a carriage. By contrast, other staff were piled up in narrow bunks, with some even having to share. Because of the heat and lack of comfort, some people even opted to create their beds in the equipment carriages.

Although the circus was a huge success all over the country, it finally shut down in 2017. Financial reasons were to blame. ‘This circus has survived two world wars. It’s existed in so many different eras and changed several times,’ said Kenneth Feld, the CEO of Feld Entertainment and the last owner of the circus, which he bought in 1967 for $8 million. He added: ‘Since we wrapped up the show with elephants last year, ticket sales have continued to fall.’ This announcement obviously upset the circus’s many die-hard fans, but was welcomed by animal-rights groups, which had fought for a long time for the elephant performances to stop.

After 140 years, the iconic train stopped criss-crossing the country. Just as the railways have evolved over the decades, so too have our values. Clowns, trapeze artists, magicians and all the other circus performers would have to continue to wow audiences without putting animals in cages and transporting them in grim conditions. And if you really do want to see lions and elephants nowadays, there’s nothing stopping you from travelling around Africa or India by train to see them in their natural habitats.