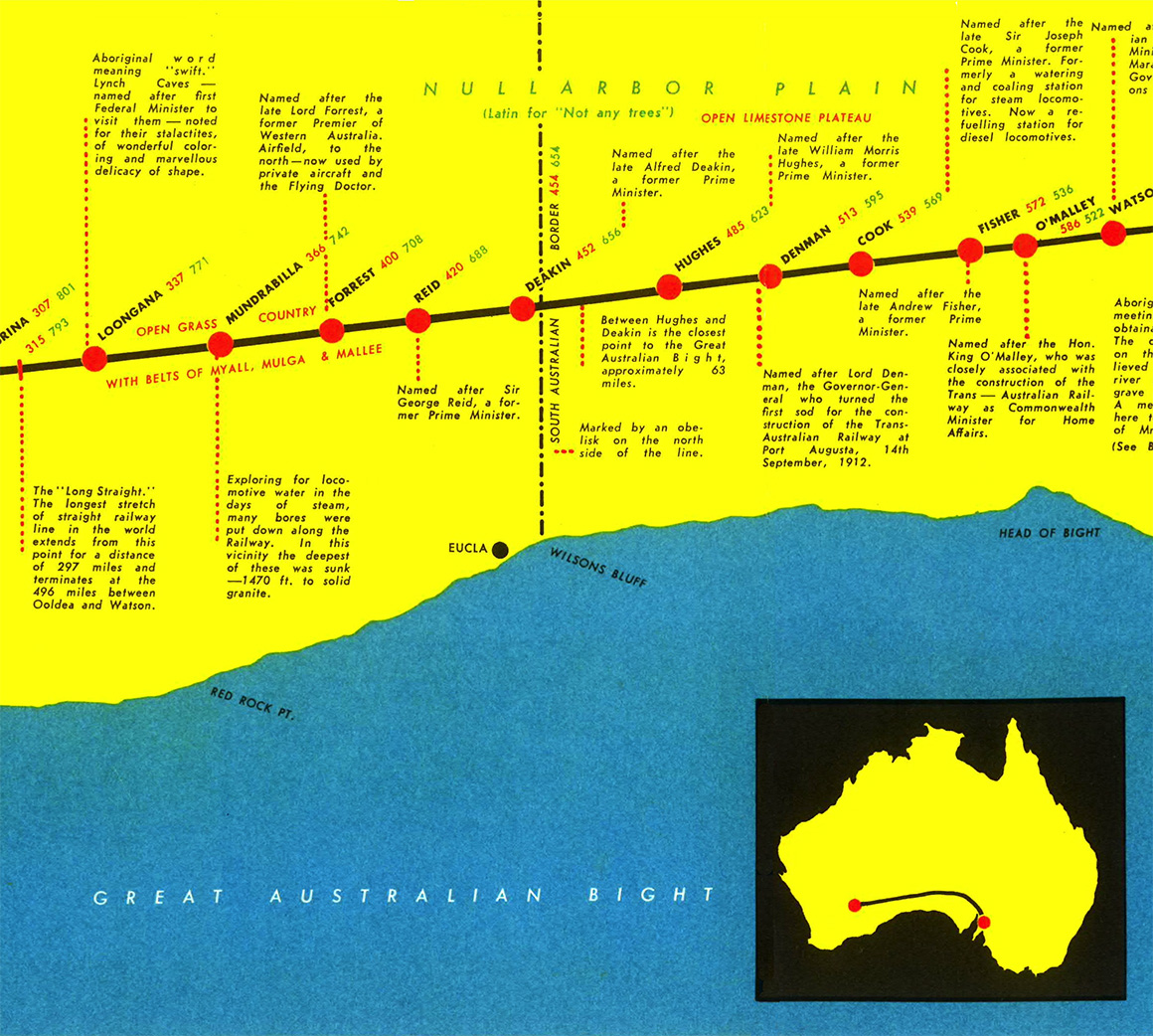 On board the world’s longest (straight) train line

Humans have gone to great lengths to allow trains to travel through often hostile landscapes – sometimes with questionable effects on the environment. That’s the case in China, where a railway line now runs through the gigantic Himalayan mountains, and there are even services that run beyond the Arctic Circle. Thanks to engineers like Gustave Eiffel, bridges and viaducts have been built across vast valleys and tumultuous rivers. In some cases, they’ve even changed the composition of the soilto allow high-speed services to get by. But what with all these obstacles, railway workers have rarely had the opportunity to lay tracks in a straight line. Except in Australia, that is, where you’ll find what is considered to be the longest straight train line in the world. It’s this 478-kilometre stretch of railway we’ll be telling you about today. Clearly, for such a route to be possible, you’d expect a rather extraordinary setting: the plain of Nullarbor.

Let’s set the scene a bit. You’re in the south-east of Australia, on a limestone plateau that’s so flat you can see for kilometres around. Surrounding you, there’s nothing, except 200,000 square kilometres of vegetation known as the Steppes. There is very little vegetation, though you can see a few thickets in the distance. Low levels of rain and the searing heat mean the area is not ideal for any sort of plantations. If you’re not a fan of wide-open space, it’s possible that you’d find the place rather hostile. This was no doubt the case for Edward John Eyre, the first European to travel across these plains, describing them as a hideous anomaly. As far as we’re concerned, the area boasts all the mysterious splendour you’d expect of a desert. But we’ll let you make up your own mind, if ever you make it out to take the train that passes through these parts.

Built between 1912 and 1917, this railway was initially intended to link Port Augusta, in southern Australia, with Kalgoorlie, in western Australia – a 1,693-kilometre journey. As well as shortening the time between these two parts of the country and facilitating the transport of goods, the Trans-Australian Railway also had political importance. It would allow for the unification of the new colonies, creating a sense of oneness for the inhabitants of the enormous Australian landmass. Just like when the Americans and Canadians built railway lines connecting the eastern and western swathes of their territories, a team had started on each side of the country, with the aim of eventually meeting in the middle.

But laying down hundreds of kilometres of railway track in a straight line on flat terrain was by no means an easy task. Sure, the workers didn’t have to dig through the Rocky Mountains, but there were other problems on the Nullarbor plain: the railway tracks risked sinking into the sand. So while the train drivers may have wished to make the most of the straight route to push ahead at high speed, they in fact had to pass through certain areas at a reduced speed to limit the risks. The situation was improved somewhat in 1969 when the line was modernised and extended from Port Augusta to Sydney and from Kalgoorlie to Perth. This is when the Trans-Australian Railway became the Indian-Pacific Railway.

This rail line still exists today and allows travellers to explore the Australian desert safely and comfortably. The luckiest – and most eagle-eyed – may be able to spot kangaroos, wombats or emus along the way. You may even spot one of the troupes of dromedary camels that have proliferated in Australia since they were introduced by the Europeans in the nineteenth century. But if you hop out of the train at any point, and take a step or two away from the train tracks, you’ll find that the most notable treasures in these parts aren’t actually living. As well as being renowned among archaeologists for the incredible fossils that can be found in its caves, the Nullarbor plain is also the place where fallen meteorites are the best conserved, thanks to the unique climate.

The trains of the Indian-Pacific line aren’t the only way to travel through the area. On the immense motorway that cuts through this part of the country – also one of the longest straight roads in the world – you’ll also find so-called ‘Road Trains’. These are essentially enormous lorries that are between 20 and 30 metres long. Some are even 40 to 50 metres long. But though they may look pretty flashy, they are renowned for being rather dangerous and are also heavy polluters. On the rails, by contrast, you can rest easy. For a railway line, however straight, really is the best way to travel through hostile lands.

On board the Bestia, the Mexican death train

Day is dawning in the small town of Arriaga, in the state of Chiapas. Suddenly, the train sets off. In an instant, men, women and children emerge from the shadows and grasp onto the sides of the train.

How the Underground Railroad took slaves to safety

Not all that well known in Europe, this was a network of clandestine routes and safe houses that allowed American slaves to flee the southern states.