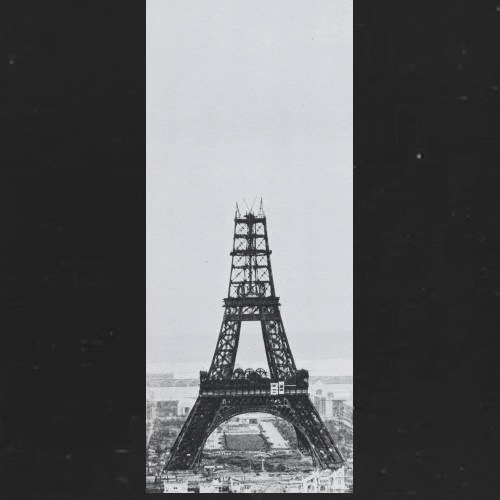 The Eiffel Tower and the railways

The origins of the Iron Lady

18,038 pieces of metal, 2,500,000 nails, 10,100 tonnes and 330 metres in height: the composition and dimensions of the Eiffel Tower really do justify its incredible popularity throughout the world. Erected in 1889 for the Exposition Universelle in Paris  thanks to the genius of the engineer who gave it his name, the Iron Lady was only supposed to be up for 20 years. But one thing few people are aware of is that its technological complexity is closely linked with the railway industry and its development in the nineteenth century.

To understand how the tower is connected with trains, you need a bit of historical context. It’s the end of the nineteenth century, the Industrial Révolution is well under way in France, and iron is the manufacturing material du jour. Metal was gradually replacing masonry in structures like viaducts. Before the arrival of Gustave Eiffel, however, engineers were struggling to transition to this kind of material in columns and pillars. These would remain as brickwork and stone, while a metallic structure was laid on top. It was a nifty method, but limited, as it didn’t really allow engineers to traverse larger estuaries and made the navigation of boats passing underneath rather difficult.

This is where Gustave Eiffel came into his own. To face up to this challenge, he proposed combining straight metallic beams, already used for other kinds of structure, with an immense metal arch replacing the pillars. This innovative technique was greeted with much fanfare in 1875 when he was selected to design the bridge over the Douro river in Portugal. This structure would soar 61 metres above the water thanks to its enormous metal arch.

In 1880, Eiffel was part of engineer Léon Boyer’s team, which involved him playing a key role in designing the Garabit viaduct in the Cantal department. This 565-metre-long structure was, at 122 metres high, the highest bridge of its kind in the world. The metal arch was slowly coming to define the architecture of the railways. But that didn’t stop Eiffel from still building bridges with masonry, like the Tardes viaduct in 1885.

A year later, however, Eiffel left bridges behind to focus on a competition launched on May 1 1886 by the minister of commerce, Édouard Lockroy, to build a metal tower on the Champs de Mars. He won, and was joined by engineers Maurice Koechlin and Emile Nouguier and architect Stephen Sauvestre. After much discussion (and several different plans), they settled on a simple design. On July 1 1887 the work began.

Overall, between 150 and 300 workers, almost all of whom had previously worked on viaducts, were enrolled on this epic and ambitious project. Each piece was designed and made in the Eiffel business HQ in Levallois-Perret. They were then combined into five-metre-high elements which were brought to the site itself. Here certain temporary nails were replaced by others, inserted hot and which helped glue the structure together as they cooled. In total, it took four men working by hand to put a single one in place.

Even more astonishingly, certain workers had to work beneath the level of the Seine to put in place the structure’s concrete foundations. To do this, they used watertight metal boxes in which were pumped full of compressed air. While each of the four pylons had its own block, they were all linked together by walls. To climb up the slowly emerging structure, the workers used wooden scaffolding and steam-powered cranes. Two years, two months and five days after the first hammer blow, the Eiffel Tower was complete. This pretty structure, built on vast metallic arches, meant France could celebrate its Exposition Universelle with real pride.

It should be noted that the tower’s links with the railways aren’t just technical. In fact, a train line was created to make it easier to get to it. Much used during the Exposition Universelle, it declined in popularity over the following decades until it was forgotten by the majority of Parisians. It was only with the arrival of the RER C (into which it was integrated) in the 1980s that it gained a new lease of life. Nothing was lost, it merely transformed, like much of the French capital. Except the Eiffel Tower, that eternal and imperturbable Parisian icon.