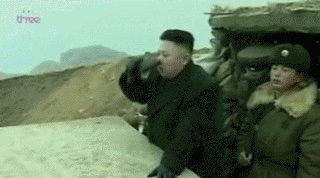 Why did Russia send a train of race horses to North Korea?

With his immaculate white shirt, tiny glasses and inimitable haircut, recognisable the world over, the North Korean leader Kim Jong-un gallops at high speed on a white horse along a pretty tree-lined passage. Changement of scenery. This time, the third dictator of the Kim dynasty isn’t alone. He’s followed by four cavaliers in equally dazzling costumes. He wears a fetching beige hat, leading the way along a forest path. In the background, you can make out patriotic-sounding music. The scenery changes again. The dictator isn’t galloping any longer. He’s got his back to the camera and look out over a beach. He stares into the distance, perhaps imagining a world where North Korea isn’t one of the poorest countries on Earth.

These surreal images, which no doubt bring to mind the photo of a topless Vladimir Putin riding a horse, feature in a bizarre North Korean propaganda film called ‘The Great Year Of Victory, 2021’. It is perhaps most notable for showing just how passionate Kim Jong-un is about horses. In fact, when railway services restarted between Russia and North Korea in early November 2022, the first train that travelled from one country to another was in fact a convoy filled with… 30 horses: five stallions and 25 mares. Transported from the city of Suzdal, near Moscou, thanks to three enormous lorries especially equipped for the occasion, they then crossed the Korea-Russia Friendship Bridge. This 800-metre-long bridge links the cities of Khasan and Tumangang across the River Tumen.

These noble creatures are Orlov horses. This breed has broad shoulders, a rather imperious gait and a small head that recalls the pure-blood Arab beasts that are the pride of Russia. They were initially bred by a Russian count who wanted a beast that could rival the mightiest European race horses. At least 15 breeds of horses were thus imported from all corners of the world to create this breed of horse whose endurance and range are considered exceptional. This wasn’t the first time Kim Jong-un had had Russian horses delivered. Between 2010 and 2019, North Korea ordered no fewer than 138 horses from Russia, costing a total of $584,302.

Filling a train with horses for the pleasure of a politician would seem frivolous in any country, but especially in a poor one like North Korea. Heavily dependent on international aid and trade with its (very few) allies, the country also relies heavily on its railway links to make sure its population has a constant supply of food – though not with huge success: the country is said to be facing a shortfall of 800,000 tonnes of rice. And more generally, its economy is in a state too. According to figures from the South Korean central bank, its GDP fell in 2021 to 31,409 billion won in 2021, or 23.56 billion euros, which is equivalent to levels last seen in 2003. It’s also just 1.4 percent of the South’s GDP. So it goes without saying that the people of North Korea could have done with a train filled with more basic goods than Orlov horses. What’s more, according to the Russian press agency Interfax, a second train filled with medication was supposed to make the same journey, though no date had been made public.

However, this train of horses can’t just be explained away as one of Kim Jong-un’s whims. In fact, it is emblematic of a long-established and close relationship between Putin and Kim. Having been one of the five countries that voted against the UN resolution condemning the Russian invasion of Ukraine, North Korea has been rewarded by being allowed to import flour from the country August and gas in September 2022. And it’s working both ways: according to the think tank 38 North, another train left North Korea for its huge northern neighbour. Certain US analysts reckon this convoy may have contained ammunition that Pyongyang had sold to Moscow.

So the railways hold lots of dark secrets in this part of the world. Like most transport networks, they can be used as a geopolitical tool that helps bind Russia, China and North Korea together as allies. Even from this perspective, the trains very much seem like the future. Why? Because in a world where petrol will no doubt one day vanish, they can keep going, transporting houses and soldiers, medication and ammunition. Like all means of transport, the train is only what you make of it. But unlike its fossil fuel-powered counterparts, it will remain in service for a long time after the oil economy collapses.

There are a handful of stories from the time still well worth sharing. One pretty much guaranteed to make you smile is the one known as the tale of the Tsar’s finger.