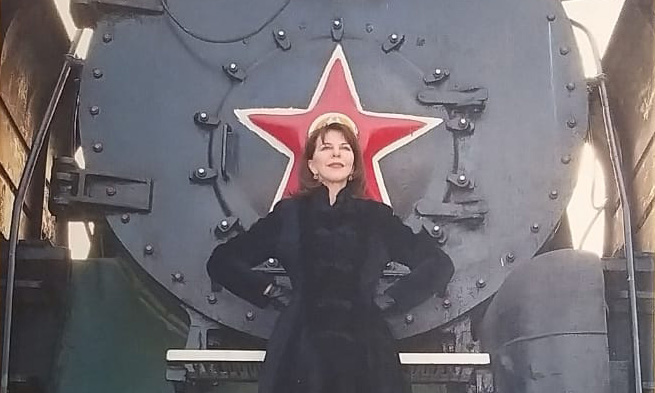 When an actress revived a mythical railway service

It was on board the precursor of the Moscow-Express that Antoine de Saint-Exupéry found a source of inspiration that would give way to his most famous work. This historic line, which had existed for more than a century, was suspended in 1994. Until then the rail lines changed suddenly at the Russian border, lending the journey a rather epic quality: the bogies – the wheel frameworks on which the carriages were carried – had to be changed in Belarus. Despite this technical challenge, and the lengthy journey times, the line was a big hit, even several years after the Cold War.

However, while the international situation calmed a little, the line was abandoned, without much explanation at all. The years pass and with planes now having very much superseded train travel as the main form of international transport, many forget all about it. Until the day Consuelo de Haviland, believing the railway service was still running, decided to call up SNCF to book a trip from Paris to Moscow.

At this time, she split her time across two capitals. Having acted on screen for Jacques Demy, Patrick Bouchitey and Cédric Klapisch, her career took a very different turn when she signed up for three seasons playing the title role in a play by Chekhov in Moscow. Her various engagements meant she had to take return flight after return flight, but then two significant events took place – and not all passengers were to come out alive. In the first instance, a plane she was travelling on got caught up in the vortex of a storm. Panic on board, and control of the aircraft was temporarily lost. One passenger had a heart attack. And in the second instance, a fire broke out in the aircraft, which was already in mid-air. After that, she really didn’t want to fly again.

That’s when Consuelo remembered the first time she’d travelled to the USSR, in 1986, and had taken the train for 56 hours. So she called up SNCF to find out whether this train was still running to Moscow. The person on the other end said there was no longer such a service. Consuelo asked why. The only response she got after that was: ‘We have no information for you, because we don’t speak to the Russians.’

So she had to continue to take the plane to go to Moscow, though she didn’t stop wondering why the railway line had been cut. In Moscow, having already made a lot of enquiries on the subject, she ended up bagging a meeting with Vladimir Ivanovic Yakunin. He was the president of the RJD, the Russian national railway firm, which had a whopping 1.5 million employees at the time. During their meeting, after she expressed her surprise at its abrupt ending, he explained that he hadn’t received a single response from the managers of SNCF (the French national railway firm) since 1991.

That’s when the president of the RJD jumped on the opportunity to tell her: ‘You’re French, do something about it.’ So while she had gone there to ask for an explanation, she left with a mandate from the RJD to discuss the issue with SNCF. On her return to Paris, she met the person in charge of international affairs of the French firm, to whom she explained that she can’t understand why the business would overlook that market completely. She came away with an official letter from the SNCF to the RJD, which she then placed in the hands of Vladimir Yakunin.

Consuelo managed the incredible task of getting all the major actors around the table, and very soon after that, Russia decided to send a ministerial delegation to France. She thought she’d played her part already, but that wasn’t the end of the tale: Vladimir Yakunin charged with getting his train – which she clearly desired so much – back on the rails. For the next 27 months, she would be tasked with coordinating French, Russian, German, Polish and Belarusian officials to make it happen.

On December 10 2007, the return of the Moscow-Paris line was celebrated with much fanfare. Ten carriages made the 36-hour trip between the two capitals. Few people had believed she’d actually make it happen, but she defied the doubters. And the RJD later even expanded the service to bring back another legendary line – from Moscow all the way to Nice.

Today, sadly, the lines are empty once again; there are no services running between Moscow and Paris, nor Moscow and Nice. The pandemic and resulting travel restrictions have made the journey impossible. But while we wait for the lines to start up again, Consuelo has her eyes set on another railway route that would be equally symbolic: the Seoul-Pyongyang line. We wouldn’t put it past her.