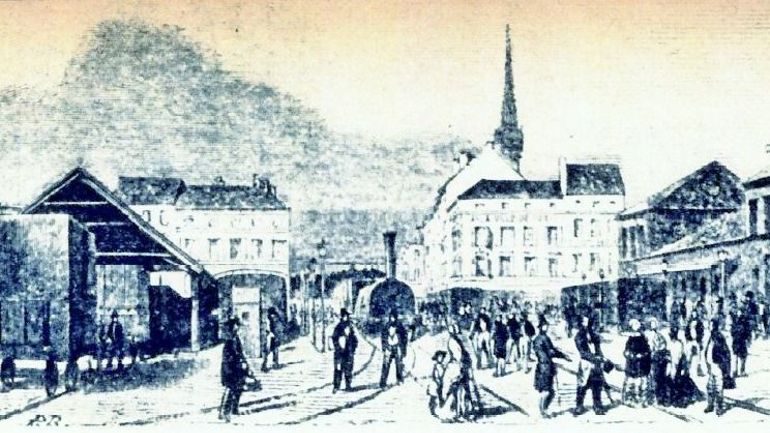 If you’re neither a railway geek nor an expert in historic French-Belgian transport links, the news may have passed you by: back at the start of summer, several train aficionados celebrated 175 years since a very special service ran between the French and Belgian capitals for the first time. So now, once again, let’s travel back in time to understand why exactly this service is a little more notable than your average Thalys train that runs between the two cities today.

In previous editions of Midnight Weekly, you’ve probably noticed that the nineteenth century was the period when the railways really got going. Politics, economics and a general ambition to spread influence all over the continent – all combined to accelerate technological progress and led to the development of rail lines across Europe.

For both the French and Belgians, the Paris-Brussels service was no exception to this. At this point in time, Belgium was a very young nation that had declared independence from the Kingdom of Low Countries in 1830 (before being recognised as completely separate in 1839). Having not yet been able to spread their wings as an independent nation, the Belgian leaders really wanted to exert their influence across the continent, while their anxious neighbours prevented them from accessing the sea from the Scheldt river. The railways were to prove their lifeline.

And they really did go for it. With a generous lot of public money, which hardly wavered, the country was within a few years to create a link between the Scheldt and the Rhine – that is to say connecting Belgium with the German Confederation (the antecedent of today’s Germany) – that also passed through Antwerp, Mechelen and Liège. France was the next priority.

France was also ploughing ahead with new train lines, no doubt in an effort to compete with the UK: the birthplace of the railways. After all, this was the 1840s, only a couple of decades after the Battle of Waterloo – far before any congenial relations had started between the two countries.

By contrast with the Belgians, the development of the railways in France was erratic. There was heated debate over where the funding should come from, the country not exactly being as wealthy as it is now. So it was fortunate, then, that one of its citizens was James de Rothschild, a rich banker who took it upon himself to get involved in the railway sector. He set up the Compagnie du Chemin de Fer du Nord, which was to make possible the Paris-Lille line inaugurated in September 1945 (a predecessor of the Brussels line).

But for its part, why was Paris so set on having trains to Brussels? Quite simply because Belgium was in the middle of an industrial boom and that provided a great opportunity to transport goods their way (especially considering France itself was not doing brilliantly economically). So freight trains were the priority, but passenger services were soon to follow.

It’s in that context that on Sunday June 1, 1846, three trains decorated in the colours of the French and Belgian flags set off on a ceremonious inaugural trip, in spite of several protests: the choice of a day of mass was criticised by the religious, while those workers who’d toiled day and night to construct the line weren’t invited. Not cool.

In fact, only the most sharply dressed were on board: in the French delegation, you had sons of the last king of France, Louis-Philippe, the Duke of Nemours and the Duke of Montpensier; on the Belgian side, you had King Léopold I.

And boy was it a lengthy trip: some 12 hours and 30 minutes in all. The train arrived in Lille in the evening before finally making it to Brussels the next morning. The sleeper train was born, largely because it couldn’t go any more quickly, and at that time, only the very wealthy would’ve been able to take such a trip.

Today, things have very much changed. Around 25 years ago, the Paris-Brussels line entered a new era thanks to a new high-speed line, the Thalys. And so now we will tell you a little bit more about one of those people responsible for its success.