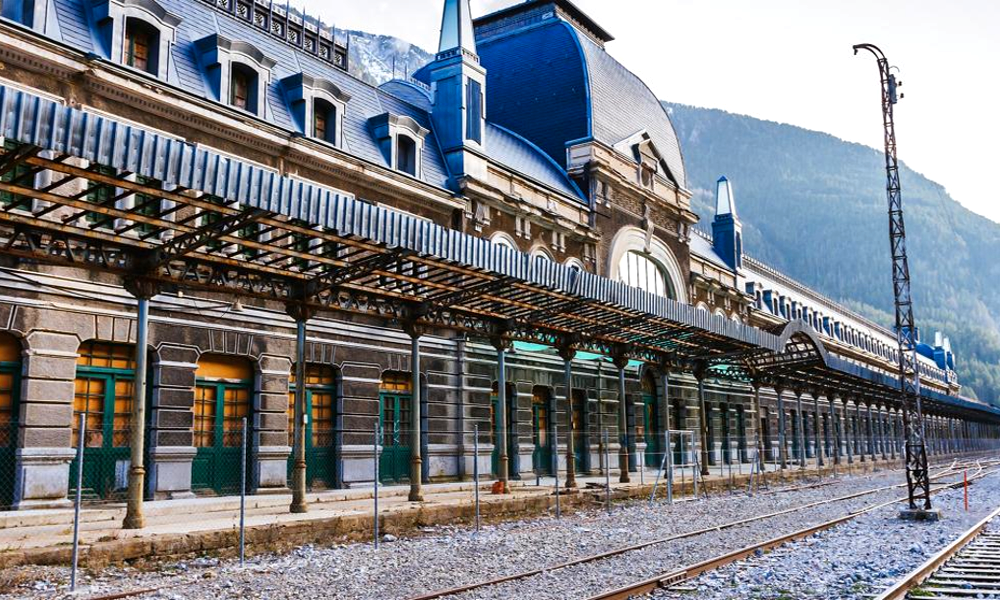 A brief stopover in the ghost station of Canfranc

We are going to be travelling through the Pyrénées, not far from the Franco-Spanish border. To be precise, we’ll be stopping off at the international train station in Canfranc, which is often referred to as the Flying Dutchman of the railways. As majestic as it is haunting – and certainly bizarre – this station has a very curious history and will no doubt spark the interest of anyone passing through.

Its architecture alone makes it worthy of a visit. It’s a sort of replica, half-way between the Musée d’Orsay (once a train station) and the Gare Saint-Lazare in Paris. Built at an attitude of more than 1,000 metres, the now-derelict building has a 140-metre-long facade, studded with 365 windows and 156 doors – making it the second biggest station in Europe. You’d almost think it’d been intended to become the epicentre and most significant crossroads of the old continent.

It all started in the nineteenth century, that golden period for the railways. To get from France to Spain at the time, you could cross the border by travelling through the Pyrénées either in the west (at Hendaye-Irún) or in the east (at Cerbère-Portbou). A train line cutting right through the mountain range seemed like a good solution to avoid the lengthy hikes. That’s where Canfranc came in and, upon its flashy inauguration in 1928, passengers were able to make use of myriad features: a luxury hotel, bureau de change, border controls, a restaurant and even a library. So far, so smooth.

But then came difficulty. Even at its busiest times, only 50 travellers would make the trip to this palace-station in the middle of nowhere. Why? It took a day to travel the 310km between Pau and Zaragoza, and even if this architectural jewel may have been worth the trek, most people thought they had better things to do. And then, there was an avalanche of further misfortunes: a fire broke out in 1931, just as the Spanish civil war was about to complicate things more in 1936.

The Second World War followed and if the ghosts of Canfranc were to tell us what they saw, they’d be able to go on and on. The station bore witness to the Nazis’ looted treasure – on its way to their Francoist allies and accomplices (and often exchanged for iron ore and tungsten). At other points, Canfranc hosted hundreds of Jews and resistance fighters fleeing collaborationist France, thanks to the courageous actions of its customs chief, Albert Le Lay.

In the second half of the previous century, as things gradually returned to normal, you might think the station might get a second chance. It didn’t. Though the SNCF started another service from Pau, a succession of mishaps culminated in the tragic derailing of a train that led to the French national operator to stop all services through the station altogether. Like Sleeping Beauty, it’s been in a deep, deep sleep ever since.

Over the years, with trains now absent, the station has been overrun by wild grasses. There have been various efforts to revive the train station in the decades since it was abandoned, but little progress was made. So the municipality of Canfranc, determined not to leave the place sitting entirely empty, has taken things into its own hands. And after much debate and wrangling, it’s now due to become a one-of-a-kind hotel.

And yes, it’s really happening. On July 28, the first cornerstone of this future five-star hotel was laid, reviving this truly historic building which won’t be abandoned to the elements after all. And will the trains make a comeback too? That’s an open question.

There are a handful of stories from the time still well worth sharing. One pretty much guaranteed to make you smile is the one known as the tale of the Tsar’s finger.