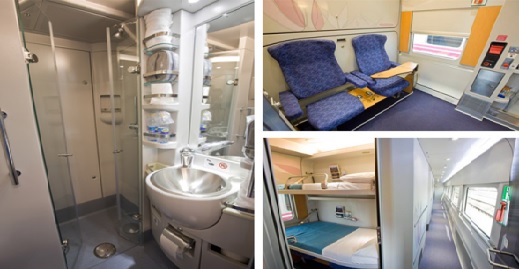 Episode 1 – Trenhotel: the glorious past of the Spanish sleeper train

Since they were invented by George Pullman and Georges Nagelmackers, sleeper trains have appeared and disappeared from the railways, subject as they are to the whims of fate and history. But rather than ruminate on the legendary trains of another area, like the Orient-Express, we’re launching the first in a new series of articles dedicated to those which have been taken off the rails more recently. To start, we’ll be considering the case of Trenhotel, the glorious sleeper run by Renfe, the Spanish national rail provider.

The name Trenhotel has the merit of being very clear. Launched in 1991 by Renfe, these trains essentially aimed to be trains and hotels at the same time. In other words, they would allow passengers to spend the night in a well laid out, comfortable train, with excellent on-board service. Basically, they had a very similar mindset to us here at Midnight Trains.

To live up to their rather ambitious promise the Renfe teams had to work doubly hard. From the outset, they had kitted out their trains with self-service, a cafeteria and restaurants with diverse menus, often put together by renowned chefs. Passengers in higher classes even had breakfast included, along with access to a lounge and free parking in their city of departure. In essence, it offered everything a hotel could, but with the journey included too.

And the best thing? Trenhotel wasn’t uniquely the preserve of the rich. There were eight different classes overall, four containing classic seat arrangements and four others featuring cabins. Those who chose to sit could either go for an ultra-basic option or pick reclining seats that would almost allow them to lie down completely.

There were cabins for all budgets, too. The most accessible, called cama turista, comprised two bunk beds and a small sink. The most luxurious, the cama gran clase, were laid out in a similar way, but were far more spacious. But crucially, they held an actual, perfectly functional shower. In other words, travellers could arrive at their destination fresh, well slept, more than ready to tackle a day of work and sightseeing.

But it should be noted that not all versions of the Trenhotel contained exactly the same things. For example, certain classes weren’t available for certain destinations, and the same goes for the food. Why? Trenhotel divided its services up regionally, and that was in fact reflected in the name of its trains. The one linking Barcelona and Granada, for instance, was called Alhambra, in reference to the Andalusian city’s famous palace, while that connecting Cádiz and the Catalan capital was named after the great poet Antonio Machado.

However, the Trenhotel services were soon to come to an end, in two stages. First, international links with France, Switzerland and Italy – operated by Elipsos under the name Trenhotel – were gradually stopped between 2012 and 2013 for various reasons. And the Covid-19 pandemic signalled the final nail in the coffin for the domestic services too. Having been paused like the rest of the Spanish train network, the trains were to remain the hangar even while other services restarted – much to the chagrin of the public and public commentators alike. Restarting the trenhotel services simply wasn’t a priority for Renfe.

After Trenhotel went, a large part of European sleeper-train culture disappeared too. Happily, as we’ve talked about in our series on the new actors shaking up the Euro rail industry, several businesses (like Midnight Trains) have launched to pick up the slack. And you’ll no doubt have noticed there are plenty of similarities between the initial philosophy of Trenhotel and that behind our ‘hotels on rails’. That said, rest assured that we don’t envisage our trains looking much like those the Spanish engineers of the 1990s came up with. And we can’t wait to show you what they’ll be like instead. See you soon!