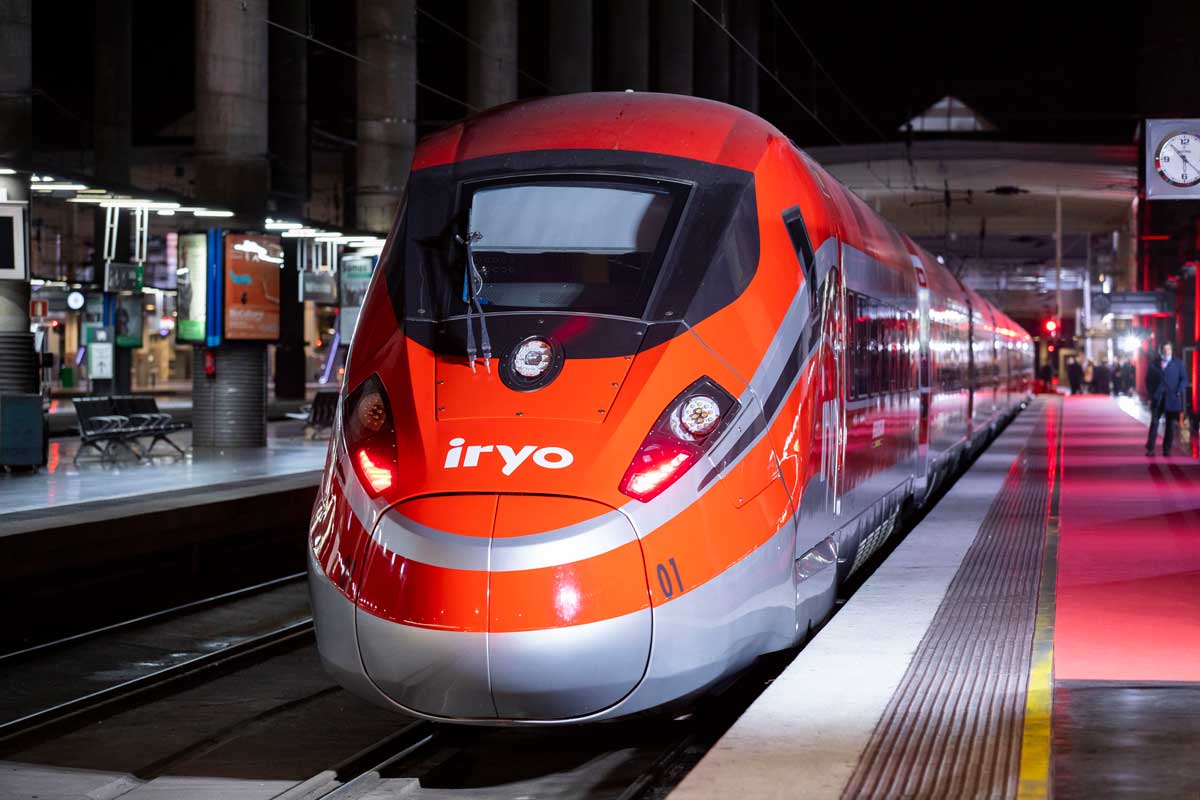 There are all sorts of reasons you might want to visit Spain. The food and the sunshine spring to mind. But the country also has loads of fascinating bits of railway history, including abandoned sleeper trains, the particularities of its train infrastructure and a metro system full of fascinating secrets. And it’s also a pretty good place if you’re into taking trains too, especially because a new rail operator, Iryo, has just launched. Part owned by Italian group Trenitalia (49 percent), Spanish airline Air Nostrum (31 percent) and infrastructure group Globalvia (24), is the third firm to run high-speed services in the country. The two others are Renfe, the best known and established, and Ouigo, a subsidiary of France’s SNCF.

Having run an inaugural trip between Madrid and Valencia on November 21 2022, Iryo aims to run 16 return journeys daily between the Spanish capital and the city of Barcelona. Starting from December 16, the company will also run eight daily return trips between Madrid and Valencia. And its services will expand even further from 2023, with services running all the way to Seville, Malagá and Alicante from June.

Achieving all this hasn’t been cheap. The business invested a billion euros in 20 Frecciarossa 1000 trains (aka ETR 1000 or Zefiro V300). According to the Trenitalia website, these machines can reach a speed of 400 kilometres/hour thanks to ‘16 motors distributed across all carriages’. But above all, they are pretty eco-friendly, having been the first such vehicles to obtain an EPD certification, with relatively low CO2 emissions per passenger per kilometre. Plus, the materials used in construction are almost 100 percent recycled.

The branch of Trenitalia involved in this project aims to serve 30 percent of total passengers on the lines used by its trains. It’s already signed a deal with Amadeus, a world leader in online bookings, which should help. But above all, Iryo is targeting a very specific market – business travellers – which will only continue to grow over the coming years.

The operator only launched 18 months after Ouigo, but has managed to succeed thanks to various policies brought in by the Spanish government. In 2019, Adif (Administrador de infraestructuras ferroviarias), which manages the national rail network, put out a tender to run its high-speed lines, in an attempt to lower the prices. Opening up the market to competition has helped increase railway traffic by 13.7 percent in a year, and 37 percent on high-speed lines. According to industry observers, the launch of the SNCF subsidiary on the Madrid-Barcelona line has helped lower prices by 49 percent, while Ouigo has apparently racked up an incredible two million passengers since its launch.

Having three high-speed operators in a single market is unprecedented, and highlights several interesting issues. One is that it shows that a controlled opening-up of the market can make trains more comfortable and cheaper for passengers. And perhaps most importantly, it also shows us that it’s principally subsidiaries of historic operators who are profiting most from such changes (and to be specific, Trenitalia and SNCF).

Regardless, the arrival of Iryo is certainly a good thing for the sector. Because one thing it shows is that even within the vast, well-established railway networks of Europe, there is still space for new companies to emerge. By doing things right, and with adequate government support, the railways can welcome new high-speed rail operators and indeed new sleeper train companies. It must, of course, go hand in hand with investment in small local lines (and perhaps even involve reviving old services that have long ceased to run). Because a well-run railway network must be extensive, diverse and inclusive. At least, that’s how we see it at Midnight Trains.