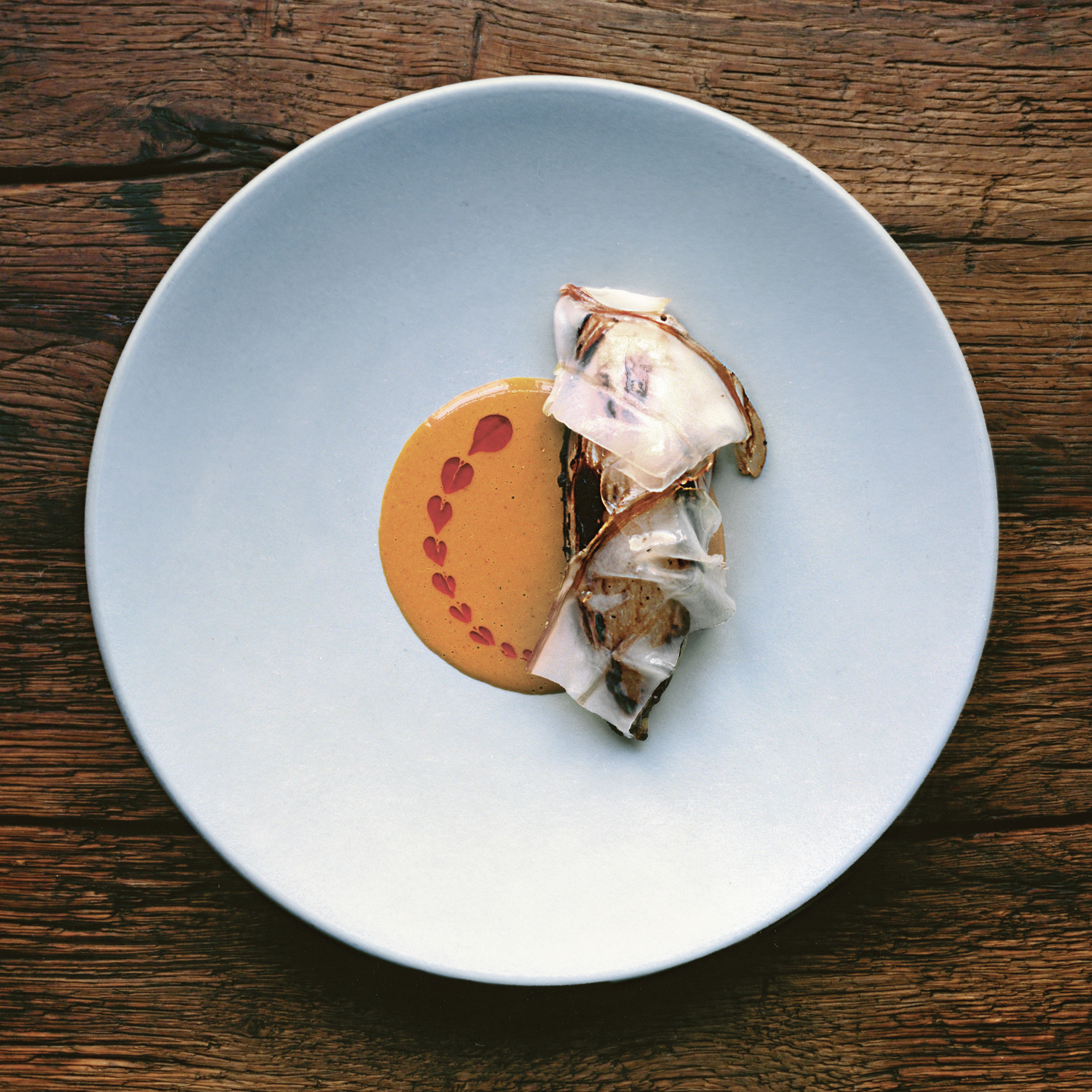 It’s become a go-to for gourmets from across the globe. Open since 2011, Parisian restaurant Septime has become one of the culinary epicentres of the bistronomie scene.

Having already gifted us his recipe for that Parisian staple, oeuf mayonnaise, head chef Bertrand Grébaut has shared another, this time from Septime, la Cave, Clamato, D'une Île, a true cooking bible that would probably keep you going for years. Here it is: chicory braised in savagnin.

For the paprika oil

Cool the sous-vide bags in a salad bowl filled with icy water. Drain the chicories, dry them and place them on a smoking rack for 30 minutes. (The sous-vide cooking water can’t be used again, as it will be too bitter-tasting.)

In a saucepan on a high heat, make the sauce by mixing the apple juice and honey until you obtain a thick, syrupy consistency. Deglaze with the cider vinegar, as the syrup starts to colour. Once at room temperature, the liquid should be smooth and an amber/caramel colour.

Shell the mussels while making sure to retain 40ml of cooking water.

Mix the warm mussels, cooking water and savagnin (reduced to increase acidity) in a blending bowl (on the most vigorous setting). Add the paprika and whisk in the butter gradually over the course of one minute. Strain through a sieve. Adjust the seasoning if necessary.

The sauce should be made from scratch each time you serve the dish, then kept warm. It shouldn’t be boiled (so you retain the flavour of just-opened mussels and also so it doesn’t curdle).

With the help of a pastry brush, cover the chicories in grapeseed oil then grill them on a very hot barbecue, until they are very well coloured. As they cook, cover them regularly with the apple sauce (again, using the brush).

Season every surface of the chicories with a generous pinch of sea salt.

Make the paprika oil by mixing the olive oil and paprika together.

Place one tablespoon of mussel velouté in the middle of the plate, dotted with a few drops of paprika oil. Place the chicory on top and two slices of lard on each.

Take a gastronomic journey with the respected chef Sugio Yamaguchi, who takes as his aim the exploration of produce; going as off the beaten track as possible. That makes sense for this Tokyo local who plied his trade in Lyon initially, before really making his name at Botanique (Paris) over several years.

The ever-innovative Désirée was founded in Paris in 2017, under the aegis of Mathilde Bignon and Audrey Venant. Both very into their flowers, they opened a first, then a second, café-florist – so you can sip coffee surrounded by all manner of brilliant sights and smells.