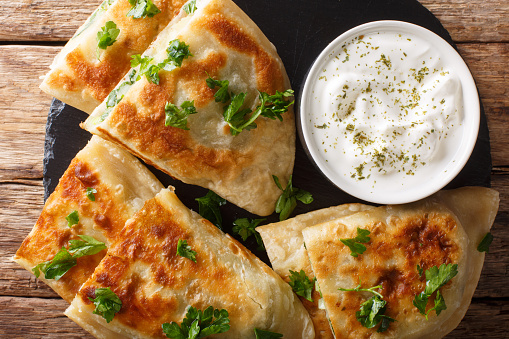 An Afghan recipe that’s made for winter

Housed in a building overlooking the Seine, Les Amarres places humans at the core of its identity. During the day it welcomes 300 people including families, refugees and pregnant women with a precarious housing situation. A number of services are available to them here: administrative help, French lessons, support from social workers, a place to wash and relax, free meals.

From 6pm from Wednesday to Friday, and throughout the weekend, the building is also open to the wider public: drinks, aperitifs, board-game afternoons, DJ sets (when health restrictions allow it) all draw a real melting pot from across the capital. And the food on offer reflects this: the families welcomed during the day can cook meals and sell them. To give you an idea of the kind of thing you can eat here, here’s the recipe for boulanis, an Afghan speciality, which was recently on the menu. Bon appétit!

For the stuffing
500g potatoes
Four spring onions
A bunch of cilantro
Two green or red chillis (or more, if you wish)
One teaspoon vegetable oil
Salt
Pepper

Peel and cut the potatoes into fours. Place them in a pan filled with water and leave to cook for 30 minutes. Once they are cooked, mash into a puree with a fork. Put to one side.

Next, roughly chop the cilantro, and finely slice the spring onions and chillis. Mix these ingredients together with the potato, oil, salt and pepper. Set to one side.

Time to make the dough. In a large bowl, mix the flour and salt. Add the oil and mix again. Add the water, little by little, as you knead the mixture. Keep kneading until you obtain a smooth consistency. Cover and leave to rest for 30 minutes.

Divide the dough into six parts and roll each as finely as possible. Take a sixth of the stuffing and place it on one half of each bit of dough. Wrap up the stuffing using the other half of the dough and close by pressing edges together rather firmly. Do the same for each of the six boulanis.

Using a pastry brush, oil a large saucepan and put on a medium heat. Place your first boulani on the warm pan and leave to cook for three minutes before turning over and cooking it on the other side for two minutes. Do the same for the rest of the boulanis.

The bakery in question is Nice’s Zielinska. Its founder, Dominika Zielinska, has been serving up delicious baked goods for two years now, and it was recently honoured by the Guide du Fooding. But you won’t find any baguettes or croissants here. Instead, everything is made using ancient grains and has a lengthy fermentation process.

Francesca Riccò recently decided to leave the city and set up a base over the border in Nice. You’re now able to sample her masterful cuisine at Babel Babel.