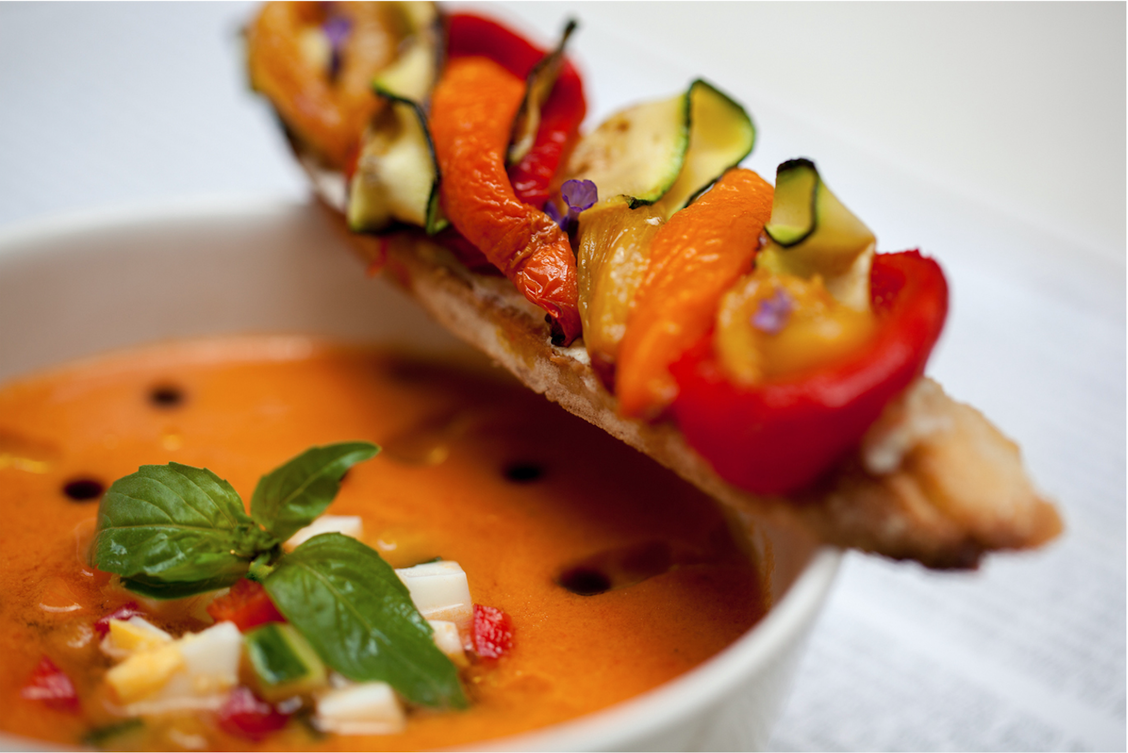 Now for a Spanish meal

It’s been a pretty long time since we last sat down in a proper train restaurant, and Midnight Trains aims to redefine what it means to eat on the move. Until then, we’re asking chefs to share recipes related to the destinations that we spotlight each week. This time we went to Bérangère Fagart, the much-hyped chef from Sélune in Paris, who sent over an excellent gazpacho recipe. This classic Spanish dish, a cold soup, is often served as an aperitif or starter, and is a go-to when the temperature really starts to rise. The lavender she adds makes for a truly original southern touch.

Start by preparing the summer veg to top the crouton. Finely slice the courgette, place in a pan and brown in a little olive oil. Set aside.

Slice the peppers into strips and lightly brown in the same pan.

Grill your slices of bread. Top with the cooked veg and a few sprigs of lavender.

Peel the tomatoes (after plunging them, briefly, in a pan of boiling water).

Place all the veg, a little olive oil, vinegar and basil in the blender and mix until smooth. Season to taste. Place in the fridge.

Boil an egg for nine minutes until hard. Remove the shell and chop roughly.

Pour the gazpacho in a bowl, drizzle with olive oil and a few drops of balsamic. Add some egg, basil and a few sprigs of lavender. Place your crouton on the side and serve.

As an accompaniment, especially if you’re serving the gazpacho as an aperitif, we recommend you crack open a bottle of the 2019 Salmónido by Barranco Oscuro. This dark rosé with smoky notes is the work of Manuel Valenzuela, a natural wine pioneer whose vines, in the Sierra de la Contraviesa, are the highest in Europe (some 1,368 metres above sea level).

We asked chef Alessandro Candido, founder of Paris restaurant Candide, to share a recipe he’d recommend you try on arrival in Florence.