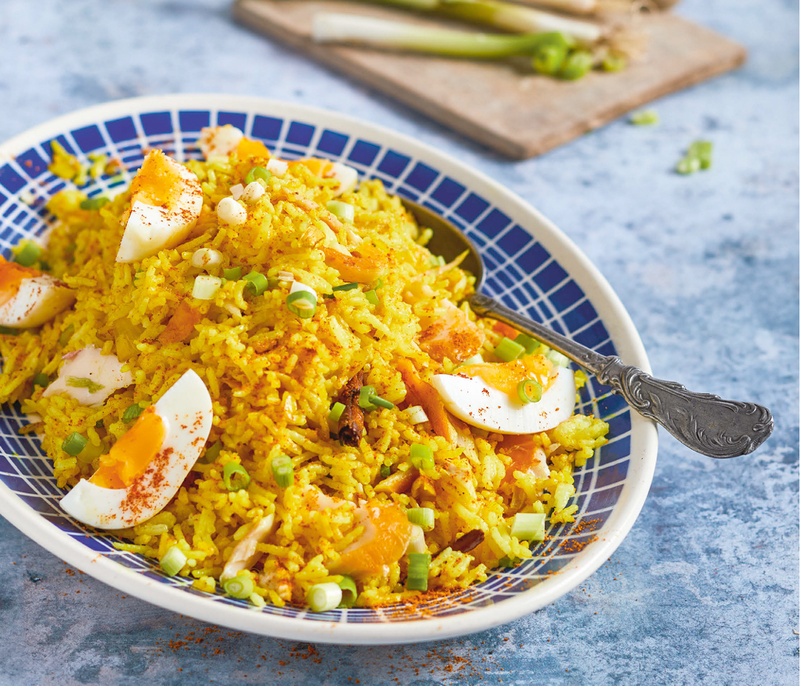 In the previous edition of Midnight Weekly, Estérelle Payany initiated us in the art of creating true culinary gold from the leftovers in your fridge. This week, we’ve invited the respected critic and chef to provide another recipe – this time from the UK.

This delightful dish appears in her latest cookbook, ‘La cuisine des beaux restes’, in which she explains how to cook in a more environmentally-conscious way, while also saving food from being thrown away.

Here are a few words from Payany on her choice of recipe: ‘Within the realm of similar fried rice dishes, kedgeree might well be the most fascinating, with its history dating back to the British colonisation of India. A joyous mix of rice, haddock, curry powder, soft-boiled egg and loads and loads of butter, it is perhaps the perfect brunch dish. Into your TV? You may well recognise kedgeree from Downton Abbey and The Crown.

Ingredients for four to six people

Cook the eggs in boiling water: eight minutes for a still-slightly-runny egg, ten minutes for a hard one. Cool them in running water, gently crack the shell and remove it while soaking the egg in cold water. Set aside.

Poach the fish in the milk and water with the bay leaves: let it come to the boil and cook for ten minutes. Remove from the sauce, peel off the skin and divide into large pieces.

Peace and roughly chop the onion. Open the cardamom pods with the point of a knife and remove the grains.

Brown the onion in the butter. Add the cardamom grains, the curry and cinnamon. Turn for a little while, then add the rice. Mix well, then add the fish and eggs (cut in two or four)

Add the coriander and spring onions (both chopped up finely). Serve on a plate with the lemon quarters.

Top anti-waste tip: this dish goes well with leftovers including peas, any kind of cooked fish and even other kinds of curry sauce.