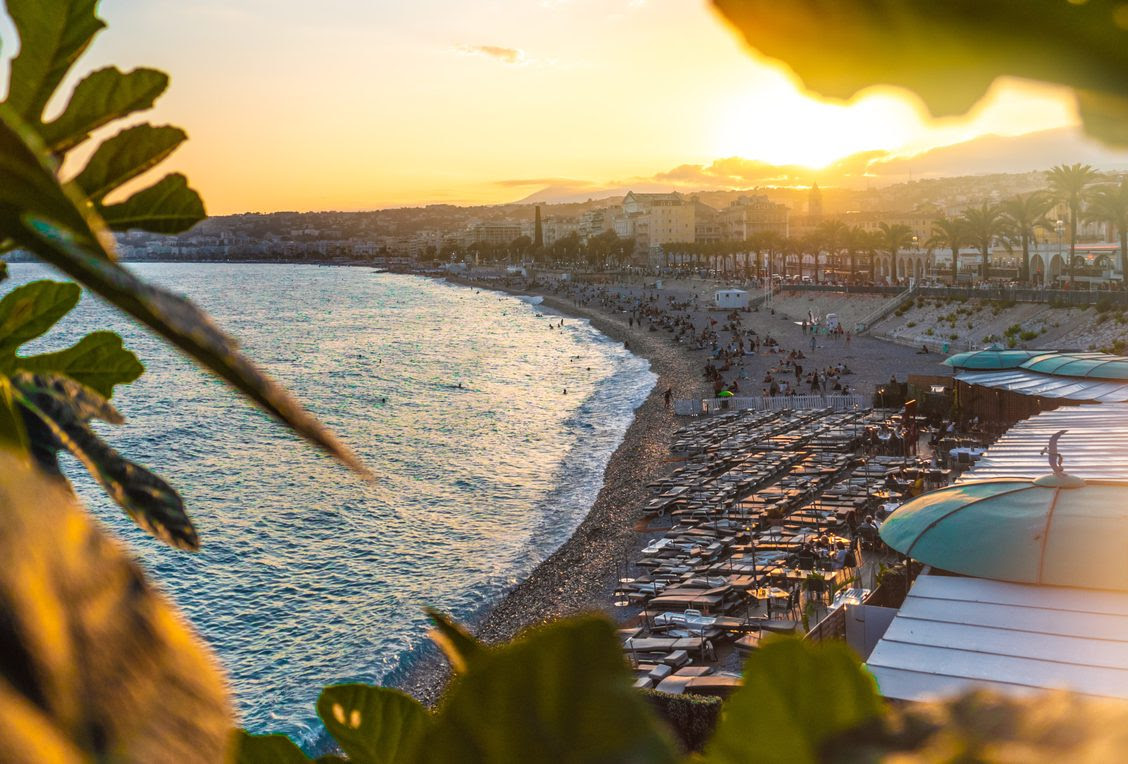 Having previously sung the praises of Paris and Marseille, in this edition of Midnight Weekly we’ll be heading to Nice, the dazzling capital of the Côte d’Azur. Or rather, Nissa la Bella, as the proud locals refer to it. And they have good reason to be, their home city being as radiant as it is (and so important inspiration for so many artists past and present). Without further ado, let’s head on a brief tour.

The best way to start is to get lost in the labyrinthine backstreets of Vieux Nice. The beating heart of the city, these streets can get narrow and rather steep in places, and the buildings were painted to shine bright in the sunshine (which, by the way, seems to be ever-present in this luminous city). Locals and visitors alike meander around here, both day at night, and for the best feel of the real Nice, you’ll want to head down for the market on the Cours Saleya, whose fruit, veg and flowers add another splash of colour to this already vibrant side of town.

Since you’re in the neighbourhood, you may as well climb up the Colline du Château which overlooks the old town. You won’t be able to find the castle in question, as that was destroyed by Louis XIV in 1706, following one of several wars with former state the Comté de Nice. But that doesn’t detract from the impressiveness of the scenery here. The very top of the hill has some of the finest views over Nice. Head up here, and you’ll immediately understand why artists including Henri Matisse, Auguste Renoir, Marc Chagall, Yves Klein and Pablo Picasso have all found inspiration in this city. For the absolute best panorama, go to the Tour Bellanda, from which you’ll be able to take in a vast swathe of the Mediterranean.

You’ll definitely have made sure to bring a towel and swimming costume with you, and good thing. In Nice, the Med is never far away and it’s pretty hard to resist a dip, whether you’re ambling along the iconic Promenade des Anglais or kicking back in the La Réserve enclave. Perhaps you’ll want to discover the region’s immaculate beaches: our favourites include the coves of Saint-Jean-Cap-Ferrat and the Cap d’Antibes, along with the pristine stretches of sand in Villefranche-Sur-Mer and Eze.

Those fond of hiking will also feel at home in this often-hilly region. The most seasoned of walkers will head to the north, where the Alps loom dramatically over the sea. The valleys of Estéron, Vésubie, Merveilles and Roya, despite being battered by storm Alex around a year ago, offer a multitude of possibilities. A little less experienced? Head to the village of Eze and the Chemin de Nietzche, which is where the German author and philosopher came to recuperate – and wrote the famous Thus Spoke Zarathoustra.

There’s so much else we could recommend in town. When it comes to culture, there are the Musée Matisse and Musée Chagall, which will immerse you in the colourful world of those two artists, while the MAMAC has many masterpieces by Yves Klein (and also puts on excellent temporary exhibitions). Not far from Nice, at Saint-Paul-de-Vence, you’ll find the Fondation Maeght, which will blow you away with its collection of major artworks by Miró, Braque and Giacometti, plus the stunning La Vie by Marc Chagall.

Come the end of the day, you should head back to the Promenade des Anglais to soak up the sunset: a truly remarkable spectacle in this part of the world. After that, it’ll soon be time for dinner, and this city abounds with amazing options. Nice has seen all manner of respected restaurants pop up over the past few years: Babel Babel has tip-top cocktails, decent-value food and unbeatable sea views; Epiro is your best bet for Italian (see below); Banh mei offers delicate Vietnamese plates in the old town; the menus at La Lavomatique and La Pêche à la Vigne are incredibly creative; Le Canon does some of the finest Niçois cuisine in town; and Pure & V is where to go for a really splashy treat.

Before you leave, you shouldn’t neglect to try socca, a chickpea pancake that’s become almost symbolic of this city: the very best can be found at Pipo. If you’re after a gourmet souvenir, try Zielinska, the finest boulangerie in town, where the speciality aniseed criscente is a real marvel, Maison Barale for Niçois ravioli served in a stew, or La Part des Anges, a wine cellar packed with excellent natural wines.

Marseille is a city of contrasts, and to really get a feel for it, it’s best to properly spend some time there – an extended holiday, say, rather than a flying visit.