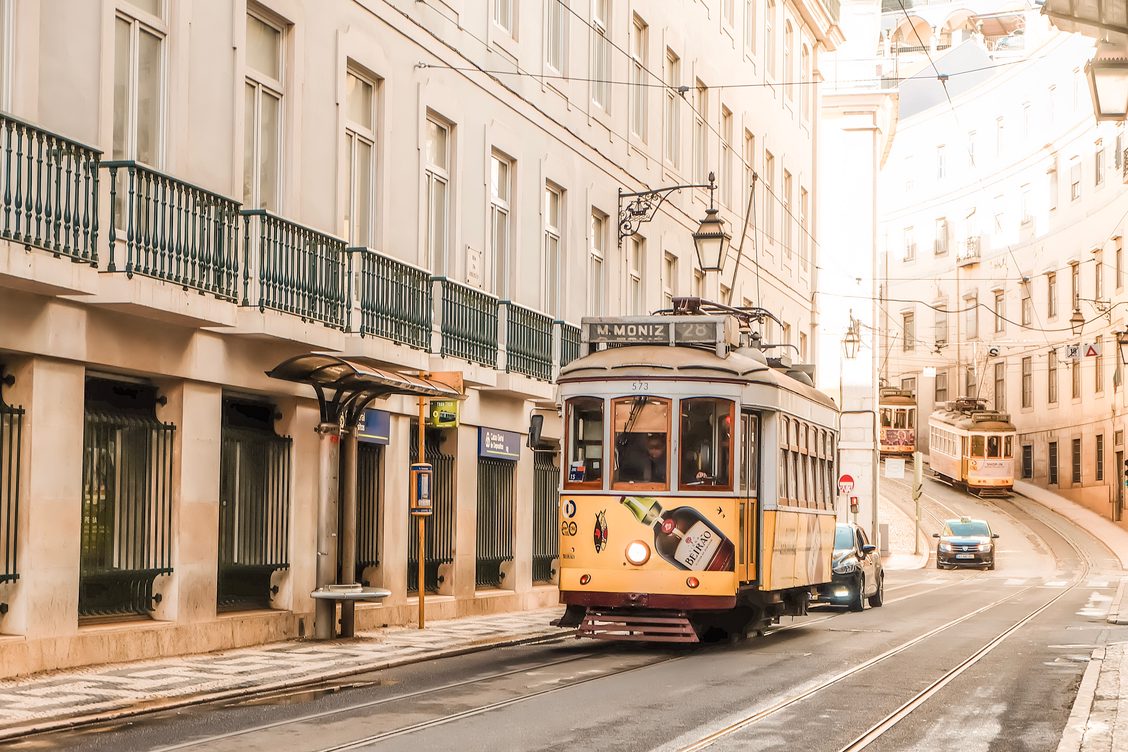 Lisbon is another one of the destinations our trains will take you to (and we’re actually a little embarrassed it’s taken us this long to pay homage to this beautiful city). For a long time its charms were unfairly overlooked, but over the past decade or so, this city has become one of Europe’s most exciting metropolises. Without further ado, take a trip with us through the winding cobbled streets of this city you’re likely to fall head over heels for.

Let’s start by immersing ourselves in one of the city’s most charming historic neighbourhoods, Alfama. To go to Lisbon without meandering aimlessly around this area’s labyrinthine alleyways would be to overlook the best way to understand what this historic city felt like in centuries gone by. Alfama is, in fact, Lisbon’s oldest neighbourhood and for a long time was inhabited largely by fishermen and sailors. Still today, the neighbourhood’s working-class feel comes across in the fact its star attractions are above all the people who call it home. We’ll say it straight up: you’re likely to get lost as you wander around, but that’s very much a good thing. You won’t want to come with a pre-planned itinerary here.

Next, you should hitch a ride on tourist favourite tram 28, with its striking original yellow design, and let the beautiful, colourful façades of the city centre parade before your eyes, glimmering in the sun. In Lisbon, we’d also recommend cycling: the ideal way to take a breather along the Tagus, which is fringed by excellent bike paths. You could even take your two wheels out to any number of beautiful beaches that give out onto the Atlantic. Very accessible from the centre of town, you could be lounging on the white sands of the Costa da Caparica in no time at all. There you’ll find something for all tastes, including LGBTQ+, naturist and family-friendly beaches.

Now head back into the centre and take in the city’s greener side. The city authorities have made a big point recently of giving the several neighbourhoods a more modern (and sustainable) look. The Parque das Nações is a case in point: pedestrians and cyclists have been prioritised above all, and there are several new green spaces. This is urbanism as its most eco-conscious; a remarkable transformation of what was until very recently essentially just a huddle of neglected warehouses.

The end of your first day is approaching – so let the night take the reins. Because Lisbon really comes alive as the sun sets. If you’re after a classic night out, head to the Alfama area, the historic home of fado music: undoubtedly one of the world’s most poignant lyrical genres. But if you’re more into the idea of dancing until the early hours? Rest assured that you’re in the right place. The city’s Docas (docks) are where to really let loose: grab a drink in one bar, then a second in another, and so on. Lisbon has few equals when it comes to going out out – so don’t miss your chance to dance away your first night in the city.

The next day, you’ll likely be waking up pretty late, and that’s probably for the best. When do you get up, head straight over to Belém, a neighbourhood that buzzes every hour of the day. You’ll probably get through your trip without experiencing any of that feted saudade, that Portuguese term that sort of matches up with (but isn’t entirely captured by) the word ‘melancholy’ and which Fernando Pessoa defined, magnificently, as ‘the presence of absence’. To really make sure you don’t get there, or at least to attenuate the bad vibes if you do, head to Antiga Confeitaria de Belém, the mecca of pastéis de nata, those custard tarts that you’ll find all over the world now (but taste so much better in their country of birth).