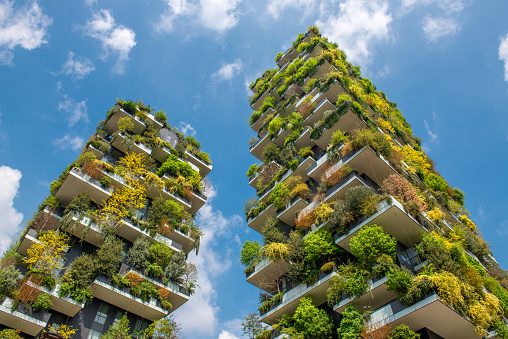 For a long time, Milan was considered above all to be the beating heart of the Italian economy, and its cultural influence was underplayed. But to overlook all the amazing things to see and do here would be a mistake: the divine trattorias, the massive art museums, the rich architectural history and thoroughly modern urban design – this, of course, being the home of Italian fashion and design too. It’s no surprise the city was chosen as the host of the last Exposition Universelle in 2015 and that it will be hosting the Winter Olympic Games in 2026.

It’d be pretty odd to not visit the Duomo, the biggest catholic church in the world after Saint-Pierre in the Vatican, but after that we’d suggest you go and contemplate one of the architectural stars of the Exposition Universelle: the Bosco Verticale. Just around the corner from Milan-Porta Garibaldi station, you’ll find this green tower designed by nature-loving architect Stefano Boeri. Its façades are covered in trees, bushes and other foliage, which turn from green to yellow to red with the seasons.

It’d also be pretty odd to go to Milan without indulging in a spot of clothes shopping. Italy’s fashion capital will ravish you with its brilliant array of creators (and their dazzling showrooms dotted across the city). It’d suffice to have a quick mooch around the Monte Napoleone neighbourhood to get a good sense of the richness of the goods on offer here. And if you thought the boutiques were colourful? Then get a load of the city’s markets. You could easily spend a couple of hours browsing the stalls of Papiniano in the Navigli area: the fruit, veg, species, cheese, charcuterie, flowers will all do a good job of selling the Milanese modo di vivere.

Okay, so you’ve filled up on food, but if you’re hungry for culture? You’re in luck, as there’s no shortage of museums in these parts: the Triennale Design Museum showcases historic pieces created in this style-conscious city, while the Pinacoteca Ambrosiana offers you a rare opportunity to get up close to the Codice Atlantico, Leonardo da Vinci’s epic 12-volume set of manuscripts. And you won’t want to leave this city without having seen The Last Supper, which the Italian polymath painted and exhibited in the refectory of the Santa Maria delle Grazie monastery.

And finally, because you’re in the città delle occasioni (the city of possibilities), round off your day by walking along the canals that bring to mind their more famous counterparts in Venice. The canal quarter is undoubtedly one of the city’s most buzzing areas: boutiques, bars, trattorias all outdo each other in the creative stakes, while night owls have made it their go-to place to go out (and stay out until late). A walk around this area is necessary for anyone who wants to live like a Milanese – until midnight and beyond.