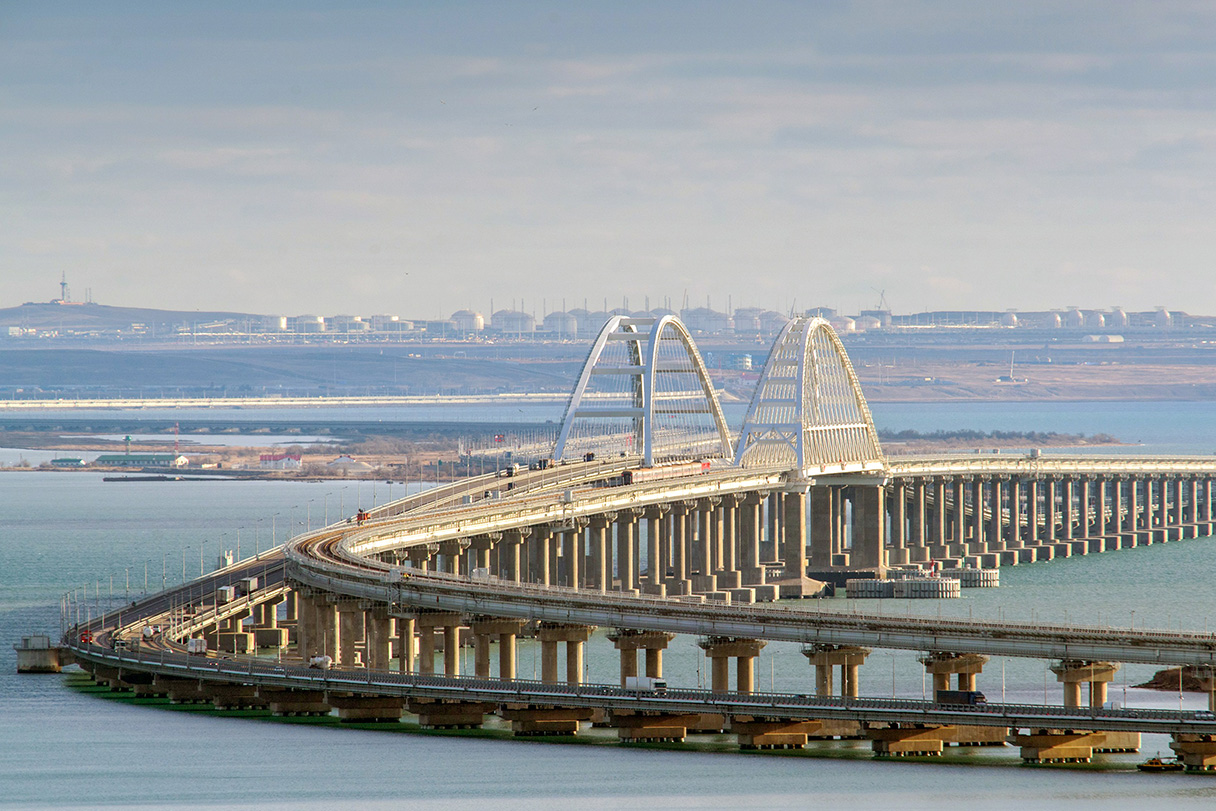 How Russia cut Crimea off from the rest of the world

Imagine you’re looking down on the earth. You’d notice our planet is criss-crossed with tons of natural arteries – rivers – but also a just-as-impressive railway network, which has become essential to us humans getting around. In fact, there are now no fewer than 1,115,000 kilometres of railway tracks around the world.

Quite incredible, when you think about it. Or not. Trains have become crucial not just for transporting humans, but all the stuff we produce too. And that’s not all. This week, we’ll be lifting the lid on an application of the railways that is perhaps best viewed from space. Because while the general tendency of the rails has been to connect nations, to share goods ideas and to bring people together, in some cases they’ve been used to divide and cut regions off from the rest of the world.

Let’s look closely at the latest railway developments in Russia, where ever since trains first took off in the nineteenth century, they’ve become indispensable for all leaders of the world’s biggest country – largely to ensure all its disparate regions are well connected (think the Trans-Siberian Express and all its relatives). That focus on trains has given way to all sorts of amusing episodes such as that of the Tsar’s finger.

However, since the end of the Soviet Union, the railways have been at the centre of geopolitics in Eastern Europe: on the one hand, some have tried to establish new links with Moscow; on the other, it has allowed other young eastern democracies to emancipate themselves from the Kremlin’s sphere of influence. And in a more controversial case, there’s Crimea, where the railways allowed Russia to annex this strategic region.

For anyone who controls it, Crimea opens up a precious means of access to the Black Sea. Over the centuries, Greece, the Ottoman Empire, the Russian Empire and finally the Soviet Union all occupied it. When the Wall fell at the end of the Cold War, Crimea became an autonomous territory within Ukraine, with the geographically strategic port of Sebastopol – where Russia had had a naval base since 1783 – remaining a free city. However, this new state of affairs didn’t please everyone.

Not least the Kremlin, which could count on the support of the Russian-speaking community within Crimea. But while the Ukrainian authorities were still on amicable terms with Moscow, all would remain stable. Until 2014, that is, when Kiev would fight back against the pro-Russian Maidan Revolution (also known as the Revolution of Dignity). The movement won out and Ukraine swiftly exited the Russian sphere of influence. Moscow then pounced and invaded the entire region. The consequences are still reverberating today, with talk of a larger-scale attack on Ukraine being planned for next year.

Russia was never really going to let Crimea go. While Kiev freed itself from the Russian sphere of influence, the Crimean Parliament opted to organise a referendum on formally becoming part of Russia again. A suspicious 96.6 percent of locals voted ‘yes’ and the international community swiftly denounced the annexation of the territory by Moscow. The ruble soon became the official currency, and the clocks were back on Moscow time. Russia wasn’t messing around, and it was the railways that would complete the operation.

Moscow wanted direct access to Crimea, which was separated from the rest of its territory by the Kerch Strait and could only be reached by ferry. So they built an 18km road and railway bridge: a project bestowed upon Arkadi Rotenberg, Vladimir Putin’s judo partner, for  a mere three billion dollars. The bridge was built sufficiently close to the water to prevent large ships from passing beneath it and accessing the Ukrainian ports of Mariupol and Berdyansk. The Russians wanted to annex the Crimea and damage all of Ukraine in one fell swoop.

A few years later, in 2019, the railway line was inaugurated to much fanfare, with a train leaving Saint Petersburg and reaching Crimea in 16 hours. Since then, two daily trains leave Moscow, while others come from Kazan, Yekaterinburg and Kidlovodsk in the Caucasus. At the same time, railway links with Ukraine were broken off: no train has left for Crimea since 2014. So Moscow succeeded in its mission: the railways have ensured that Crimea can’t easily change allegiances and do without the transport links newly built by the Russians.

At a time when walls are being built along borders all over the world, it seems even the railways – which were historically used to connect nations and help them better understand each other – are now being used as a way to entrench conflict and division too.

Those interested in the intersection of rail travel and international politics should check out the book Géopolitique du Rail by Antoine Pecqueur, who dissects with brio the way the train has influenced borders and zones of influence around the world.