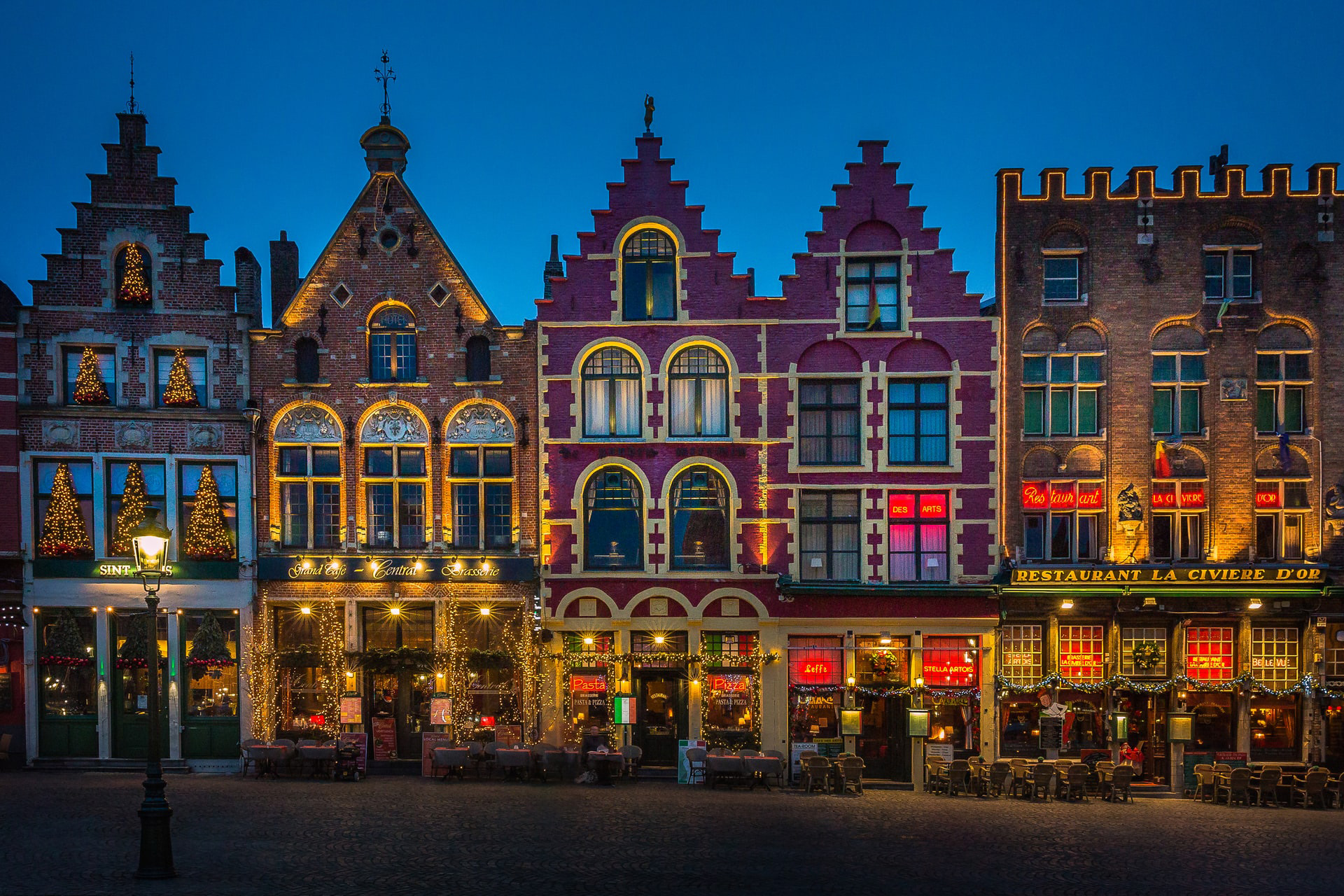 With Christmas now just around the corner, we’re taking the opportunity to recommend some city breaks that feel really right in that weird bit of time in late December and early January when time seems almost to have been suspended. One of those is Bruges. For four centuries the ‘Venice of the North’ has somehow managed to evade the rampant industrialisation that has transformed similar cities in this part of the world. So in this brief guide to the Belgian city, we’ll be properly travelling back in time. Let’s go.

So, why ‘Venice of the North’? The canals of Bruges snake around the city and really do seem to be its lifeblood. There are two great ways to explore them: on foot or by boat (both are pretty magical), and as you wander, you’ll be able to take in magnificent old bridges, hidden churches and squares, and beautiful little gardens. It’s hard to know where to look: at the frankly extravagant buildings that line the canals, or their marvellous reflections in the water.

Once you’ve traipsed along the water, you’ll want to track down some of the city’s most historic architecture. Head to the Markt – or Grand-Place – which has been on the same site since 958AD. The gothic façades of the surrounding buildings are truly beguiling, and you’ll get the best view from the belfry that overlooks the square (it’s only 366 steps to the top). Up there, you’ll find a whopping 47 bells, chiming their distinctive symphony.

For a change of scene, head to the Parc de Béguinage. This place has been here for a long time, too: built in 1245, it was once home to the Beguines – laywomen who took a vow of celibacy and lived here communally. Today it has been turned into a nunnery, and anyone can pop along for a visit.

Next over to Notre-Dame: a monument worth visiting both for its striking architecture and a;l the incredible artistic masterpieces it holds. The most impressive of them all is no doubt the white marble sculpture Virgin and Child by Michaelangelo. For a little more culture, try the Musée Groeninge: an art haven filled with the very best of Flemish art: van Eyck, Gerard David, Hieronymus Bosch. It most certainly gives the impression that Bruges was one of Europe’s foremost cultural capitals throughout the fifteenth century and beyond.

Before we suggest a few amazing places to eat, we recommend a trip to the Frietmuseum (the ‘fries’ museum. We all know frites are an institution in Belgium, and this place will tell you everything you need to know about them. The exhibits start with the origins of the potato in Peru to the development of deep frying in Belgium. No doubt it’ll also help you work up an appetite, which is pretty handy, as it’s remarkably easy to eat well in this city…

Start (yes, start) with some chocolate. There are a good 50 or so chocolatiers in Bruges, but we’d go for The Chocolate Line, where Dominique Persoone will impress you with his original, often quite unusual creations (olive oil chocolates, anyone?) Before tucking into something more substantial, grab a glass of something natural at Cuvee or Jus. Come dinner time, our absolute favourite is Sans Cravate: a Michelin-starred restaurant whose wines are just as impressive as the (very hearty) meals. Another, no less delicious option is Bruut, whose brugeois bistro cuisine will keep you more than satisfied as you catch the train home.

This idyllic destination could make a great next trip for you and your loved one: Prague. Such is this city’s beauty that you feel almost like you’ve been whisked off to another planet.