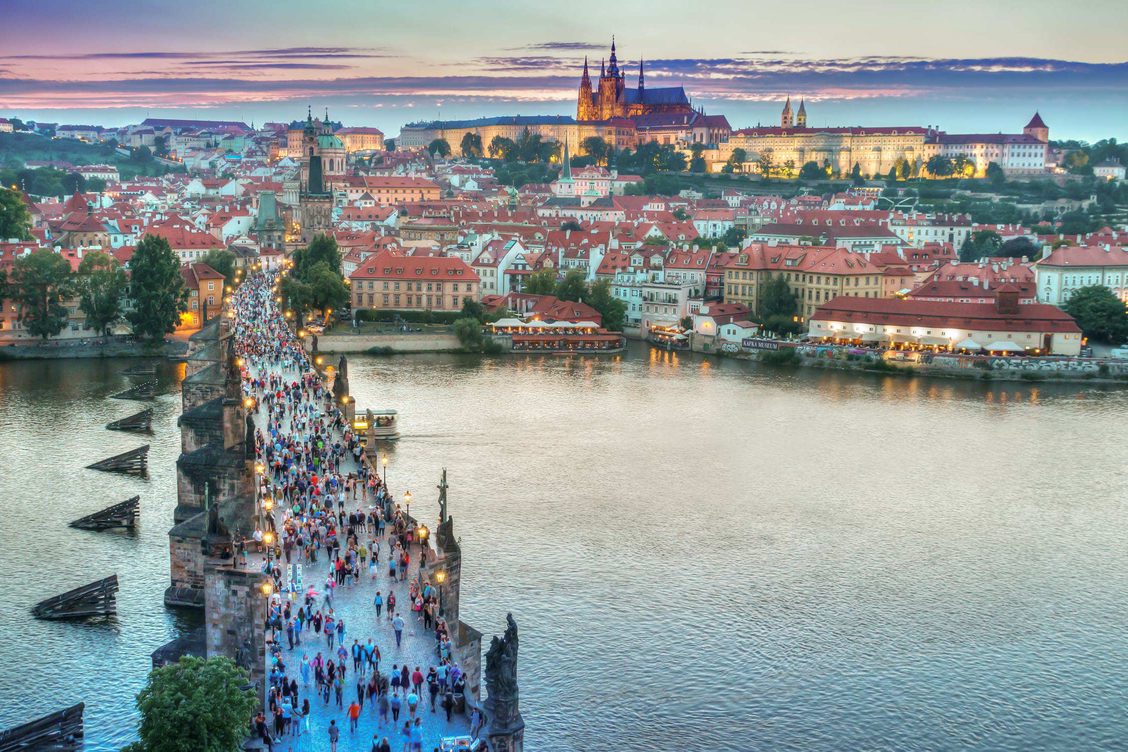 When you think of classic romantic city breaks, you might reach immediately for Venice, or Rome, but this week we’re spotlighting another idyllic destination that could make a great next trip for you and your loved one: Prague. Such is this city’s beauty that you feel almost like you’ve been whisked off to another planet.

Few cities, in fact, lend themselves to the simple art of strolling around aimlessly than Prague. There’s something rather magical about its atmosphere, and that’s perhaps not surprising considering this was the legendary land of alchemists during the sixteenth century. Wherever you are in the centre, you can’t help but marvel at its architecture.

To get a decent feel for the place, start your day at sunrise on the mythical Charles Bridge. At this time of day, the light lends a poetic quality to the pedestrian-only structure, something not even the hordes of visitors that congregate here can detract from. Late riser? It’s fair to say it’s worth seeing the bridge when it’s lit up at night, too.

Next, continue your architectural tour with a trip to the royal castle, in the Hradčany area, which is made up of a labyrinth of picturesque alleyways and passages. Don’t miss the idyllic castle gardens: a haven of greenery smack bang in the city centre. From there, you’ll want to hit up the Saint Wenceslas vineyard, which was planted in AD 909.

Prague is a city that’s made for a wander, like we say, and as you mooch around town you’ll no doubt spot a few of the hilarious sculptures by David Černy, known for his edgy brand of surrealism. Whether it’s the babies climbing the TV tower or the upturned horse on Lucerna passage, you certainly won’t forget his stuff in a hurry.

And if you aren’t exhausted after taking in all that glorious art and architecture? You should definitely check out the ‘dancing house’ by architect Frank Gehry, who was also behind the Musée Guggenheim in Bilbao and the Fondation Luma in Arles. It’s no doubt one of his most accomplished works, with its two towers conjuring up the curves of an entwined couple, perhaps mid-dance. Truly unmissable.

If you get a case of the hunger pangs, Prague can certainly deliver. Train aficionados will want to make a beeline straight for Vytopna. This restaurant will please adults and kids alike: the food is great, and the place is criss-crossed with a network of small electric trains that whizz from one room to the next. Like something straight out of a movie, the carriages will take the drinks directly to your table.

And there’s all manner of other great restaurants you should hit up during your stay. Want to try some traditional Czech cuisine? Head to Zvonice, which is tucked inside a bell tower. To mix things up a bit, why not try La Finestra in Cucina, an Italian restaurant beloved by locals. Just after a drink? Beer lovers will want to try Craft Beer Spot, while natural wine fans should go to Autentista. Fajnsmekr, meanwhile, is a great place to pick up a local bottle or two.

As for when you might like to make the trip, the festive period is especially joyous here in Prague. The atmosphere at the city’s main Christmas market, on Old Town Square, really is unbeatable. But another great time to go would be for Prague Pride, which will take place in mid-August next year. Set up in 2011, it’s one of Europe’s biggest (and best) Pride celebrations.