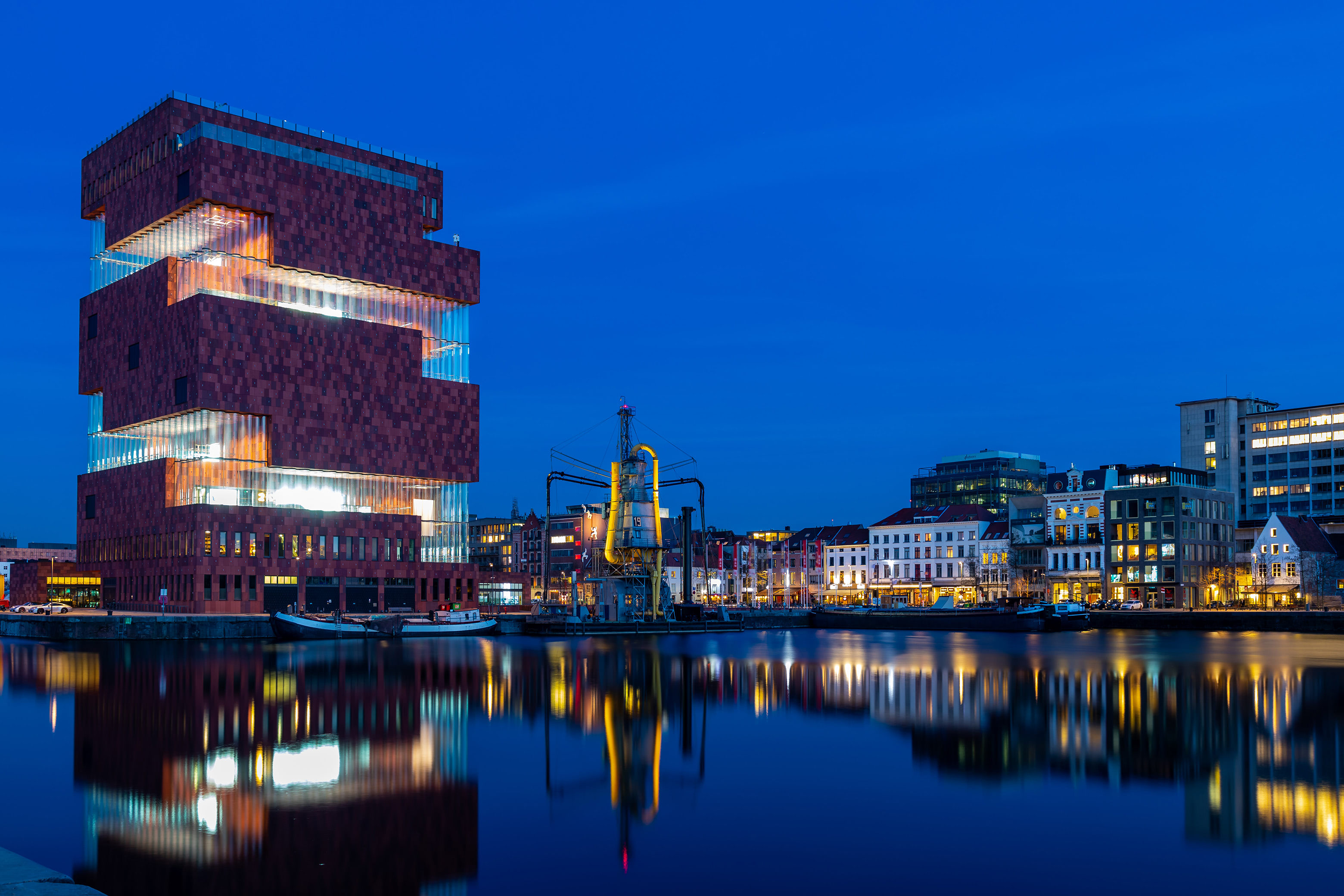 Having already whisked you off to Brussels or to Bruges in previous editions of Midnight Weekly, this week we’ll be heading to another Belgian city that’s attracted exceptional craftspeople, architects, writers and painters over the years. Antwerp is one of those places where you can’t help but feel inspired as you wander its beautiful, historic streets.

You’ll no doubt kick off your trip at Antwerpen-Centraal, which happens to be one of Belgium’s most majestic sights (and one of the world’s most elegant train stations). The façades on Queen Astrid Square are just as dazzling as the interior: it’s so striking you’ll feel like you’re looking at some sort of place of worship. After this initial encounter with the city, you should head to the Grote Markt – main square – to help orient yourself. You’ll be blown away by the Renaissance Guilds and Corporations building that surrounds it.

Just a few metres from there, you’ll find another one of the city’s icons, the Onze-Lieve-Vrouwekathedraal. This epic building took no less than two centuries to complete – in 1521 – and it’s had its fair share of drama in the years since: fires, pillages, revolutions and all. However, each time it was restored with ever-greater embellishments. Don’t miss the ringing of its 47 bells.

In a very different vein, try hitting up the Zurenborg neighbourhood, which is filled with beautiful art nouveau villas. It wasn’t supposed to look that way: at the end of the nineteenth century, local authorities planned to build an industrial zone based around a huge freight railway station. But as the city’s population grew, the plans changed and they built residential accommodation instead. The diversity of the architecture really is quite something.

There are remarkable examples of basically every architectural style in this city, and when it comes to contemporary buildings, Museum aan de Stroom must be one of Antwerp’s most beautiful. Tucked in the heart of the former port neighbourhood, the 60-metre-high, Willem Jan Neutelings-designed museum has a slightly unsettling air about it, too. Don’t miss the panoramic views on its roof terrace.

Antwerp is a city in love with art. This, after all, is the city where Rubens had his atelier and house (which you still visit today). Another key cultural spot is the Royal Museum of Fine Arts, which through new exhibition Le Réel Fantastique aims to help visitors get to know modern Belgian art, from Henry Leys to Rik Wouters to René Magritte. You’ll also want to visit MoMu, a majestic fashion museum with a whopping 33,000 pieces in its collection (note, however, that it is undergoing renovations until September). And then there’s the Nationalestraat, the street where MoMu has decorated 16 utility boxes with emblematic figures from its collection, including renowned personalities like Martin Margiela or Dries Van Noten. Find the full itinerary here.

The also brims with master artisans, notably including some of the world’s finest chocolatiers. Try The Chocolate Line, which showcases the daring creations of Dominique Persoone; DelRey, which is conveniently close to the train station; or Gunther Watte, if you want to sample the city’s most upmarket sweets.

And as for a drink or two? Beer lovers will want to head to Paloma, which does a good job of showcasing the best Belgian brews, while natural wine fans can choose between the super-stylish Osaka and Titulus, which pairs drinks with excellent small plates.

When it comes to sit-down meals, we’d recommend Rush Rush for breakfast. Veranda, in the former slaughterhouse district, offers a pretty unique seasonal menu both at lunch and dinner, with excellent service to boot. Victor, meanwhile, places a similar focus on sustainable sourcing in its thoroughly creative dishes, and The Jane has received two Michelin stars for its blowout gastronomic offering.