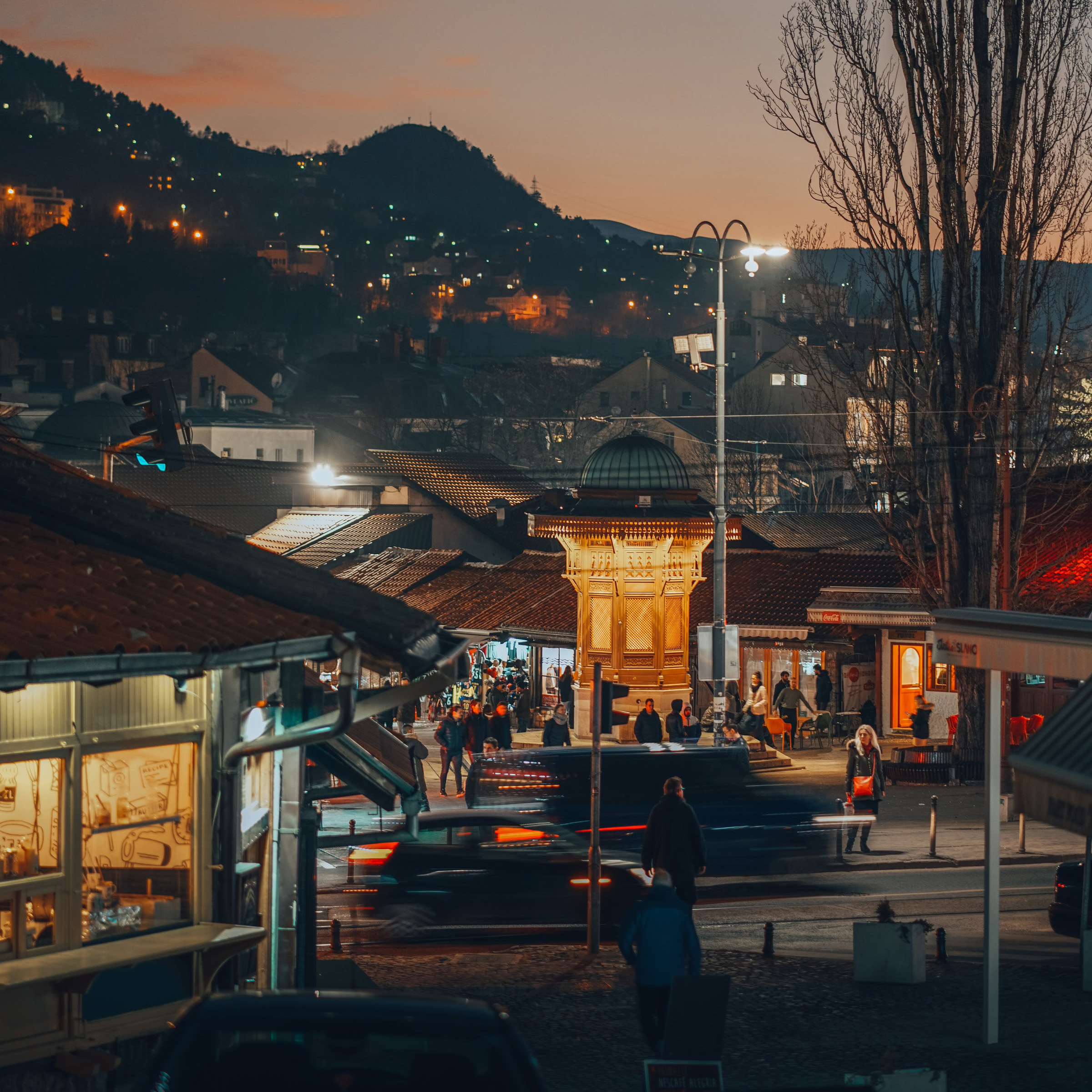 The rebirth of a city

This week, we’re going a little off the beaten track. Having sauntered through industrial Manchester, cosmopolitan Warsaw and the eternally beautiful Dubrovnik, now we’re heading for Sarajevo. Though its name may be associated with war and violence, the capital of Bosnia-Herzegovina has undergone a remarkable renaissance. This brilliantly friendly city is a mish-mash of different cultures with unlikely secrets hidden around every corner.

Our walk will start in Sarajevo’s old town, which is known as Baščaršija. But let’s be clear: this isn’t a giant city centre piled high with palaces and cathedrals. Sarajevo is in fact a rather small place, with only 300,000 inhabitants and nothing ever very far away. As for its old centre, this area looks like nowhere else. The Ottoman influence is clear: here you’ll walk among countless wooden stalls covered with Turkish cafetieres, jewellery and other traditional objects, splendid mosques and small cafés that make the ideal spot for a traditional breakfast.

Now, for a change of scene, head to the Contemporary Art Gallery Brodac. Founded by the young artist Mak Hubjer, this alternative art institution is entirely dedicated to art that defines itself as politically edgy. Here you’ll be able to check out the cream of Bosnia-Herzegovina’s emerging art scene, always at the vanguard of innovation (and insolence). One part of the building is also given over to the way in which the country’s youth have fought back against authoritarianism. It’s a place like no other, and is totally unmissable if you‘re into your contemporary art.

Despite its size, the city still attracts enough tourists for it to be necessary to avoid the tackier sort of restaurants that line the major drags. For lunch, try Bistro Sami. Why? Because this super-traditional local restaurant will serve you the very best of Bosnian food, spanning all manner of meat, potato and dumpling dishes. The owner is thoroughly charming, and the restaurant makes the perfect place to familiarise yourself with the local concept of merak, which roughly translates as the ‘pleasure to be found in small things’.

After lunch, you’ll want to discover the Tunel spasa, the tunnel of hope. Dug by the city’s inhabitants to travel from Sarajevo to the United Nations airport, all while avoid bombings and other attacks, today it makes one of the best ways to immerse yourself in the bleak (and not all that distant) history of the city. In the same spirit, if you’ve got your kids with you, definitely check out the Safet Zajko Centar. This military complex-turned-leisure centre offers dozens of interesting activities. It’s one of numerous examples of the innovative way in which the people of Bosnia-Herzegovina have reclaimed and reappropriated the scars of war.

Finish off your day by taking a breather at Vrelo Bosne. Just beyond the city centre, this place is more of a domesticated forest than a park. Whether on foot, by bike or horse-drawn carriage, it makes an almost unreal setting for a stroll, not far removed from that of a fairy tale. On your way back, drop by the Festina Lente Bridge, an ultra-modern, hard-to-describe bridge which leads to the city’s Academy of Fine Arts.

For dinner, settle in at the astonishing Mala Kuhinja. The decor may be nothing special, but the food really is. The chef serves exquisite fusion plates blending Asian flavours with those of traditional Balkan cuisine. It’s a simple premise, but he’s probably the only person in the world to have done so. If you fancy a glass of something local, we’d recommend Vinoteka. Here you can try more than 100 bottles from across Bosnia, Croatia and Slovenia. The venue’s two rooms have two very different vibes, but you’ll go away impressed by either.

The Florence of the Elbe. That’s the rather flattering nickname given to this city, so ravaged by human folly throughout its history. First it was largely destroyed by a fire in 1685, before being rebuilt for the first time and receiving its distinctive baroque look.