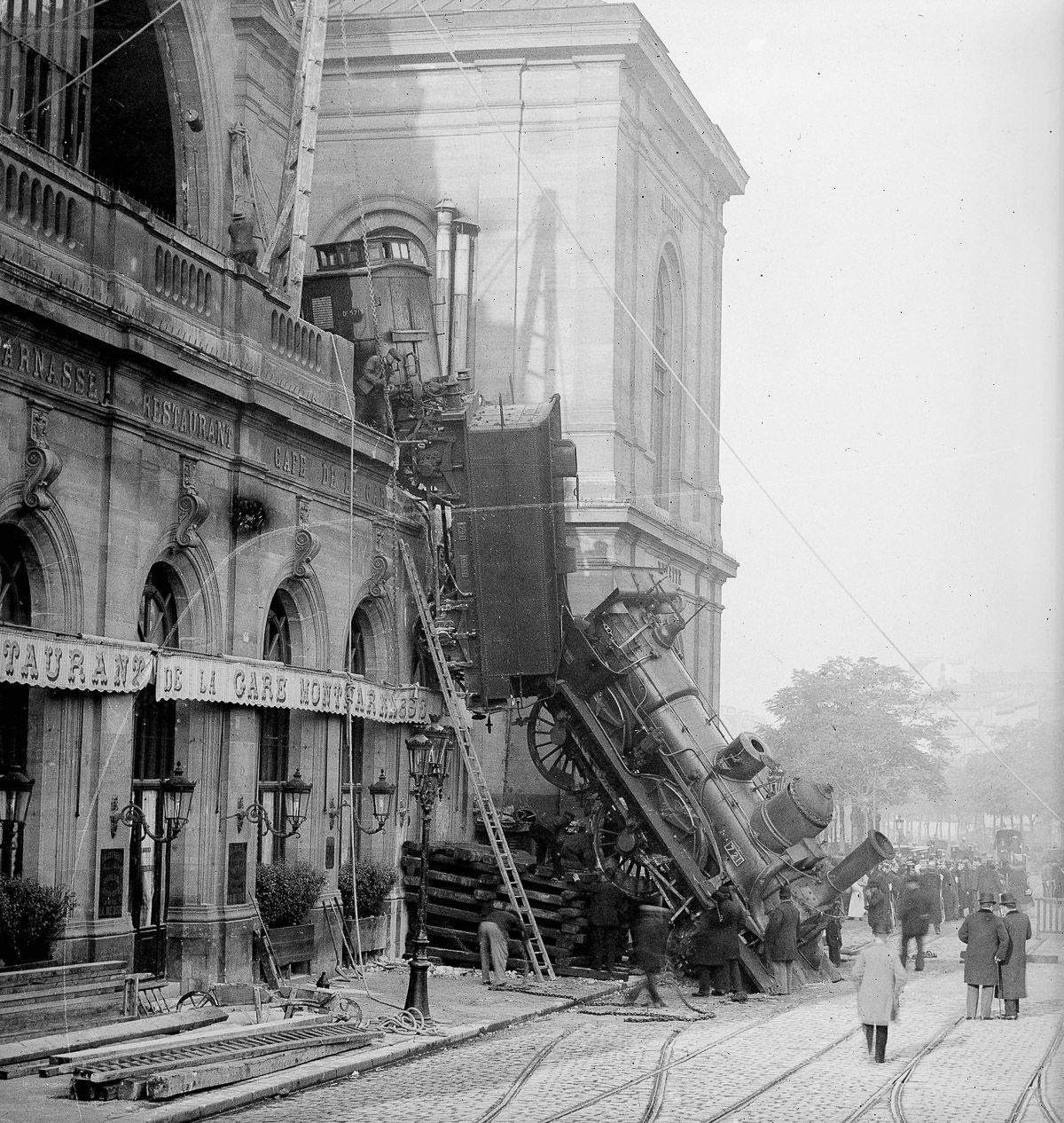 The railway disaster at the Gare Montparnasse

What happens when the brakes stop working

People often talk of life as a series of chance encounters, defined largely by luck, but it could also be seen as a sequence of accidents. Small ones that graze knees and cut fingers; big ones that break your heart; monumental ones that hit the frontpages. It’s one of the latter we’ll be talking about in today’s edition of Midnight Weekly: the : railway accident of the Gare Montparnasse in Paris. Immortalised by the early photographers, it’s still today one of the most famous railway accidents in history.

October 22 1895. The number 56 express train leaves Granville, in the region of La Manche, at 8.45am in the morning. At 15.55 on the dot, it arrives at platform six at the Gare Montparnasse, its terminus. But there’s a problem on board. Having wanted to make up for the delay that they blamed on the Versailles-Chantier station, mechanic Guillaume Pellerin and operator Victor Garnier realised that their air brake was defective. They decide to reverse the pressure and whistle so the drivers would apply the emergency brakes.

But nothing happened. The locomotive, the coal-car, two baggage cars and ten passenger carriages including one lounge car and a final baggage car plough in at a speed of 40km/hour. The wooden buffer, the concrete embankment and the façade of the station were seriously ruined by the collision. The train then destroyed the balcony of the small terrace giving over the Place de Rennes and ended up on a tram station.

As spectacular as it sounds, the accident of the Gare Montparnasse only had one victim: Marie-Augustine Aguillard, a newspaper seller who left behind two children, aged five and nine. Guillaume Pellerin and Victor Garnier were thrown out of the train during the initial collision and the passengers only received light injuries. The material damage, on the other hand, was massive.

But the most fascinating thing about this story relates to its media coverage. Within a few minutes, thousands of onlookers flocked to the station to see the impact of the accident for themselves. There were so many, in fact, that the authorities sent out 120 municipal guards (20 on horse and 100 on foot) to control the crowds. Some people even started buying tickets for trains they weren’t taking so they could step inside the station and explore the wreckage inside. Then the journalists came swooping in, with the story making headlines as far away as the United States. In France the accident was covered by all of the press, which went as far as making light of what had happened. The story’s developed were released in dribs and drabs like some sort of nineteenth-century spin on reality TV.

The engineers charged with extracting the locomotive embedded in the ground and the coal-car suspended in mid-air faced a huge technical challenge. It suffices to look at the images of the catastrophe to understand how they must have felt. They started by propping up the coal-car securely so it wouldn’t fall and injure workers or passersby. The locomotive, which weighed 50 or so tonnes and was dangerously wobbly, posed a far more daunting challenge.

They ended up using a structure of planks, resembling a staircase, to pull the locomotive out (with the strength of a whopping 50 men). No luck. Then they tried 15 or so horses. Again, no luck. They ended up creating a system involving a large winch and various powerful jacks. The coal car was then moved to the station and put back on the tracks. They’d done it.

A long inquiry followed, finding that the air brake had malfunctioned (without much more explanation than that). Many tried to point the figure at Guillaume Pellerin and Victor Garnier.  The former may have been considered an excellent employee – and had the excuse of having been at work for six hours and 45 minutes non-stop before the accident – but was handed a two-month suspended prison sentence and a 50 franc fine for homicide and injuries caused by recklessness. One of the drivers in charge, Albert Mariette, was also fined 25 francs. And the Compagnie des Chemins de Fer de l’Ouest recognised its civil responsibility in the death of Marie-Augustine Aguillard. It offered compensation to her partner, paid for the education of their children and promised them jobs within the company.

The broader lesson of the railway accident of the Gare Montparnasse is that, whether you’re talking about a fall from a horse or an unexpected political development, this sort of event is always down to many things. But above all, it tells us that whether or not certain people repent for their wrongs – or how many people are tasked with sorting out the damage – things are never really the same again after an accident.

Poetry’s intimate relationship with the railways in fact goes back nearly two centuries, trains acting as muses to the world’s writers.