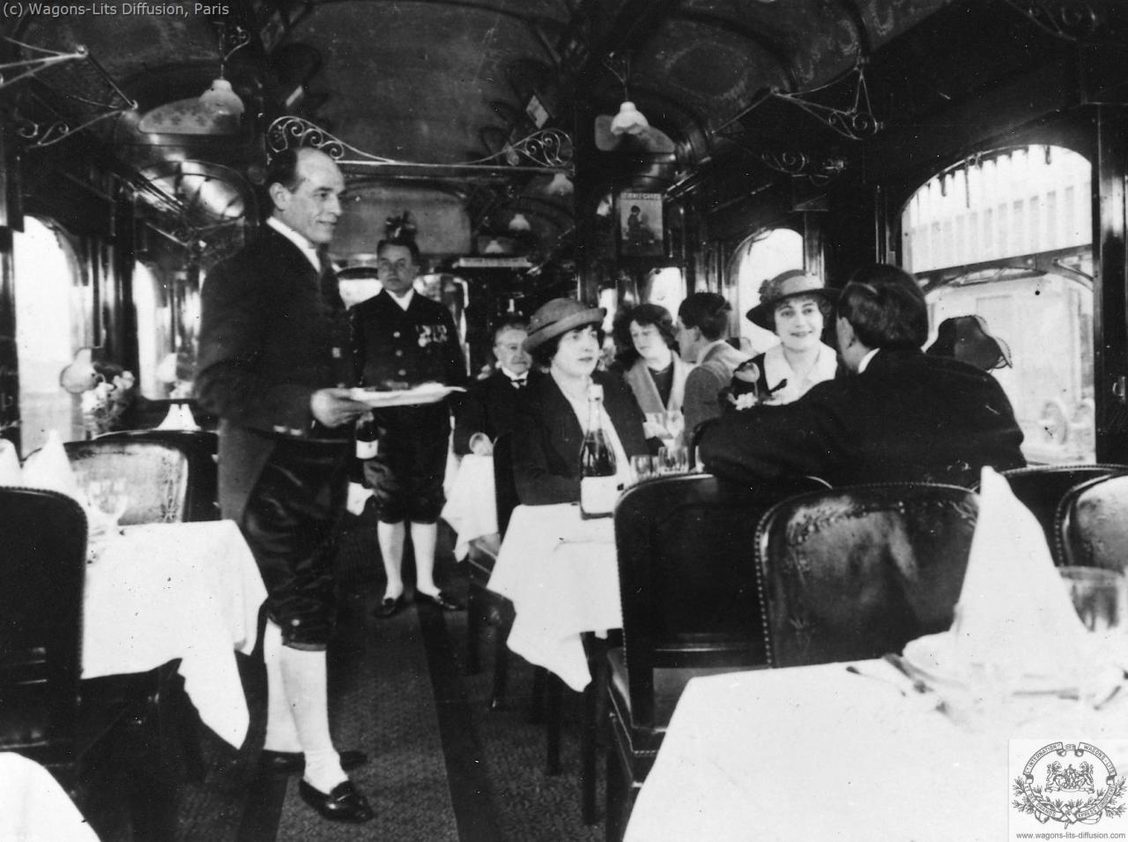 A decent meal, and the conviviality it can provide, is one of our musts when it comes to preparing the trains that will allow our passengers to travel all over Europe from our Paris HQ. What can you expect? Seasonal products sourced with care, house cocktails, artisanal beers and natural wine, all served at your table, at the bar or in your compartment. For us, this sort of service should help you feel like your travels have begun as soon as you’ve boarded our trains.

It’s easy to forget that feeding yourself on a train hasn’t always consisted of chowing down a bland chicken mayo wrap, stuffed with preservatives, as they are often put together weeks before you tear apart the packaging. For a long time, in fact, on-board restaurants played a big part in the mythology around the sleeper-train journey, no doubt thanks largely to the gastronomic extravagance of luxury services like the Train Bleu, Orient-Express and Trans-Siberian Express. Take this description of the restaurant car on the Orient-Express written by Adolphe Opper de Blowitz, the Times’ correspondent in Paris, at the end of the nineteenth century:

‘In front of the two carriages and the baggage car, the curtains coquettishly pulled back, the wagon-restaurant was a truly dazzling thing to behold. The large lamps created a festival atmosphere. All the restaurant tables, lined up two by two, facing one another; those with four covers on the right, those with two on the left, all spread over seven rows and sumptuously laid. The bleached whiteness of the tablecloths and meticulously folded serviettes; the glistening of crystals; the ruby of the red wine; the topaz of the white wine; the pure crystal colour of the water-filled carafes, and the silvery champagne bottle tops all transmit an an astonishing aura on the crowd both inside and outside the carriage. It all made for a living, breathing refutation of the sadness and regret evident in the physiognomy of those who exited the car.’

That’s what it felt like on board a train at the time, and the food made the journeys feel almost like a travelling banquet. Take the lunch menu on April 8, 1907: scrambled eggs with truffle, cutlets of veal with pureed potatoes and aspic de foie gras à la Lucullus. The chefs stopped at nothing to provide the best experience possible. Even the most refined of tastes could hardly turn their nose up at roast goose, praline parfait, a cheese platter, coffee and a dessert disguised as a colourful bouquet. Frugality wasn’t in fashion, by any means.

All of that, on a train at the start of the twentieth century – almost hard to believe, right? A great deal of the food was prepared by an impressive team of chefs, conceived in a microscopic enclave in the wagon-restaurant kitchen. No space was wasted; everything thought through to make sure facilities and preparation space were optimal. The dishes themselves were put together depending on what was available nearby the various train stations.

If the chef and his team didn’t have a particular ingredient on board, they obviously weren’t able to simply pick up a mobile phone to make an order just like that. But they had a clever alternative: the chef would write down whatever he needed on a piece of paper, before slipping the missive in a small hole he’d made in a potato. Then, he’d throw it out the window to a worker from the Compagnie Internationale des Wagons-Lits (CWIL) as the train passed through a station (where they wouldn’t even necessarily stop). At the next stop, they would meet the delivery. Simple.

There was something quite charming about this peculiar food delivery system, but while CWIL continued to develop new rail lines at the start of the previous century, the sheer volume of meal orders necessitated a full-blown logistics system. And so, just before the First World War, it set up its very first centralised kitchen, on the Place des Vosges in Paris, where a number of ingredients were prepared before the meals were put together on board.

Several other central kitchens, as well as general warehouses, located at various CWIL terminuses, completed a vast network of external sites that would help satisfy the stomachs of countless travellers. The biggest of the lot was the one at Saint-Ouen, where alongside the central kitchen, the firm stored as many as 200,000 bottles of wine and created a vast washing and utensil storehouse. And they really needed all that space: in 1948, CWIL was buying ten tonnes of veg and 800kg of fruit per day, as well as ten tonnes of meat every week.

Without quite going to these extremes (necessary in such a different era), we’re convinced that if we are to really reinvent the wheel when it comes to night trains, we’ve got to think hard about the food. No doubt because when you’re travelling by sleeper, time feels almost like it’s been suspended, and that makes it an ideal time to prioritise comfort and conviviality above all else. We can’t wait to reveal what our restaurant car has in store for Midnight Trains travellers in the very near future.