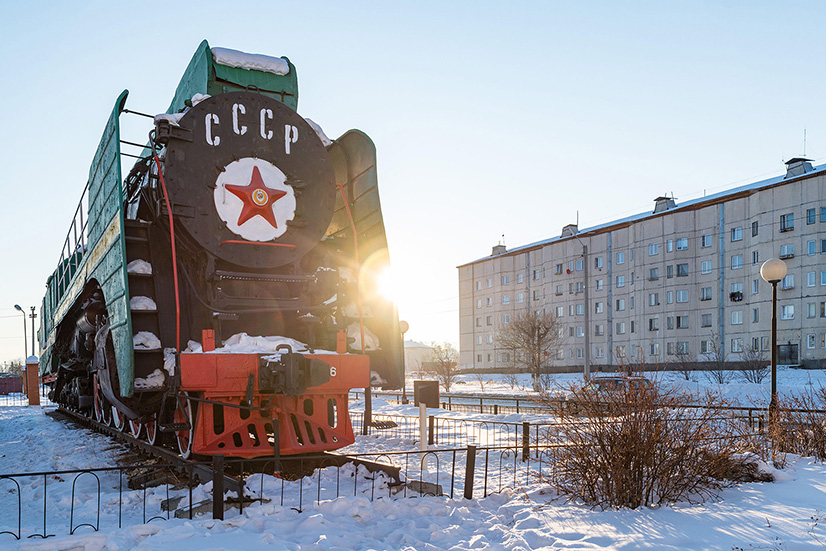 The Baikal-Amur Mainline, a railway made in the Gulag

The soil has been frozen over for months and your pickaxe won’t break into it. Each time you raise your tool above your head, you lose a little more energy. You’re on the brink of giving up at any moment. You can’t feel your fingers nor your toes any more, and the glacial wind sending a chill through your bathing suit-style outfit. It’s because you’re a prisoner from the Gulag that the Soviet regime has made you build a section of the Baikal-Amur Mainline, from the city of Tayshet to the Sea of Japan, in the country’s far East.

It’s 1932 and the Soviet government has ordered the construction of this gigantic line to create an alternative to one part of the Trans-Siberian. The latter is considered too close to the Chinese-Japanese border by the powers that be in the USSR. The line known as the BAM would be built further north to offer a safer route between the east and west of the country. Without it, an invasion would be able to totally cut off certain cities in the western part of the area controlled by Moscow and reduce access to the Pacific Ocean.

But this required huge financial, logistical and human resource, far more than the communist leaders had initially imagined (and much greater than the amount they had made available to make this project happen). They needed 10,000 road workers and 2,500 drillers – a workforce that simply wasn’t available to them. A workforce who was willing, at least. So prisoners of the Gulag – that sadly infamous prison system – who were enlisted. The figures aren’t exactly agreed upon, but at least 30,000 were mobilised starting in 1933.

And the working conditions were far from enviable. During the winter period, the cold proved a real mortal danger, especially because prisoners often slept without proper shelters during the early years of construction. As for their food ration, they were limited to 400g of bread a day. Which wasn’t much in a climate where temperatures sometimes dropped to -50C.

Several of them died in the process: from the cold, exhaustion, perhaps even despair and desperation. New prisoners were sent to replace them to build this line, whose aim (beyond those security concerns) was to open up the territories of the Far East and facilitate the transport of its resources. According to the Russian financial newspaper Vedomosti, more than 40,000 men died while building the Baikal-Amur Mainline.

This immense human sacrifice didn’t suffice to complete the task in the timeframe imagined by the leaders of the USSR. The money evaporated, and the years flew by. So much so, the project was paused after the start of World War II, before restarting slowly after the end of the conflict. However, the death of Joseph Stalin in 1953 meant the project was once again forgotten about. It took a determined Leonid Brezhnev to bring the BAM back to life in 1974. But this time, rather than prisoners, he called upon the komsomol, or the organisation of young communists.

Propaganda and decent salaries (for the time and place) got young people from across the USSR interested. There were so many of them (both boys and girls), in fact, that many of those working on the project ended up coupling up and small cities began to crop up along the line. Certain artists were even sent on tour to entertain the workers of the BAM. But the scope of the project was so immense – today the line is more than 4,000 kilometres long – that it represented an immense challenge, one that came at a huge cost. The work continued, though, and new sections were added at irregular intervals. The death of Brezhnev in 1982, followed by the collapse of the USSR, also delayed its completion. The works got under way again in the 2000s, and the Severomorsk tunnel (which was more than 15 kilometres long) was completed in 2003.

The most astonishing thing in the tale of the Baikal-Amur Mainline, which takes its name from those of a famous Russian lake and river, is that today, once again, prisoners have been enlisted to work on the project once again. In June 2021, the official Russian news agency Ria Novosti announced the signing of an ‘agreement of intention’ between the prison services and a building firm ‘to use the inmate workforce to create a site that functions like a correctional facility’. In other words, prisoners were to be sent to Siberia to modernise the Baikal-Amur Mainline, notably by adding a new branch. So while Russia may not be the USSR, the chilling start to this article isn’t so far removed from the reality of 2022.