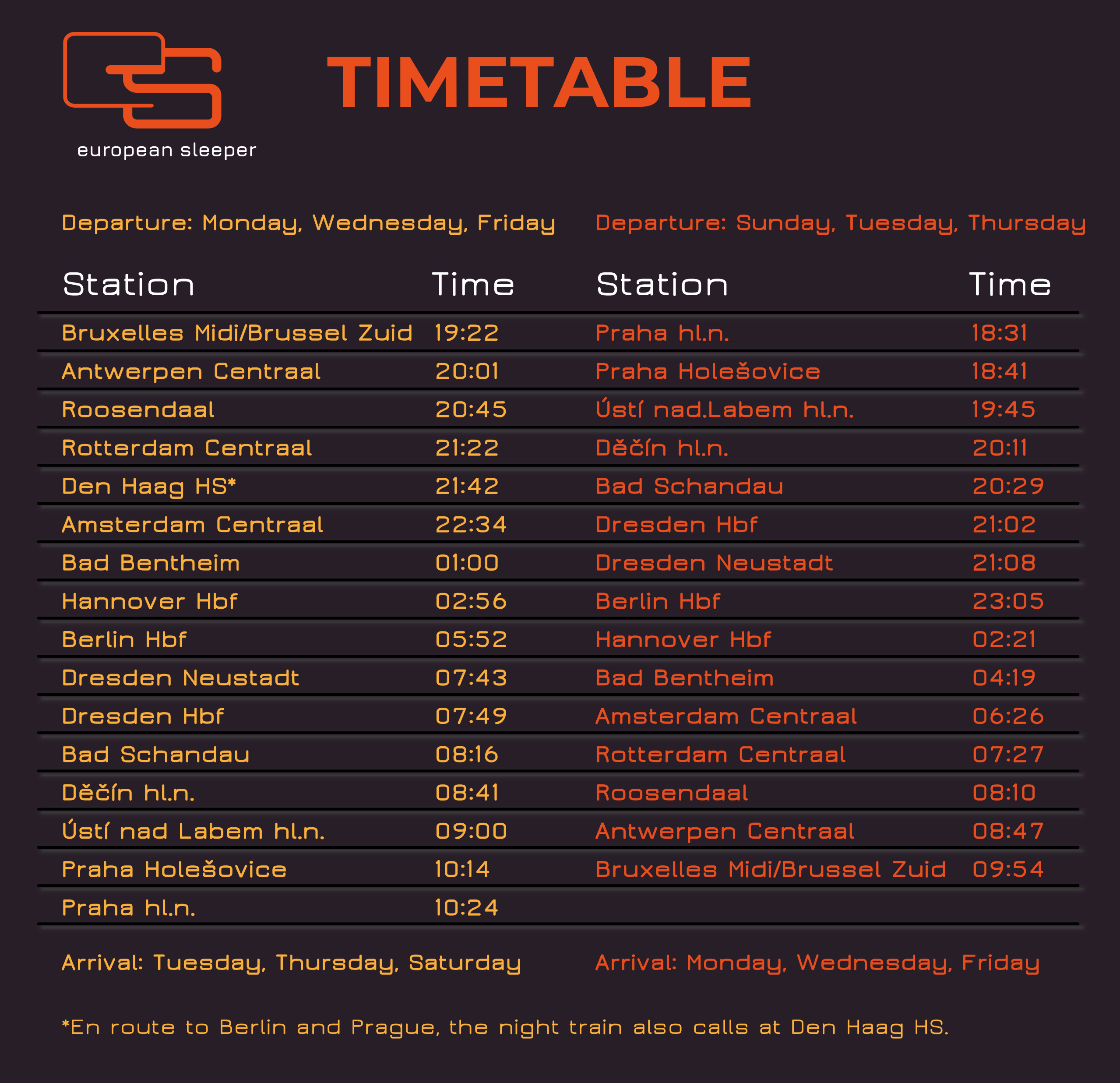 Now for the final instalment of our series on the new actors shaking up the Euro rail industry. Following Railcoop, Le Train and Kevin Speed, this week we’ll be turning our attention towards European Sleeper. Like Midnight Trains, but with an idea very different from our ‘hotels on rails’, this Dutch-Belgian business is among those who’ve launched into the industry since it was opened up to private firms. For this fourth episode, we’ll be focusing on this project that aims to create a new night-train network linking several northern and central European countries, by joining up several existing services.

As we well know, the idea of updating sleeper trains for the present days is a pretty seductive one. Two of those most sold on the idea are Elmer van Buuren and Chris Engelsman, two Belgian and Dutch entrepreneurs. The pair of them decided in 2021 to combine their two businesses – European Sleeper and Moonlight Express – into European Sleeper.

For they essentially had the same objective: to create a new sleeper network linking, initially, the capitals of Belgium, the Netherlands, Germany and the Czech Republic. Warsaw, the Polish capital, could be on the way too. Other, smaller cities like Ostend could also be included on some of their lines.

The European Sleeper concept relies on a simple idea: there’s a lot of pent-up demand for night journeys between major cities that are popular with both a European and non-European visitor market. Elmer van Buuren and Chris Engelsman aimed to have their first journey up and running by April 2022. That has been pushed back slightly, it could now happen sometime in summer. But despite the imminence of that date, there is little concrete information about the actual European Sleeper services.

The financial situation of European Sleeper remains rather confidential. The business did, however, make it public that it needed 500,000 euros to bring its project to fruition. That sum was raised in a mere 15 minute thanks to a crowdfunding campaign in May 2021 that drew investments from 350 different parties. If that seems relatively low, compared with the figures cited by Railcoop, Kevin Speed and Le Train, that’s because the business model of European Sleeper is rather unique.

On a technical level, the business sets itself apart from other projects we’ve talked about in this column. Rather than create a typical railway transport business, the two leaders want to draw on the network of preexisting private businesses. That also means it won’t have its own official railway operator licence. So the way they’ve chosen to do things is both quicker and simpler than usual.

It does, however, mean the Dutch-Belgian startup relies on a network of partners who must have the necessary permissions for such a project in each country concerned. You then have to facilitate them working together and making their services uniform to help create a network like the one the two entrepreneurs are dreaming of. Add to that, also, the need to work with the Belgian, Dutch, German and Czech rail authorities so you can acquire those all-important timetable slots we’ve explained in rather a lot of depth already.

This approach, which relies on buying both second-hand trains and using existing services, could allow it to launch its first night train well before the late-2022/2023 dates envisaged by its rivals. Like other companies mentioned in this series, we’re very on board with the company’s idea and wish them all the success in the world. Because here at Midnight Trains, we believe the railway sector is a market very much open to creativity and originality. The freer and more diverse the market is, the better the railways become.

The actors shaking up the Euro rail industry - Episode 3

Like Midnight Trains, but with ideas very different to our ‘hotels on rails’, this business is among those that set out to conquer the railways since they were privatised here in France. In this third part, we’ll be focusing on Speed’s plans for super-regular high-speed services between Paris and the surrounding region.