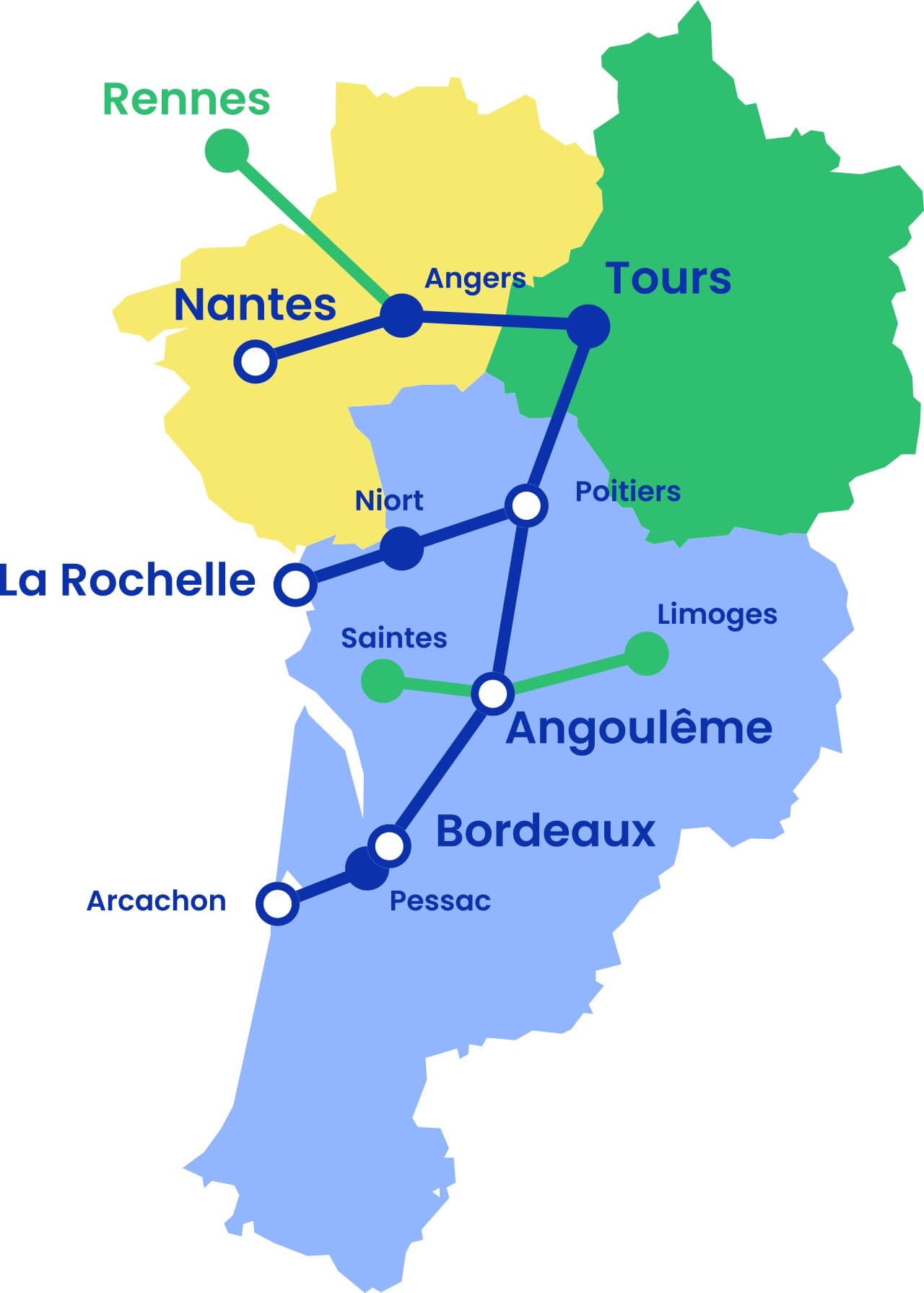 Having told you all about Railcoop last week, our four-part series on the new actors shaking up the Euro rail industry this week moves onto the simply named Le Train. Like Midnight Trains, but with ideas slightly removed from our ‘hotels on rails’, these operators are aiming to conquer the railways in the near future. In this second episode, we’ll be singing the praises of a business that aims to bring high-speed travel to the most poorly  connected of France’s regions.

It started out with frustration. Tony Bonifaci, a Charentais industrialist was disappointed that despite the extension of the high-speed Sud Europe Atlantique line, the number of Trains à Grande Vitesse (TGV) serving the West of France were still too few for its inhabitants to really make the most of them. Meeting train engineering expert Alain Getraud in 2019 and the privatisation of the French rail industry transformed this frustration into a very concrete project. By the end of 2022 or the start of 2023, the two men want to operate their own high-speed trains in Nouvelle-Aquitaine, mostly between Arcachon, Bordeaux, Angoulême and Poitiers, with extensions to Nantes and Rennes on the weekend.

The aim is clear. The founders of Le Train aren’t prioritising Paris connections, but wish instead to focus on inter- and intra-regional links, all too often neglected by SNCF.Le Train aims to carry a total of three million passengers a year. But above all, they want their services to be affordable, making it a whole lot easier for French people to travel between the country’s so-called secondary towns and cities. That means high prices of most high-speed services are out of the question. Le Train instead aims to offer ‘consistent and competitive’ prices between 20 and 30 euros.

A project of this scale obviously comes at quite a cost. On top of the funds required to launch the venture, the Le Train team estimates that 100 millions euros (65 million in equity, the rest borrowed) will be required. One bank has already lent them several million, but a huge fundraising drive will have to top that up significantly in order to secure the business’s finances over the coming months.

Another recurring problem for new rail businesses relates to the trains themselves. Le Train says it will buy 10 used trains capable of holding 350 people but hasn’t yet stated which company it will buy them. And it also hasn’t said whether any renovation works will need to be completed, either.

Le Train is also engaged in complex negotiations with rail authorities and SNCF. Although recruitment of drivers and other staff has already started, the railway operating licence and safety certificate must still be acquired before it starts running its services. These obstacles haven’t prevented Le Train from starting to reserve timetable slots from June 2022 and the first tickets are set to be available in September.

While the two projects may differ, the most problematic obstacles are similar for Railcoop, Le Train and all other new rail operators. But in the same way that we hope that Railcoop can link up Bordeaux and Lyon, we evidently  support the idea of new high-speed connections between Arcachon, Bordeaux, Angoulême and Poitiers. Because we sincerely believe that, on the rails, there’s enough room for all good ideas.