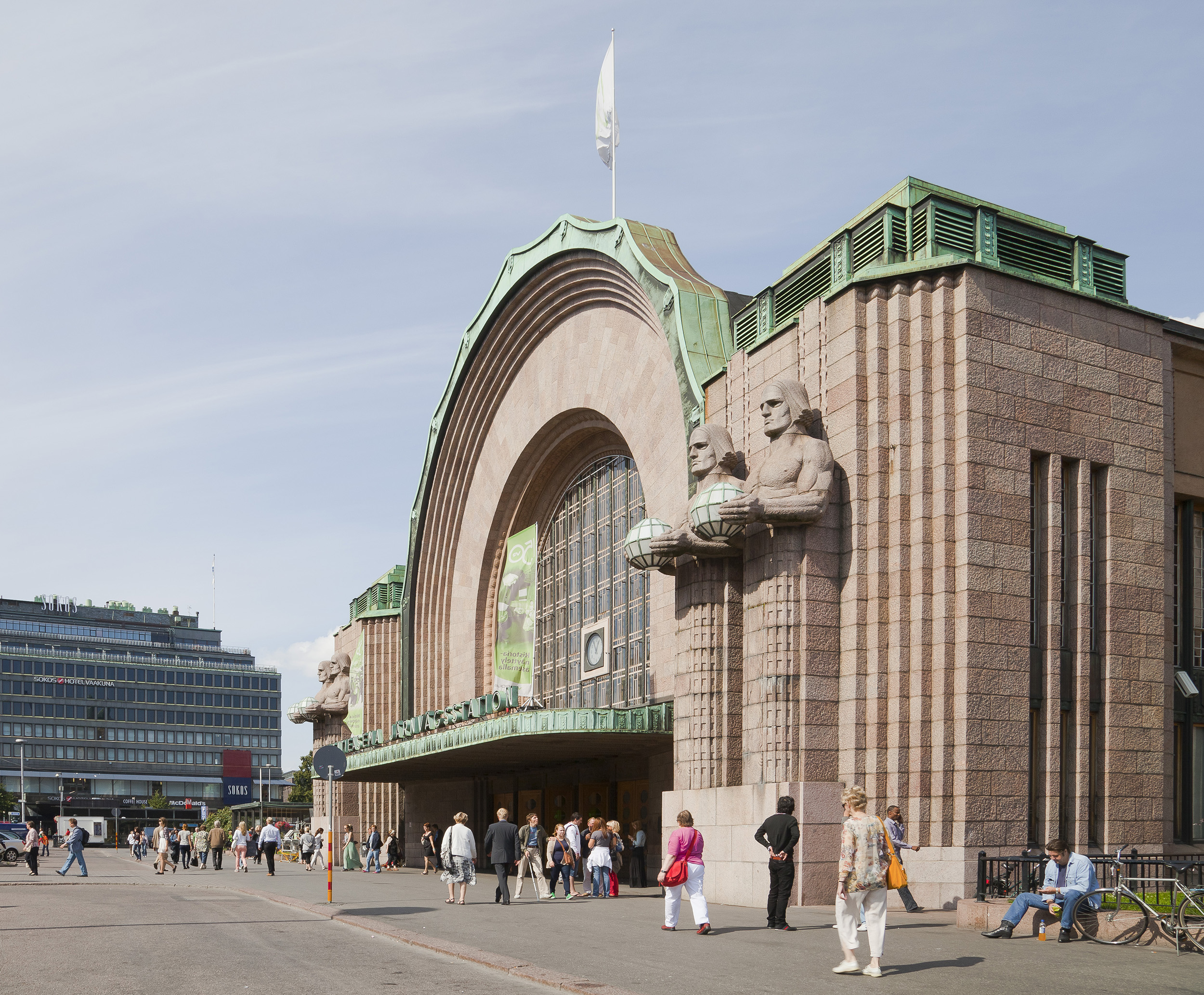 It’s not the first time we’ve headed off to Northern Europe in this newsletter: after Copenhagen and Stockholm, now it’s the turn of Helsinki (the future terminus of Rail Baltica). Here citizens enjoy a quality of life unparalleled in much of the continent, and it’s worth making the trip to understand why. While the end of year approaches and kids dream of the white plains of Lapland, let’s discover the perennial charms of the Finnish capital.

As soon as you arrive, you’ll be blown away: the entrance to the Art Nouveau station is ringed by four giant sculptures: the Lyhdynkantajat, by artist Emil Wikström, which give the rail station a look that’s equal parts solemn and sublime. And because you can always learn a lot about your destination from its train station, you should know that these giants were inspired by the Kalevala, an epic that has taken on whole new significance since Finnish independence in 1917.

Next, you”ll want to head to the Temppeliaukio kirkko, a church that’s literally carved out of the rock. Architects the Suomalainen brothers dug deep into the mineral and created this huge concrete and granite structure, topped with a beautiful copper dome. The result really is stunning. We recommend looking at the events programme and taking in a classical concert.

In fact, when it comes to culture, the Finnish capital brims with brilliant art. Definitely check out the Kiasma, the city’s main contemporary art museum (though note that the museum is closed until spring 2022 for renovation). There’s also Amos Rex, a museum that specialises in Finnish art of the twentieth and twenty-first centuries. Right now, a lot of people are also talking about Inner Journey, a new exhibition from video artist Bill Viola. In a city where life very much revolves around the water, his highly aquatic art clearly resonates.

You’ll also want to hit up the Munkkiniemi neighbourhood to take in the house of an architect and designer who’s become pretty much synonymous with his homeland. Alvar Aalto was the godfather of Finnish design, with his approach that combined a humanist outlook with an affection for nature. Get an idea of his art with a tour of his house – all wood, glass and other elegant materials. He designed everything here, right down to the plant pots.

The Finnish capital is in fact an archipelago composed of 330 islands and a number of them are well worth the detour. Suomenlinna is the best known of the bunch: head out here for long walks along the walls of a fortress built by the Swedes in the eighteenth century, before traipsing around paths surrounding the Gulf of Finland. Just opposite this island you’ll find Vallisaari, a luxuriantly green island that’s only been open to the public for five years.

If you’re in Helsinki in winter, the sauna is another must-visit as soon as night falls. A few of our recommendations, if you fancy a spot of quiet, steamy relaxation: one of the most popular is Kotiharju, while Sompasauna is a more traditional spot and Löyli is one for design heads.

And don’t forget the food. Soak up the vibes at one of the city’s famous markets, like the Hietalahden Kauppahalli or the Vanha Kauppahalli, where you can tuck into sausages, dried meats or smoked fish, either to eat there or take away. Prefer somewhere a little upmarket? Try Grön, where everything is local, seasonal and organic, or Nolla, a seriously good zero-waste restaurant. There’s also Juuri, whose food is as good as its natural wine, and Viild, with its so-called ‘vegan wild food’. Sweet tooths will want to try the pastries at Gateau or Teemu Aura for breakfast or as a snack.

On final tip before you leave? December 13 is Saint Lucia, one of the most important celebrations in the Nordic countries. On this day, as the winter solstice approaches, locals celebrate ‘light’ in all its forms (hence the name Lucia). Processions criss-cross cities across northern Europe, and as the cold really sets in, that makes Helsinki (and the other capitals of the Nordic countries) a truly magical place to be.