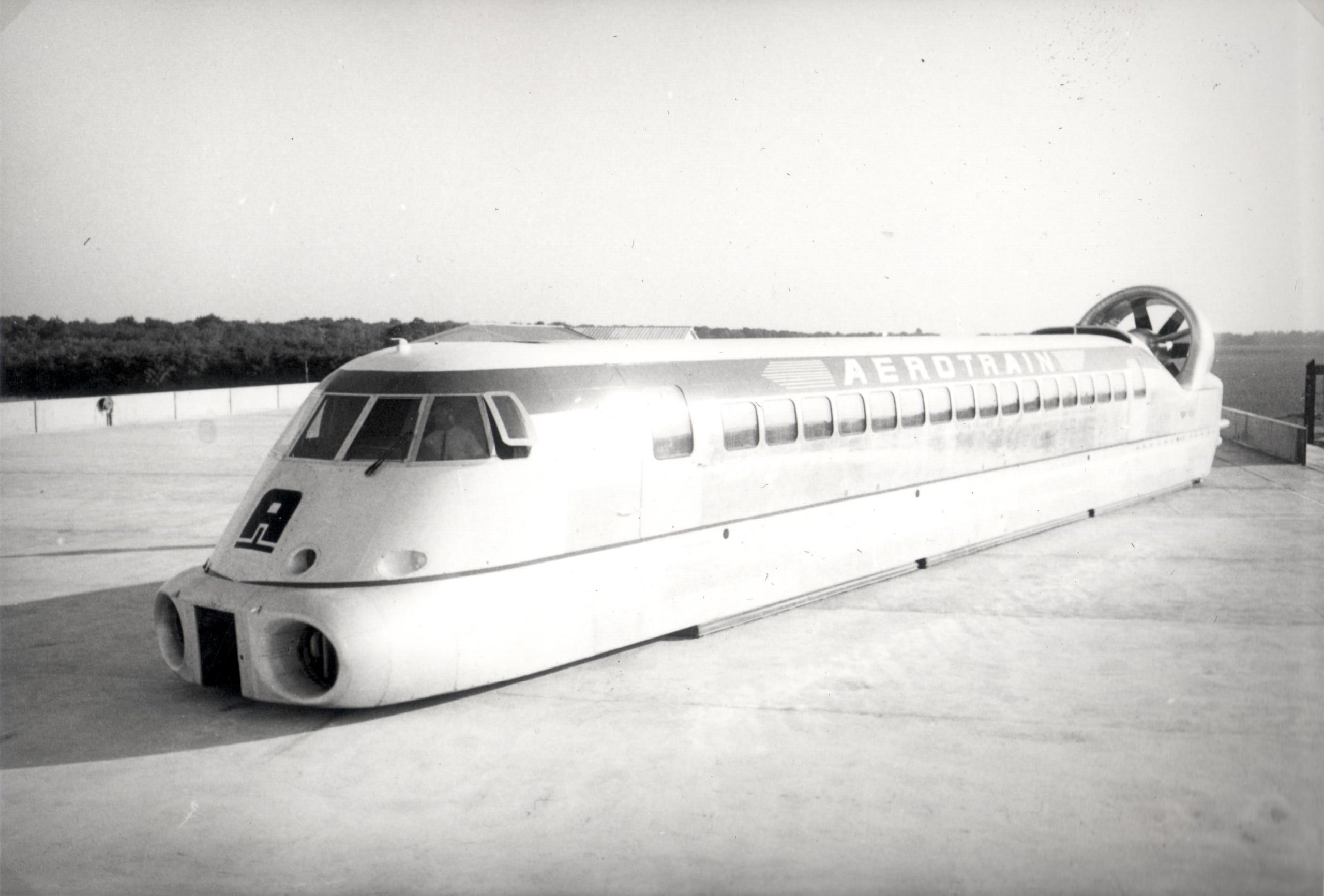 A tale of French genius and failure

Is it a bird? Is it a plane? No, it’s an Aérotrain. That’s how the credits for a Netflix series about this far-fetched invention would start. The backstory of this so-called ‘hovertrain’, the brainchild of one crazily inventive French engineer, really is worthy of a Hollywood movie, and some even say it’s what inspired Elon Musk’s own Hyperloop vision.

The idea of the Aérotrain emerged in the mind of Jean Bertin during the 1950s. At the time, the talented engineer managed a company called Bertin & Cie. While there, one of his workers discovered what is known as ‘ground effect’ when working on mufflers for motors. Simply put, Bertin and his team realised they could make their vehicles hover a few centimetres above the ground thanks to the technology they’d been working on.

After a little more research, Bertin was thinking about giving up. He had worked out that the vehicles required would have to be gigantic if they were to work. But then he found out that a group of English researchers were thinking about launching a hovercraft, a vehicle based on technology like his. So he got back stuck in and started looking for more funding. First up, he started developing a military vehicle called the Terraplane BC4. While it never progressed beyond being a prototype, the patent for his vehicle was considered by Jean Bertin as the birth of the Aérotrain.

The engineers considered that his technology had huge potential and next he wanted to develop a means of passenger transport that relied on a ‘air cushion’. The RATP was initially, but then backtracked after it realised it would have to redevelop its entire underground network. Unlike conventional railways, the Aérotrain would move along one single concrete rail in an inverse T shape. But the amount of work involved didn’t deter SNCF, which was next to show interest. France was desperate for high-speed trains and Bertin’s project immediately seduced the operator. An official Aérotrain committee was created, within which the project was code-named C02, while C03 was none other than TGV.

‍Things picked up speed. In 1965 prime minister Georges Pompidou, who would become president in 1969, declared himself into the idea. Huge public investment followed, and allowed Jean Bertin to build a prototype capable of transporting four people. Thanks to a propeller and plane motor, it could reach speeds of 200 km/hour on a specially built line on the remains of the former Paris-Chartres line. The following year, it reached a whopping 345 km/hour, which is more than the cruising speed of the TGV (320 km/hour).

A new test line was soon built just north of Orléans. It was 18 kilometres long, and made up of 120-metre segments, resting on 900 ten-metre-high posts. Thanks to a second prototype, the Aérotrain managed to reach 422 km/hour in 1969, then 430.2 km/hour in 1974. It wasn’t until 1981 that the TGV surpassed 382 km/hour and 1989 that it outperformed the Aérotrain. And still today, the latter holds the record for any air-cushioned vehicle.

It was those air cushions, in fact, that allowed it to travel so fast. They lifted it off the ground and avoided all friction caused by the latter, which is one of the main factors that slows down terrestrial vehicles. Bertin’s technology seemed viable and the lines were designed to be installed all over France: Paris-Orléans in 15 minutes, Paris-Lyon in an hour and so on. Astonishingly, Aérotrain wouldn’t pick passengers up from a platform next to the rails but from dedicated platforms. The idea was that it would remove itself from the rails, do a half-turn and pick up the passengers before taking off again.

However, in 1974, things took a turn for the worse. The previous year, the financial world was jolted by the first petrol crisis, which forced the Aérotrain and the TGV to rethink how they were propelled (using combustion engines). While the high-speed trains were able to rely on electric tracks, their competitor was unable to find a similar solution. But that didn’t prevent a contract for the construction for an Aérotrain line from Cergy-Pontoise to La Défense in Paris from being signed. Soon, though, rather inevitably, it was cancelled.

Georges Pompidou died in 1974, handing over the keys to the Elysée to the young Valéry Giscard-d’Estaing. The latter wasn’t so keen on the idea as the predecessor, and under pressure from the SNCF, Cergy-La Défense instead got a standard train, now one of the main branches of the RER A. Jean Bertin understood that his invention would never really come to be, and died in 1975 from cancer. The Aérotrain only survived him by a couple years, with its last flight taking place in 1977. Little trace of it remains today but a couple of test lines and various bits of technology stored in hangars. For several years, fans of the idea have tried to revive the project, but it all seems rather utopian now.

In 2012, it told a Californian newspaper how he intended to launch a mode of transport travelling at more than 1,000 km/hour thanks to capsules propelled in a vacuum tunnel.

The costs of space exploration

For several years now, several of the world’s most influential entrepreneurs have had their sights set on space travel. The likes of Jeff Bezos and Richard Branson are sure of it: they’re going to make interplanetary tourism a thing – and make a huge success of it, too.