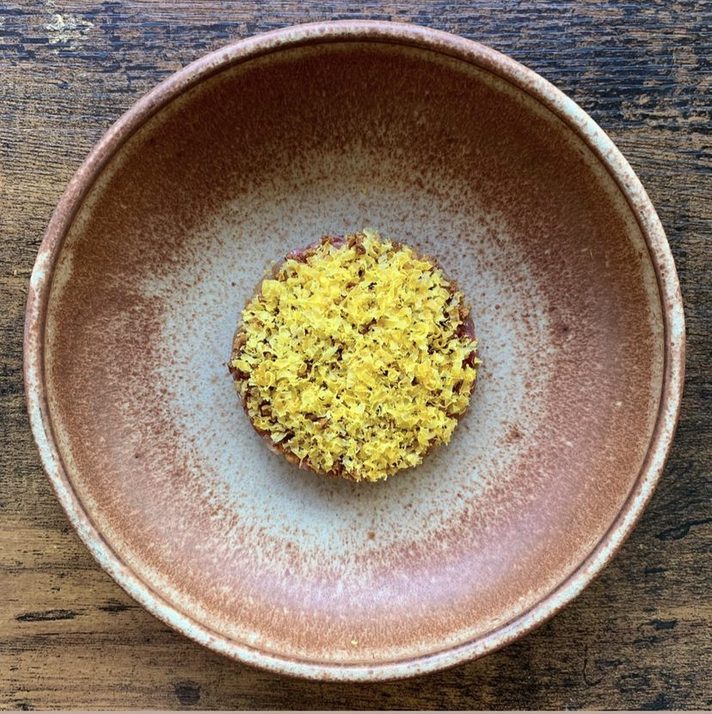 It's the turn of Danish chef Christian Kanstrup Pedersen who heads up Michelin-starred Pure & V (Nice, France) to share one of his favourite recipes: a beef tartare you’ll probably be thinking about for weeks afterwards. To the kitchen!

Mix all the ingredients together to make the tartare base, add salt and pepper to taste.
Line up four plates, place a cake ring with a diameter of 6 centimetres or a similar mould in the middle of the plate.
Add five small dots of the egg yolk cream inside the mould, then top it off nicely with the tartare base. Sprinkle the tartare with the crispy onions, and finally grate a generous amount of the dehydrated egg yolk on top! Et voilà!

Salted kohlrabi
1 medium-sized kohlrabi
10g salt
100ml apple cider vinegar
Rinse and clean the kohlrabi, then cut into small cubes. Weigh off 100g, mix in the salt, then store in an airtight container or, even better, vacuum-seal it. Let it sit for at least two days in the fridge (but preferably seven). Place the kohlrabi in a sieve and rinse off the salt, then transfer it to a plastic box and add the apple cider vinegar and mix together. Let it sit for at least two days before using.

Egg yolk crème
Six eggs
A pinch of salt
Use a sous-vide stick in a water bath, to reach a temperature of 63,5 degrees Celsius. Then carefully place the eggs in the water and let them sit for 2 hours, cool them down, crack them and discard the egg white, press the egg yolks through a fine mesh sieve, add a pinch of salt, and whisk it together, keep in a piping bag.

Dehydrated egg yolk
4 eggs
75g sake
75g soy sauce
75g water
Mix the soy, sake and water to make a brine, crack the eggs open and separate the yolks from the whites. Carefully add the egg yolks to the brine and let sit in the fridge for at least 24 hours. Carefully remove the egg yolks from the brine, put them on an oven tray covered with parchment paper, turn up your oven to 70C and put the tray in the oven with a spoon in the oven door, allowing the moisture of the eggs to evaporate. Let the eggs sit in the oven until they are completely dried out – this process can take between five and eight hours, depending on the oven. After drying the eggs out, allow them to cool down before transferring them to an airtight container in the fridge.

Crispy onions
Two brown onions
400ml sunflower oil
A pinch of salt
Peel and chop the onions in 3mm slices: a Japanese mandolin is your best friend here. Heat up a pot of water, lightly salted, add the onions to the water, stirring them around for a couple of minutes, until they are lightly cooked and almost transparent. Pour out the water and rinse the onions under cold tap water for a couple of minutes. Dry the onions carefully on a kitchen cloth. Heat up the oil in a small pot, use a thermometer to reach 110C, cook the onions in the oil, stirring once in a while for five minutes (or until lightly golden). Put the onions on an oven tray and bake at 150C for five minutes. Transfer them to a box lined with paper towel, to absorb excess oil. Let the onions cool down, chop roughly and add a pinch of salt.

To accompany this sumptuous tartare, the founder of Pure & V, Vanessa Massé, has helpfully recommended one of her top wines. And take note, because Vanessa Massé is none other than the best sommelier of the year, according to the coveted Michelin guide. Her choice? The FATAL(E) 2018 by Catherine Bernard and Vin des Potes: a rosé that combines carignan, mourvèdre and grenache noir grapes.