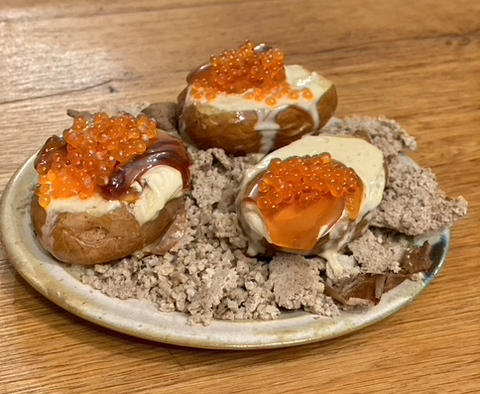 A recipe from one of France’s best chefs

This Parisian restaurant has only just celebrated its fourth birthday, but has already gained legions of fans. When Edouard Bergeon – the man who realised the brilliant film In the Name of the Land – and Loïc Martin opened Robert in Paris’s tenth arrondissement in 2018, both aimed to serve up plates at once guided by the seasons and showcasing the best produce from the regions surrounding Paris. In fact, a large part of what you’ll find on your plate comes from the Jardin-sur-Loire, a region that’s home to 120 varieties of organic, untreated grains and 70 kinds of fruit tree.

To make the most of all that great produce, they handed over the reins of the kitchen to one of the best chefs in France. And that’s official: in 2021, Daniel Morgan was named the best chef of the year by the prestigious Le Fooding guide. We’d describe his approach as pretty punk – no doubt a nod to his British roots. Taste his food and the explosion of flavours feels like poetry.

Daniel Morgan’s cuisine always seeks to find the missing link between humanity and the stuff nature has always helped sustain it with. This week, try to imitate his singular cooking style with this recipe for salt crust baked potatoes with raw cream, beurre noisette, trout roe and dashi jelly.

For the salt crust baked potatoes

For the infused raw cream‍

Make your salt crust by mixing together all the ingredients, then dividing the paste into as many parts as you need to cover each potato.

Once all the potatoes are covered in paste, cook them in the oven at 220C for 15 minutes. Leave them to cool for enough time for the potatoes to burst. Put them to one side in a warm place.

Next, make your dashi. Place the water and kombu in a saucepan, then cook slowly for an hour at 60C. Raise the heat and add your bonito flakes, letting them infuse for five minutes. Add the soy sauce and mirin, then season with salt to taste.

Measure out 200ml of the dashi, while letting the two gelatine leaves swell in water. Add the gelatine to the dashi, mix well and place in a container in the fridge.

Next, make the beurre noisette, by cooking your butter in a high-rimmed pan on a high heat until it is golden and gives off a nutty aroma. Pass through a sieve and keep warm.

Time to make the cream. Mix the raw cream with the habanero sauce and lemon juice and zest, then whip the cream until soft peaks form. Season with salt.

To serve, warm up your potatoes in the oven, then cut off the top (as per the photo) and apply a generous amount of cream, before adding a big spoonful of dashi jelly, trout roe and chives. Place the top back on and cover with the beurre noisette. Bon appétit!

Paris’s hottest chefs, Simon Aushcer (who’s already appeared in a previous edition of Midnight Weekly) to share one of his favourite recipes. Once again, his choice very much adheres to the principles of sustainable cooking – something integral to his culinary philosophy.

The bakery in question is Nice’s Zielinska. Its founder, Dominika Zielinska, has been serving up delicious baked goods for two years now, and it was recently honoured by the Guide du Fooding. But you won’t find any baguettes or croissants here. Instead, everything is made using ancient grains and has a lengthy fermentation process.