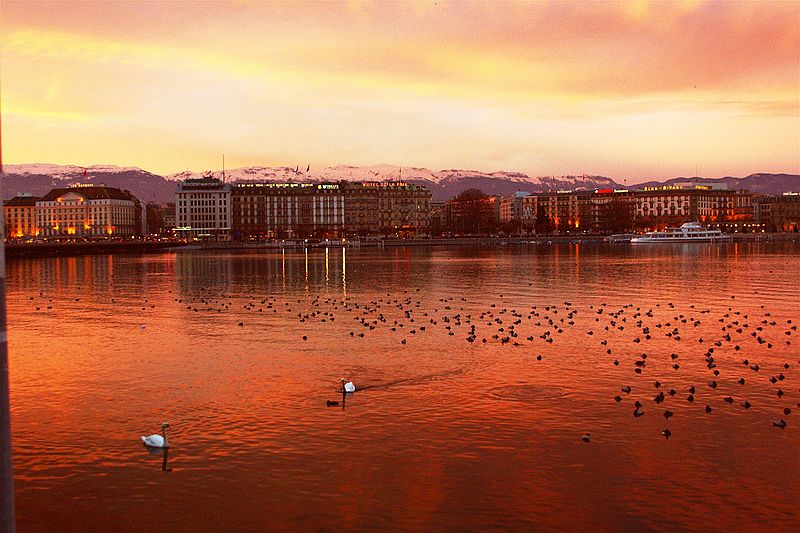 Our train is dropping you off in one of the world’s most liveable cities. In fact, Geneva regularly appears in top tens of the best places to live in the world, and even though the health crisis may have caused rankings like this to change somewhat over the past couple of years, the charms of this Swiss city remain clear for all to see. Let’s take a closer look.

To familiarise yourself with the relaxed pace of life in the so-called ‘Capital of Peace’, you should start by wandering around the streets of the old town. A serene sense of calm will take hold over as you stroll. You’ll discover architectural gems like the town hall, the Place du Bourg-de-Four and Saint-Pierre Cathedral, where Jean Calvin made his case for the Reformation on several occasions. Like him, many others have been inspired by the historic heart of Geneva: Jean-Jacques Rousseau lived there, with his former home now dedicated to the arts. This is also where he wrote the first version of his Contrat social.

Next, you’ve got to take in that majestic body of water. Talk a walk around the lake and marvel at the famous water jet which soars 140 metres above Lake Léman. Then embark on one of the mouette boats that will allow you to look back at the city from the water. Note that boats will even take you all the way to Evian.

Back on dry land, there’s loads of incredible culture to take in. Start off with the MEG, the city’s ethnographic museum. Having moved a lot as its collection has expanded, the museum is now housed in a striking modern building with a very unusual design. Since 1901, when it was founded by anthropologist Eugène Pittard, the MEG has aimed to use objects and artefacts to help people understand cultures in every corner of the globe. You’ll find no fewer than 74,000 objects, 100,000 photographs and 300,00 books and documents here.

When in town, you’ll also want to visit the Palace of Nations and the eponymous surrounding neighbourhood. This is where you’ll find a number of international organisations including the seat of the UN. In a similar universalist vein, the International Red Cross and Red Crescent Museum is well worth the detour: temporary exhibition Un monde à guérir features more than 600 photographs, from 1850 to the present, that document the NGO’s prolific humanitarian work.

Obviously, no trip to Switzerland would be complete without a generous dose of chocolate. And it must be said that in Geneva, you’ve got quite a lot of choice. Try master chocolatier Philippe Pascoët, who serves conventional flavours and pairs chocolate with basil, sage and coriander. Eat some in the café or fill your suitcases with Christmas presents for friends and family. Another good shout: Hautlé, a century-old institution just as famed for its pastries as its chocolate.

Ready for a proper meal? Here are a few of the city’s very best restaurants. Whether you fancy an apéritive or a dinner packed with punchy flavours, try Natürlich, which shares premises with the delicatessen L’Idéale. For its part, the Fiskebar serves up high-quality, Scandi-inspired dishes that contain predominantly local and organic produce. And if you fancy some Thai food? Soï would give many restaurants in Bangkok a run for their money (especially with the added bonus of a great natural-wine menu).

One final tip before you jump on the train: each year, Geneva organises the Geneva Lux Festival, which echoes the city motto, Post tenebras lux (after darkness, light). In these gloomy winter days, with Omicron threatening to put Christmas off course, that’s a sentiment we can all get behind. And hopefully, if we make it out the other side, we’ll be able to head along to the festival ourselves: it takes place from January 21 to February 6 2022, with 21 luminous artworks lighting up the city every night.