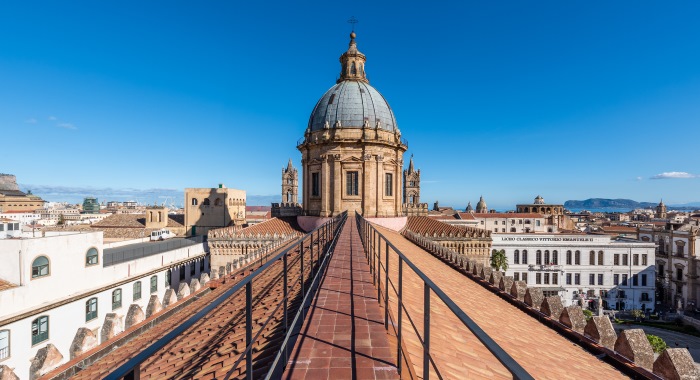 As autumn segues into winter, we’re taking the opportunity to head to sunnier climes in Midnight Weekly – and this week, we’ll be singing the praises of Palermo. Tucked in the north (relatively speaking) of Sicily, this luminous city is a land of contrasts which will win you over thanks to both its amazing art and architecture, and locals’ laidback way of life. So let’s wander around a little to see what it’s all about.

Norman and Arab influences blend in this historic city, and we’d definitely recommend taking in a handful of beautiful buildings that do a good job of illustrating the city’s multicultural past. First up, visit the Palatine Chapel, which is perhaps the best example of the two cultures commingling in one place. Tucked inside the Norman Palace, which started out as an Arab fortification, this magnificently-mosaicked capella is the now the nextdoor neighbour of the Sicilian parliament.

Next up, take a look at the Martorana, an orthodox church that dates back to the twelfth century. But despite the age of the place, its mosaics and golden features are no less dazzling for it. Slightly more austere are the Capuchin Catacombs, which offer up a rather… let’s say… original experience. More delicate souls might not want to head down there: there are no less than 8,000 mummified bodies that have been stored down there (and continue to decompose), still in their ancient ceremonial robes.

For something a little more vivifying, hit the streets again. You couldn’t visit this city without simply going for an aimless stroll and taking in the city’s distinctive architectural features. One good example is the setting offered by the Piazza Marina, whose majestic buildings glimmer in the sunlight all year round. The square itself is quite a sight to behold, but the surrounding palazzi are even more eye-catching. Another of the city’s most iconic squares is the Piazza Pretoria, with its five-century-old marble fountain, which is most spectacular at sunset.

Now, how about a spot of nature? Your best bet is the orto botanico, which has welcomed fans of tropical plants since 1795. Today there are more than 12,000 different species in this extraordinary garden, which covers a whopping ten hectares. It’s a thoroughly tranquil place for a leisurely stroll.

And those who like to swim will be pretty happy here too. Head just a few kilometres out of town and you’ll find turquoise water and white-sand beaches to die for. The closest is Mondello, a village-turned-seaside resort. Whether you go to simply kick back in the sun or go for a dip, it’s hands down the easiest spot to get to from Palermo. For those who fancy a longer trip, hop on a ferry to the Aeolian Islands for a few days. These volcanic islands will make an unforgettable impression on you.

As the day comes to a close, make sure to squeeze in a decent dinner. You’re in a good place for it: Palermo locals, like Sicilians in general, are really into their food. A few places we’d recommend: Liberta Vini Naturali e Cucina, Cicala, Bottega Monteleone, Buatta and Radici. But this being said, you shouldn’t overlook all the food stalls you’ll find on street corners all over the city. This city must be one of the world’s street-food capitals and you’ll come across fish, veg, seafood and all sorts of fried things flying off the grill. Try the Capo Market and the Piazza Caracciolo.

As night falls, you’ll want to hit up the ever-frenetic Vucciria, a marketplace by day and the place to head after dark. Those who like a big night out will be pretty happy here. Go from bar to pub, ad infinitum, and you’ll no doubt get to know some pretty friendly locals – and want to do exactly the same thing the following day, too.