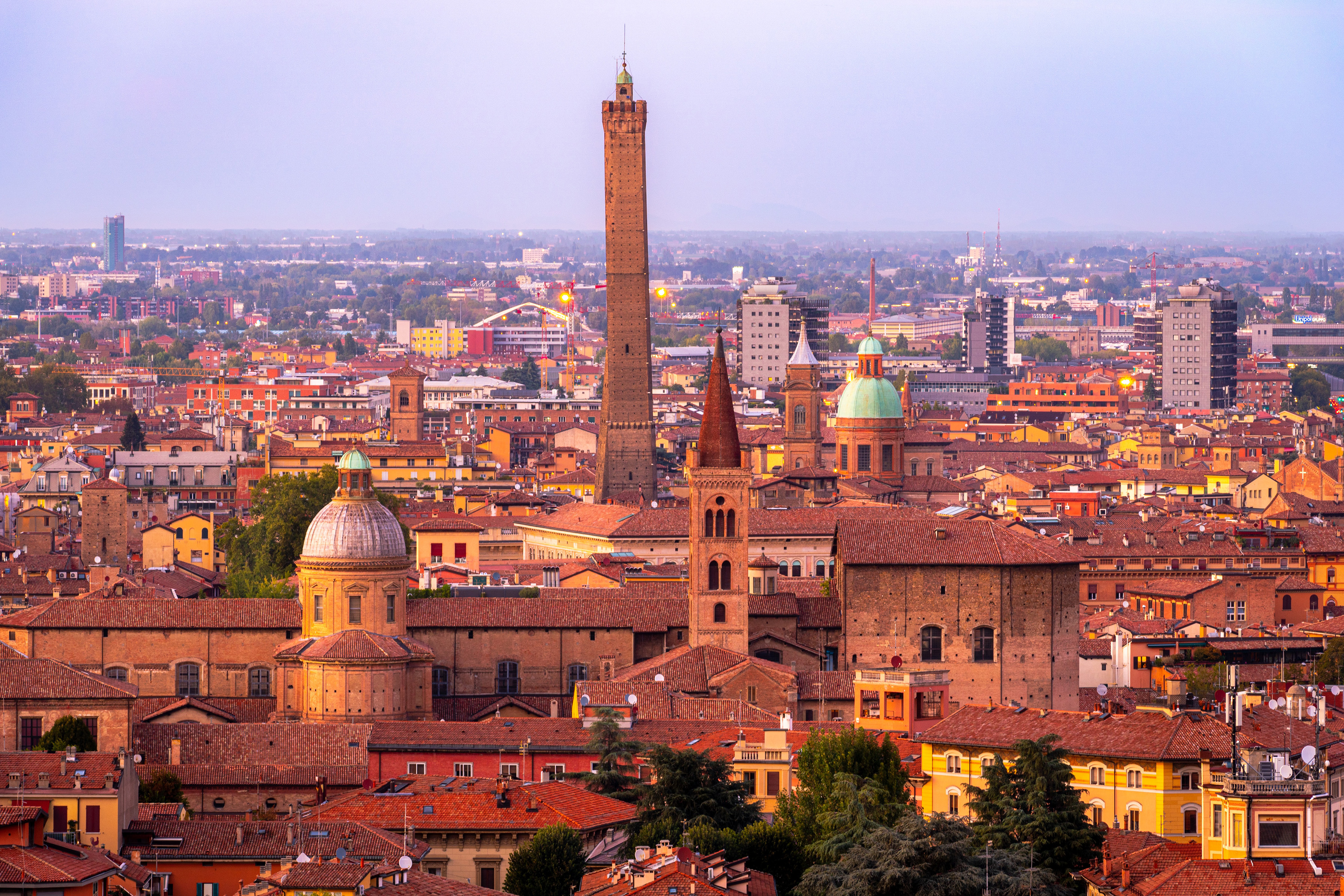 Our brief two-minute stopover this week? Let’s try Bologna. The capital of the Emilia-Romagna region is so much more than the home of spaghetti bolognese. In fact, as it happens, you won’t even find the dish down there: it’s a foreign invention. Here’s where to find the real Bologna: a city of three very different identities.

This city is known as Bologna la Rossa (Bologna the Red). It owes the nickname both to the bricks and tiles of its buildings and to its leftist politics. To get a feel for the place, you should first head to the Piazza Maggiore. This square has been the city’s beating heart for centuries and all around it you’ll find sumptuous palaces like the Palazzo dei Notai,  Palazzo del Podestà and the Palazzo Re Enzo. Examine them and you’ll immediately understand how the Bologna la Rossa moniker came to be.

Just around the corner, you should definitely drop by the Piazza del Nettuno, with its foundation dedicated to Neptune (otherwise known as the God of the seas, Poseidon). Originally, however, it was built as a symbol of the power of Pope Pius IV just after his election. But this fountain doesn’t feel all that Catholic: the sculptor Giovanni di Bologna may have made sure to represent the God of the Sea with his formidable trident, but around him there are also four rather suggestively languid sirens. And the water? It spurts out of their breasts.

In a much more serious vein, two basilicas will blow you away with their architectural splendour. Santo Stefano, for its part, is made up of four churches joined together, while San Petronio is even more original. After two years of building works, its façade was left as it was – unfinished – and each day an impressive phenomenon takes place: a beam of natural light gradually passes over the entirety of the building until it lands on the columns, where it forms a heart-shaped projection – now a source of many superstitions.

One other unmissable architectural sight in Bologna la Rossa is the Due Tori. Of these two towers, the Asinelli Tower is the highest, at 97 metres tall. Climb its 498 steps to take in a panoramic view over all of Bologna and marvellous red roofs.

Bologna’s second nickname is Bologna la Dotta (Bologna the Wise). Why? Well, to start with, the city is home to Europe’s oldest universities. These days, the city is also filled with rather recherché museums. Here’s a selection of the very best. Start with the fine arts museum Pinacoteca nazionale di Bologna, the city’s largest, where you’ll find a whole host of masterpieces by the group known today as the Bologna School, a number of whom were also pioneers of Baroque painting. Next, head to the galleries of the Palazzo Poggi, which houses the collection of the city’s Science Institute, or those of MAMbo, the modern art museum.

And then there’s the third nickname: Bologna la Grassa (Bologna the fat). For this must be one of the world’s greatest foodie cities. This city is at the crossroads of a whole host of exceptional terroirs. Forget spaghetti bolognese (and certainly don’t mention it to the locals) – instead try a plate of tagliatelle al ragù. And before you sit down to eat, have a waner around one of the city’s many excellent food markets, like the Mercato delle Erbe, which dates back more than a century. The stalls – loaded with charcuterie, cheese and fruit and veg – will make you wish you brought a whole other empty bag with you.

Now to fill up on food and drink. The four rather unclassifiable addresses of café-bar-restaurant Forno Brisa are open morning, afternoon and evening, and their wide range of produce has made it a staple of the Bologna food scene. Fancy a glass of something? Try the wine bar Cantina Letteraria, which finds the sweet spot between Bologna la Dotta and Bologna la Grassa. This establishment is filled with books and high-quality wines like those of the Coste, a go-to for Italian natural wine fans.

And when it comes to restaurants? We could dedicate an entire edition of Midnight Weekly to that subject. One unmissable spot is Oltre Bologna, which offers one of the most dazzling and refined dining experiences you’ll ever have (not least because the cocktails are also really good). Ahimè is up there with the best of the city, too; its menu brims with local specialities, creative flavour combos and exceptional wines. And if you’re after a no-frills restaurant where the menu focuses on both local produce and low emissions? Try La Svolta or Il Rovescio.