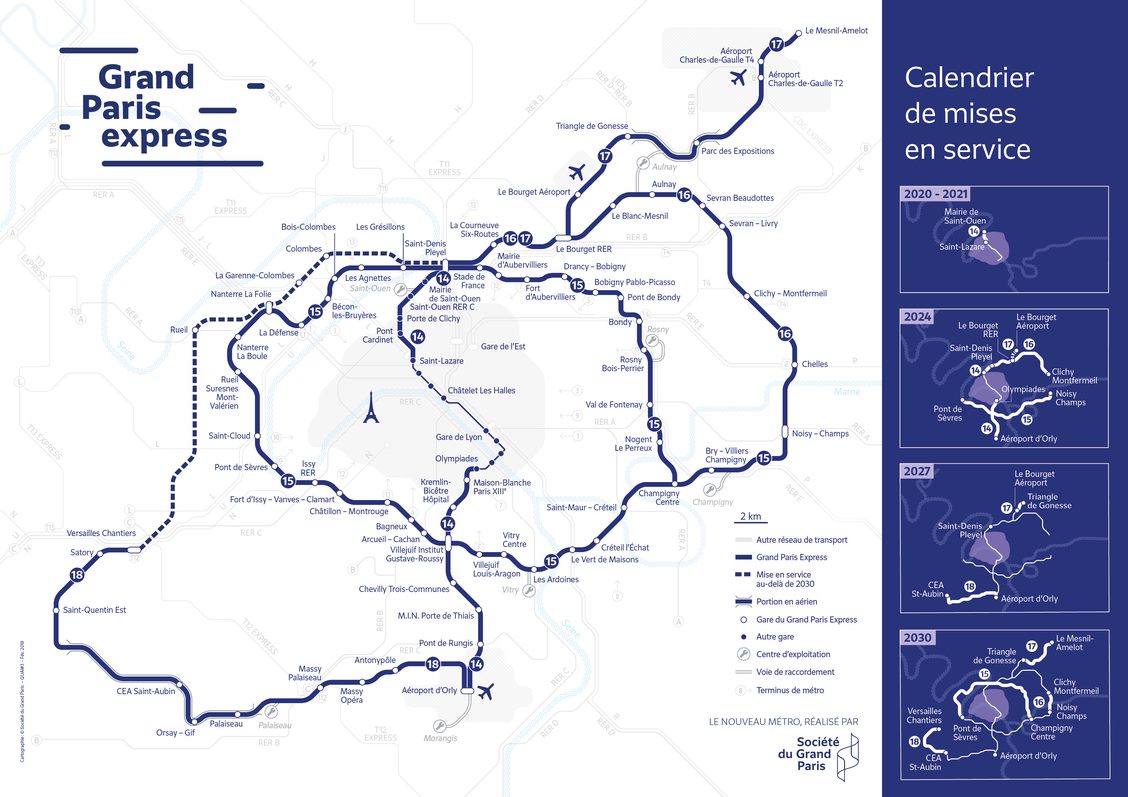 This is no less than the biggest urban railway project in all of Europe right now, and there’s a real need for it. To understand that need, it suffices to look at the public transport map for the Paris region. There’s no kidding yourself about it: it’s a bit of a mess, and can be a nightmare to get your head around. Many journeys require all sorts of unexpected changes. If you look very closely, you’ll notice much of the network is based around various big lines that were built to link the centre of town with the new towns out in the suburbs, many at the end of the Réseau Express Régional (RER) routes.

When the lines were inaugurated in the 1970s, there were few complaints. But in prioritising links with Paris and its outer limits, the city had neglected everything in between, meaning getting into the centre would prove very long-winded for a very large number of people. Today the services are often packed at peak hours, and many citizens still opt to drive into the city instead.

Evidently, that’s not good news for the environment, and it’s not great for the economy either. People need to get places in order for those very places to thrive. And that’s why, at the beginning of the 1990s, the an idea was hatched to create a sort of ‘Super Metro’ connecting up all of the city’s suburbs. It wasn’t until 2010, however, that the project really got under way. And while it was slow to get off the mark, you have to admit the current plans are very impressive indeed.

With its 200km of railway lines and 68 stations (spread across 150 square kilometres throughout the Paris region), the Grand Paris Express is one of the most ambitious urban transport projects ever to be signed off in Europe. The network will comprise four new Metro lines, which will start running gradually from 2024 – the year Paris will host the Olympic Games – through to 2030.

Unsurprisingly, it’s cost a heck of a lot. Predicted to total 26.6 billion euros in 2013, the sum was later revised to 42 billion. But once you consider that it will allow two million people to travel between Paris and its surrounding region every day, that feels like a very strong investment.

It’ll still be a few years before you can climb aboard these new trains, but now you’re familiar with the history of the Petite Ceinture (and the marvellous uses it’s since been put to), you can probably imagine a rich future for this new network. If the trains stop running one day, who knows what function it will play in centuries to come?