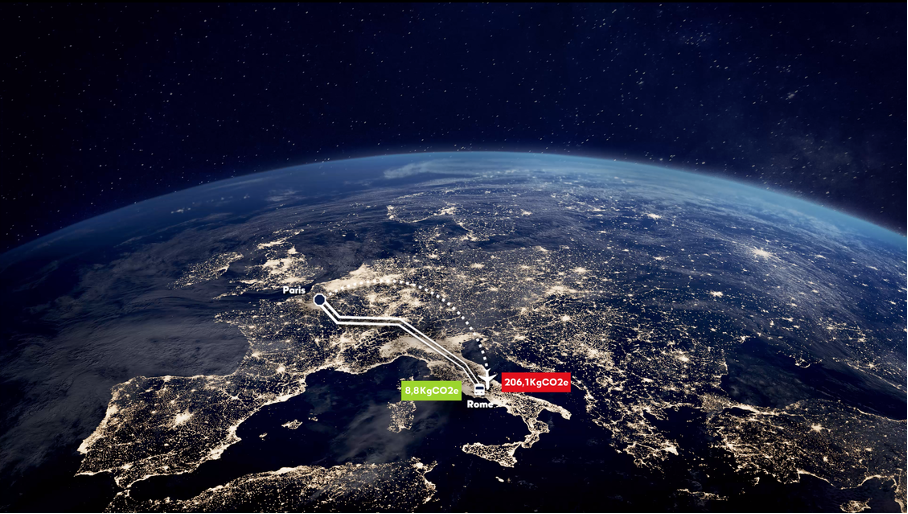 Night Night trains should be the new plane

A low-carbon journey is possible

Here at Midnight Trains, we leave the greenwashing to others. For us, it’s pretty simple: if a company has to retrospectively come up with some environmental gesture to demonstrate its impact, it’s going to the wall. Green thinking has to be part of the concept from the start, and it’s with that in mind that we decided to throw ourselves into the night-train business in Europe.

For our company, to revive the night train is first and foremost to propose a credible alternative to the aeroplane: a significant producer of greenhouse gases. By travelling on our ‘hotels on wheels’, you’ll be reducing your carbon footprint, all while benefiting from a much more relaxing way to travel.

Each year, 2.2 million travellers take the plane from Paris to Rome. If Midnight Trains were to convince 10 percent of them to take our trains instead, 220,000 travellers – equivalent to the population of Venice – would be able to benefit from the comforting, stylish and sustainable experience they’ll find on board.

And the results would be unprecedented. If you were to travel from Paris to Rome with us, would you generate only 8.8kg of CO2 – compared with 206.1kg if flying. In other words: when it comes to pollution, 23 Midnight Trains trips are equivalent to one flight with Air France, Alitalia or EasyJet. Hard to argue with that.

Of course, the aviation industry is always coming up with new ways to show just how much it is doing to boost its eco credentials. Like, for example, all the bigwigs who are aiming to cut their companies’ emissions by half… by 2050. As if the issue weren’t urgent at all. Or the hypothetical hydrogen planes – which no one knows for sure would actually work, let alone when they might be feasible – that are constantly wheeled out as the miracle solution to all the sector’s ills.

At Midnight Trains, we like to stick to facts and figures. Ones like this: if those 220,000 passengers were to travel to Rome from Paris with us, some 43,406 tonnes of CO2 would be prevented from entering the atmosphere every year. That commitment is key to our mission: we’ll play an active role in fighting climate change and we’ll help passengers do their bit too.

The people afraid of flying

All those safety protocols can get a little off-putting, let's be honest. Are you among the 30 percent of people who are afraid of flying?