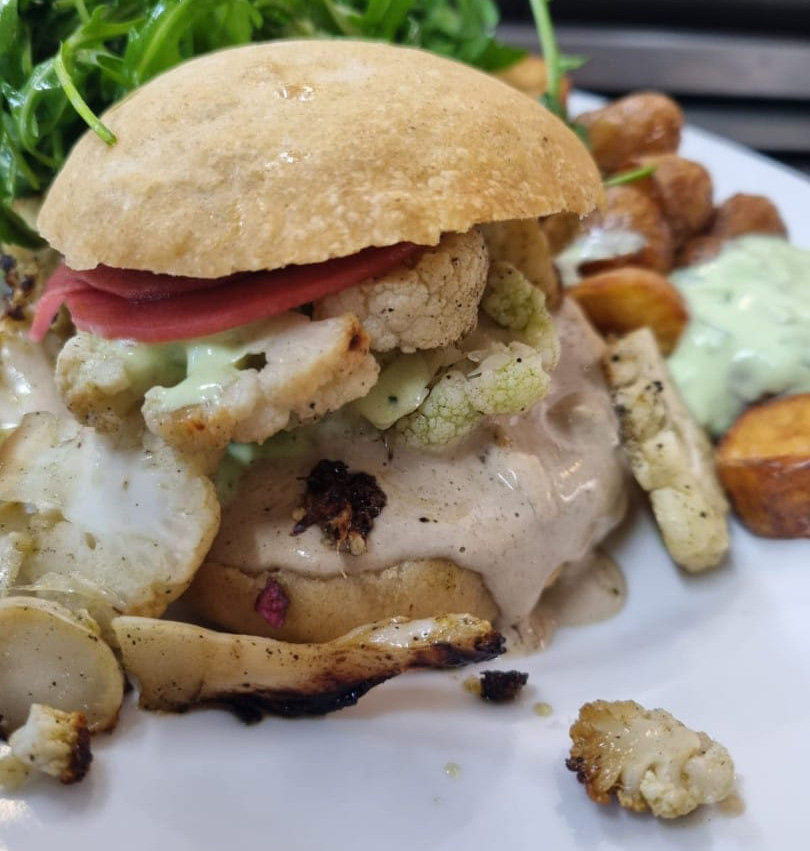 Imagine this. Smack bang in the heart of the Marais in Paris, a majestic former town hall, has been transformed into a place for the community; somewhere they can try to understand, engage with and learn all about the climate crisis. Not a bad idea, eh?

Well, that idea became a reality with the opening of the Académie du Climat in 2021: a new kind of establishment, dedicated to collective power and knowledge, aiming to provide the young of tomorrow with the means to do things differently. And because the climate crisis is so intimately connected with the food industry, the Académie du Climat had the brilliant idea of setting up its own restaurant on site too. In the kitchen of the Buvette de l’Académie du Climat, you’ll find a crack team of chefs who’ve been working in sustainable food and restaurants for a long time now.

Under the aegis of the organisation Yes We Camp, to whom we already owe the Oratoire restaurants at Grands Voisins, the new restaurant serves up plates cooked with fresh, organic, local ingredients, delivered by bike by the Marmites Volantes, from Wednesday to Friday at midday and in the evenings. On the weekend the team of chefs from Mingway pick up the baton, offering environmentally-sound street food plates and a Sunday brunch we’d heartily recommend. There’s nothing like a decent recipe to whet the appetite, so we asked Léo Aït Bahaddou and Jules Baillot, the chefs from Mingway, to share one of their go-to dishes. Here’s how to make their delish deep-fried shiatsu squash ciabatta, served with chips.

Start by making the ciabattas. First mix the dry and wet ingredients separately. Blend the two mixtures together, then set aside in a large covered container in the fridge for one night, until the dough doubles in volume.

The next day, form balls of 90g to 100g, cover and leave to rise at room temperature for 30 minutes. You can then place them in the oven at 210 degrees celsius for 20 minutes, until they are the same colour both on top and underneath.

Now it’s time to prepare the fried shiatsu squash. Roast the squash in the oven until they start to cook all the way through (while still remaining firm). Once that’s done, it’s time to coat the veg, by rolling them in a bed of sieved flour, before placing them in beaten eggs and then the breadcrumbs. Fry the veg at 180 degrees celsius.

Finally, you can put your sandwiches together. Place the fried squash in your ciabattas, then add the white sauce and, if you fancy it, some salad or pickles. Serve with home-made chips. Bon appétit!

A very typical festive French meal by Thibault Eurin, the chef at Bien Ficelé in Paris. His establishment is known for offering a unique French spin on a rotisserie-grill experience. The emphasis there is very much on sharing and conviviality, and only quality produce is to be found on the menu.

Another excellent dish by the chef, who’s widely considered one of the world’s greatest Italian cooks. This recipe was conceived as a morning-after remedy, if you’ve gone a little hard on a night out. That’s why it’s called ‘midnight spaghetti’.

Yorgaki, the first and only Greek café in Paris, on the Rue des Martyrs. When you go there, you’ll immediately feel like you’re on holiday, far removed from the bustle of the city around you. Here you can sip a classic Greek coffee, paired with a creamy galaktoboúreko: the perfect way to whisk you off to the Aegean.