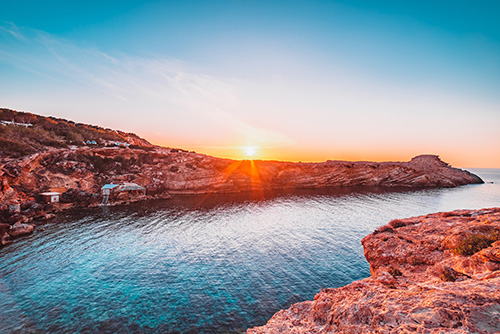 The Balearics need no introduction, such is the renown of islands like Ibiza and Mallorca all over the world. But following our sunny escape to the Cyclades last week, we’ve decided to uncover the most beautiful hidden corners of this most beautiful of regions. So grab your sunglasses and slap on the sunscreen: we’re heading off to a real paradise, not all that far from the Catalan coast.

To kick off our trip, let’s start on the legendary island of Mallorca, and to be precise, its capital Palma. This historic city is a tangle of alleyways and baroque, gothic and Renaissance buildings which come together to form a majestic and somehow coherent whole. But as is so often the case, there’s a creative spirit hidden behind all that history. Make sure to visit one of the city’s many contemporary art institutions, like the Baluard Museu d’Art Modern i Contemporani de Palma. Opened in 2014, this museum is home to little-known works by major twentieth-century names like Picasso, Joan Miró and Fernand Léger, as well as pieces by artists currently at the height of their creativity.

Having sampled the bustle of Majorca, next we’d recommend a trip to Menorca. Much wilder and better protected, this is the ideal place to immerse yourself in the Balearics picture postcards are made of. And if we had to recommend specific spots? Try Cala Rafalet and Cala En Porter y Llucalcari. The first is a cove hidden on the island’s east coast. Its natural basin is surrounded by high rocks and is the ideal spot for some snorkelling: the water is crystal clear and things are generally very quiet. The second is located at the end of a spectacular hike through forests and typically Menorcan rock formations, and has truly magical views.

Menorca brims with brilliant restaurants, but Bodegas Binifadet is probably your best shout. This spot has a pretty dreamy setting, surrounded as it is by a group of vineyards, and with a large terrace overlooking the vines. The menu all revolves around the wine. As well as cheese, meat dishes and charcuterie that go perfectly with the local bottles, the chefs serve up various wine-based sources, including one Chardonnay variety which we thoroughly recommend, and even wine-based desserts. A unique and memorable experience.

As afternoon kicks in, perhaps it’s time to hit Ibiza. It may be best known for its clubs and crowds of partygoers, but that’s far from its only draw. Vast swathes of its landmass, from the interior to the coast, have in fact been sheltered from mass tourism. To get an idea of what we mean, it suffices to hit up some of the island’s lesser-trodden corners, starting with the Sa Caleta beach. Surrounded by towering cliffs and huge pine trees, it’s the ideal place to clear the mind while lazing beneath a parasol. In another vein, we’d thoroughly recommend exploring the area the locals call Atlantis.  Named after the legendary metropolis swallowed up by the ocean, this splendid cove has a rather distinct look, thanks to the excavations that took place in a former quarry here. You’d almost think they were the remains of a lost civilisation. But whichever isolated spot you choose for your walk, you should know that you can actually do it on horseback thanks to several businesses that offer this surface on the island. It’s an excellent way to explore Ibiza and appreciate its natural beauty.

And now for Formentera, the smallest of the Balearic islands. Here you’ll be blown away by an unbelievably beautiful series of beaches, ripe for a few hours of kicking back and doing basically nothing. Our favourite is the Platja de Ses Illetes. This 450-metre-long stretch really is like something from a dream, what with those pristine turquoise waves lapping against the white sand. In the distance, you’ll notice several striking rock formations and no doubt the odd brave sailor navigating their way through them.

Keep those chill vibes going into the evening with dinner at Juan y Andrea. This veritable institution was opened in 1971 by a fisherman and his wife, and has become an unmissable spot for foodies passing through. With its huge palm trees and white-canvas parasols, this establishment serves up delish seafood dishes that would do any chef proud. Special mention goes to the lobster dishes, and above all the paella, which is particularly worth the trek. It’s happiness on a plate.