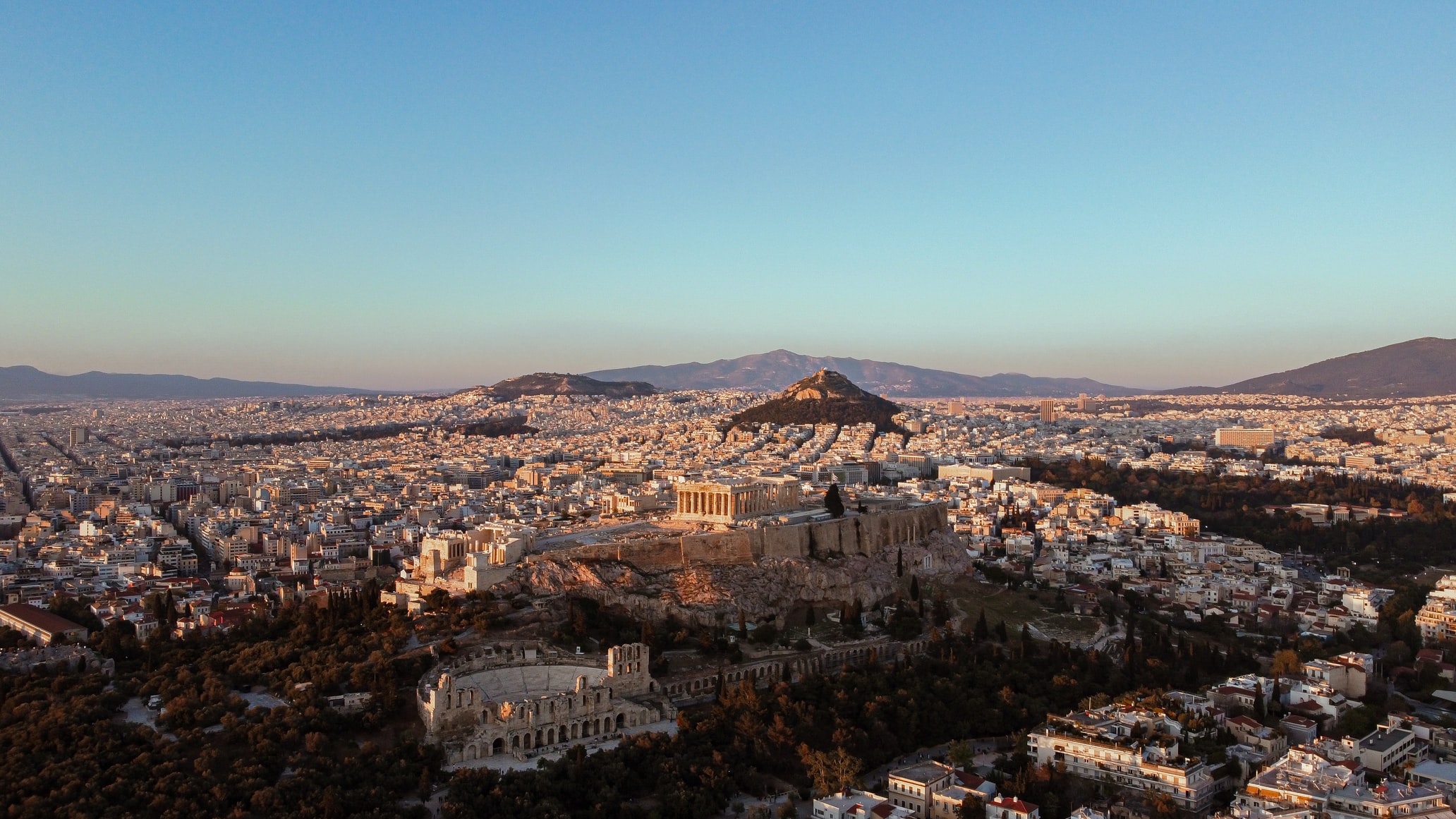 No doubt several of you have taken a boat heading for the Cyclades, without stopping at the historic capital that looks out over them. Athens is a vibrant city, infused with a distinctive Mediterranean art de vivre. No wonder this was the place our co-founder Adrien Aumont decided to launch a sleeper train company on one evening in May 2019. Let us be clear: the Greek capital is beautiful in every season, its balmy winter just as appealing as its incredibly hot summer. And now, to explore.

How was Athens born? According to myth, it all started with a dispute between Poseidon and Athena, both battling for authority over the city-in-the-making. The goddess of wisdom won out over the god of the sea and still today, the celestial battlefield is considered a pretty mythical place: the Acropolis. No trip to Athens would be complete without a trip up this hill, where you’ll find the remains of temples including the Parthenon, the Erechtheion and, naturally, the Temple of Athena Nike. While today they look blindingly white in the sunlight, back in the day they were painted in bright reds, blues and yellows – food for thought as you wander these majestic ruins.

There’s plenty of other old stuff here to help you familiarise yourself with the birthplace of democracy. Next, hit up the Acropolis Museum: this thoroughly modern building holds no fewer than 4,000 artefacts from Antiquity, several of which are truly dazzling. There’s also the Archaeological Museum of Athens, which bursts with further treasures. Don’t fancy traipsing around a museum? Plenty of historic sights can be found in the open air, like the Temple of Olympian Zeus or the Panathenaic Stadium inaugurated in 330 BC and renovated at the end of the nineteenth century (to host the 1896 Olympic Games).

Now let’s head back to the present day, and soak up that famed Athenian art de vivre. Why not wander the streets of the ancient Plaka neighbourhood, with its picture-postcard charm? In a very different vein, we wholeheartedly recommend Exarchia, with its brilliantly anarchic vibe (and a whole host of marvellous bars and restaurants, packed out pretty much all day long). For something a little chicer, Kolonaki at the foot of Mount Lycabettus is chock-full of stylish boutiques, concept stores and restaurants. But if you really want to throw yourself in there, we suggest immersing yourself in the Central Municipal Market, where it’s never not heaving (very much a good thing).

Athens is also home to loads of contemporary culture. The B&E Goulandris Foundation is a case in point: opened in 2019 in the Pagrati neighbourhood, this modern and contemporary art gallery will dazzle you with masterpieces by Matisse, Picasso, Modigliani, Miro, Monet, Rodin, van Gogh, Chagal and, Cézanne. A little further south, you’ll find the Stavros Niarchos Foundation, which houses both the national opera and national library. It was opened in 2016 and has since become a thriving social hub, no doubt thanks to its large Mediterranean garden, a green lung in a city that’s far too built up in places.

You might also want to leave town to go and explore the Athenian Riviera, which brims with little-known natural wonders. We’ll provide just one example. Around 42.2 kilometres from the city centre, you’ll find Marathon (no surprises there), where you can roam the pristine 5km-long sand beach at Schinias, having explored a pine-tree fringe filled with heady aromas. If you fancy going for a walk closer to the city, we recommend hiking up the Hill of the Muses to take in the sunset (here you’ll also find the striking Philopappos Monument).

And when it comes to dinner, there’s no shortage of Greek delights you’ll want to sample before hitting natural wine bars like Heteroclito, in the historic centre, or Paleo, down an alleyway near the port of Piraeus. If you want to try a classic Greek café, try Cherchez la femme, no doubt one of the city’s best. Fancy something tasty to go? Ekiben serves bentos to die for. And when it comes to proper sit-down meals, Atlantikos does top-notch fish, Aster is Yorgo Tloupas’s go-to, and Vezene and Frater & Soror offer a Greek take on bistronomy. Birdman, meanwhile, marries Japanese classics with quality wines, and Alficon offers an unforgettable gourmet experience.