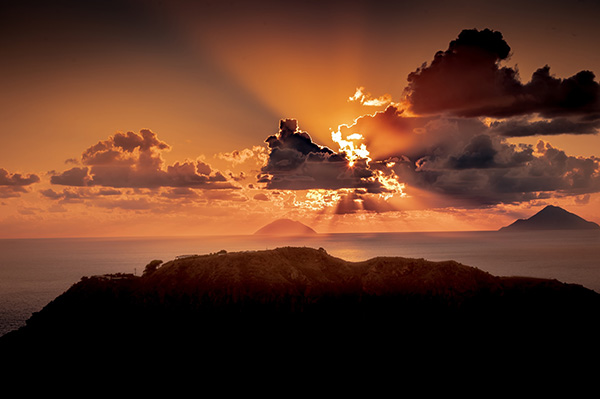 Welcome to the Aeolians

We’re continuing our tour of Europe’s most beautiful archipelagos with a trip to the Aeolian islands. To the north-east of Sicily and listed as a Unesco world heritage site since 2000, this archipelago is far less famous (and popular among tourists) than the Cyclades and the Balearics but is still an exceptional destination for all those who appreciate nature, sea air and a refreshing breeze. So put on your most summery outfit, slap on the sun cream, and let’s head out to see what this beautiful place is all about.

Let’s start on Lipari. This is the island with the most inhabitants (of the four that are inhabited) and its main town, also called Lipari, is the capital of the Aeolians. This small place is criss-crossed by narrow alleyways and full of quaint colourful houses. Take the time to wander aimlessly, and with a little luck, you’ll stumble upon the Chiesa Vecchia di Quattropani, a masterful structure whose beauty lies in its simplicity and the incredible panorama you’ll be able to take in from the square outside. And since you’re probably not in much of a hurry, make sure also to stop by one of the many traditional trattorias in the historic centre to eat something decent and watch life go by.

Into hiking? Next up, you should head to Stromboli, whose name may well make you shudder. And for good reason, as that’s also the name of the huge volcano that is to be found there. There are no dreamy beaches or paradise-like landscapes here, rather it provides the best spot for a bit of physical exertion. The results are worth the effort, though, as you’ll end up at a crater beneath which you can look down at lava explosions. Something you certainly won’t forget in a hurry.

And now for Salina. Not as well known as its neighbours Lipari, Stromboli and Vulcano, this is a green haven that’s very much off the tourist trail. To really make the most of the scenery, we recommend you visit the picturesque village of Pollara. Here you’ll find a vast stretch of white sand and turquoise waters where you can bathe (most likely alone) in a setting that’ll take your breath away. Lay down a towel and make sure to spend a while gazing out at the horizon. This place is astonishingly calm: you’ll feel alone and remote, and very much in a good way.

Following that transcendental experience on Salina, go for lunch at one of the island’s true institutions: Nni Lausta. Amid a beautifully minimalist decor filled with greenery, you’ll be able to enjoy delicate Italian dishes that showcase the freshest local seafood. But if you had to order just one thing, we’d recommend the fish carpaccio, paired with a local white wine. Because as it happens, Salina has a thriving wine-producing culture, and the examples we’ve tried truly are delicious. Special mention also goes to the lemon parfait.

Filicudi should be your next stop. Only 300 people live there, and are spread across a small handful of villages. But that’s not all. Surrounding these small agglomerations are all manner of beautiful sights. The island’s interior is home to the abandoned village of Zucco Grande and the Neolithic remains of Capo Graziano, while the sea is dotted with stunning geological features like the incredible La Canna rock and the caves of Bue Marino. The surrounding waters also make a decent spot for snorkelling. It’d be a shame not to do a bit of that.

And as for dinner? There are few better spots than the terrace at Il Cappero. This Michelin-starred establishment on Lipari has a super-laidback atmosphere, what with its epic views out over the Mediterranean. And the food is pretty stunning too: chef Giuseppe Biuso serves up refined dishes that really do titillate every one of the senses. He sums up his culinary philosophy with this at once illuminating and mysterious phrase: savour your meal as if it were a captivating journey, a mix of flavour, irony and simplicity. Highly recommended.

Grab your sunglasses and slap on the sunscreen: we’re heading off to a real paradise, not all that far from the Catalan coast.