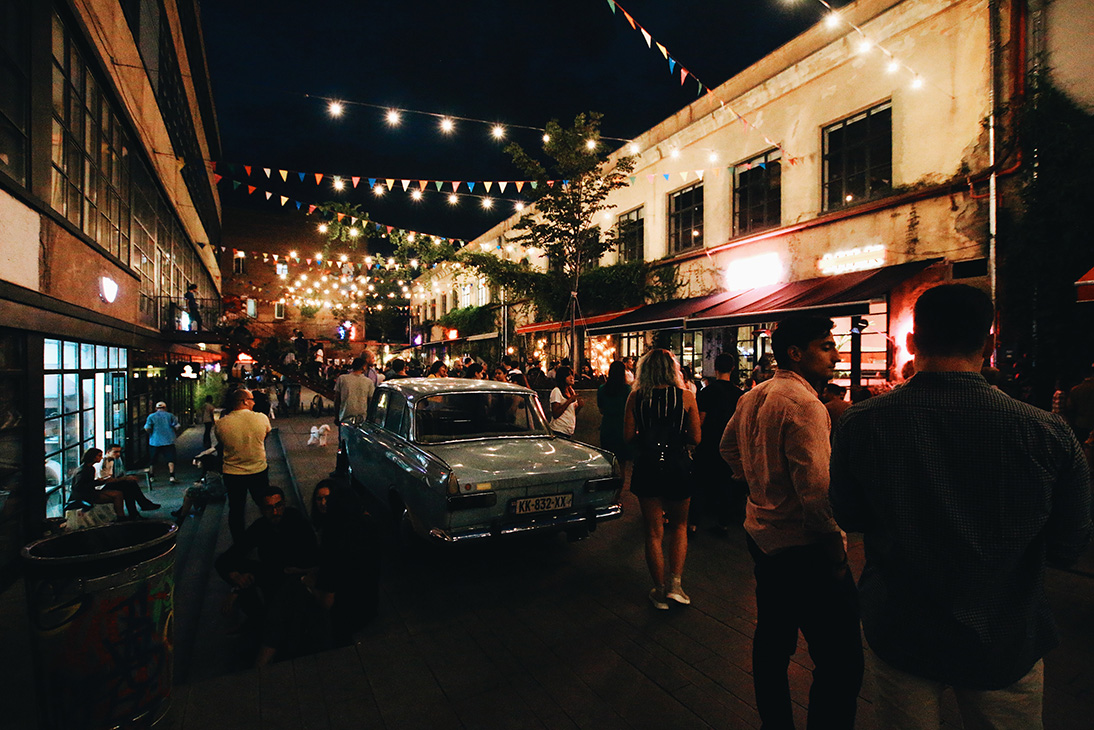 The names of some cities are drenched in mystery. That’s certainly the case of Tbilisi, the small but surprising Georgian mystery. Having toured through the likes of Malmö, Belfast and Zagreb together, now we’re heading for this small, little-known country between the Caucasus Mountains and the Black Sea. So pack a swimming costume, put on a sturdy pair of shoes and let’s head to this one-of-a-kind metropolis.

The first thing you notice about Tbilisi is the incredible range of architecture that exists here. The history here is complex, and you’ll find Soviet apartment blocks next to Haussmann-influenced boulevards, neo-Gothic structures and some truly original twenty-first creations you’d never find anywhere else. One of the most striking is the gigantic Kartlis Deda statue: a 20-metre-tall metal woman overlooking the city, sword in one hand and a cup in the other. In a whole other vein, make sure to visit the Bridge of Peace and Baratashvili Bridge. The former is a real architectural folly, while the latter, named after a famous poet, is dotted with magnificent bronze statues. Statues, in fact, are the most common form of street art you’ll find in Tbilisi. As you walk around the city, you might stumble upon the famous light bulb-changer, a circle of dancers celebrating an ancient rite of spring or even a flying man jumping out of a thicket.

After an art-filled walk through Tbilisi, it’s time to discover a hidden former printworks. Secreted in tunnels beneath the city, it was used by Bolsheviks to print tracts calling on others to back their ideas and do away with the Russian Empire that ruled at the time. Among them was a man called Iossif Vissarionovitch Djougachvili. Ring any bells? Well, he’s better known by the name Joseph Stalin.

Now for a traditional lunch at Barbarestan. This family-run establishment has pretty kitsch decor and aims to help people rediscover the recipes compiled by Princess Barbara Jordjadze in the twenty-first century. Expect all sorts of original dishes, from duck with chocolate sauce to saumon with black vermicelli. Without forgetting the majestic selection of Georgian wines – now considered to be among the world’s finest.

Next it makes sense to take part in another traditional Tbilisi activity: a soak in a thermal bath. Bathing is a huge part of Georgian culture – the name of the capital even means ‘heat source’. So it’s an excellent way both to relax and to feel like a local. Depending on how you feel, you could opt for an affordable (non-mixed) bathing spot or indeed book a private area to make the most of this unique experience with your nearest and dearest. Over to you!

Now you’re feeling a little more relaxed, it’s time to take another little walk and head to a hotel. But not just any hotel – the Stamba. Located in a brutalist-style building that was once a distillery and then a printers, it is now a multi-purpose space where culture reigns supreme. And this isn’t just somewhere to crash for the night. Among all the cement, metallic structures and lush foliage, you’ll also find a photography museum, exhibition spaces, a seven-storey vertical farm, an underground casino, a huge library and a rooftop pool. The sheer diversity of these spaces allows Stamba to put on all sorts of events and artistic performances.

Our final stop in Tbilisi is the Funicular Restaurant. As the name suggests, the restaurant is hidden inside the city’s funicular complex, built in 1938, at the summit of the Mtatsminda mountain. The first thing you’ve got to do here is to go inside the ballroom, approach the windows and take in the spectacular views over the city. As for the food, you can expect modern twists on Georgian classics. Special mention goes to the dambalkhacho chicken, and local cottage cheese in honey sauce. Oh, and we’ll say it once more: definitely try a few of the excellent Georgian wines.

Though its name may be associated with war and violence, the capital of Bosnia-Herzegovina has undergone a remarkable renaissance.

With its rich history and thriving contemporary culture scene, the Hungarian capital brims with treasures that many are still yet to explore.