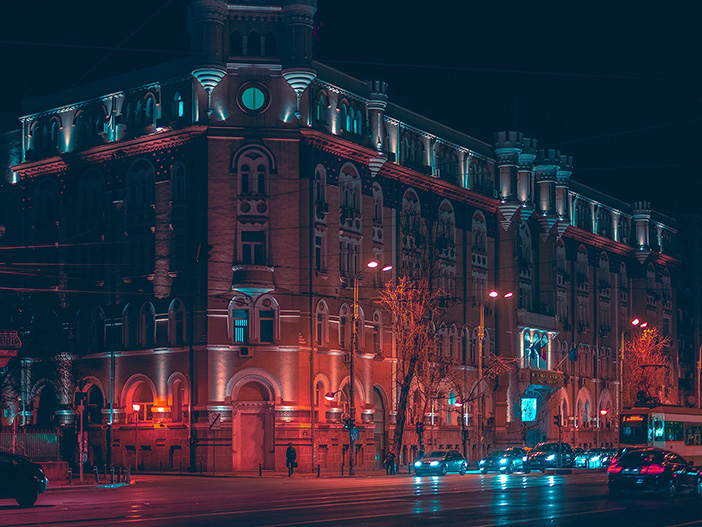 At the edge of the EU

We’re not going to lie, Romania perhaps isn’t the first destination that comes to mind when you think about a long weekend. But frankly, more of us should head out to this eastern European country, and especially to Bucharest, its sublime capital, full of all sorts of offbeat surprises. So, following our whistlestop trips to Catania, Malaga and Tbilisi, today let’s hit up the city sometimes known as ‘little Paris’.

You can immediately see why it’s acquired that nickname. First off, the architecture is pretty stunning and definitely brings the City of Light to mind. You’ll definitely want to walk beneath the touristy Arcul de Triumf while you’re here, but one of the city’s most dazzling stretches is the Macca-Vilacrosse passage, built at the end of the nineteenth century. But unlike the French capital, where the pressures of the housing market have led every nook and cranny to be transformed into a pied-à-terre, Bucharest still brims with abandoned and neglected buildings. One of them is even home to a flea market you simply must visit. Filled with bric-à-brac, ranging from hidden treasures to retro gadgets, it’s worth a visit if anything for the sumptuous decor of the surrounding, half-abandoned apartment block Strada Doamnei 11).

Romanians aren’t short on humour or cynicism. One of them, Cristian Lica, in fact founded a museum dedicated to these characteristics: the Romanian Kitsch Museum. Here you’ll find countless human inventions that range from in-poor-taste humour to romanticism pure and simple (via plenty of pretty shoddy artworks). But the real genius of the place lies in the way the objects are split into eight categories: ‘Dracula’, ‘religious kitsch’, ‘communist kitsch’, ‘interior design kitsch’ and so on. Better still, there are several workshops where you can create your own ultra-kitsch object. A rare place of laughter, culture and ‘WTF even is this?’

Next, try Hanul cu Tei, one of the city’s finest traditional inns. Built in 1833 by and for merchants, it serves generous dishes and local beers to die for. Hoppy brews are an integral part of Romanian culture, as the restaurant’s motto attests: ‘beer is proof that God loves us’. Once you’ve discovered some of the delights of Romanian cuisine, it’s also worth walking among the excellent works of art in Hanul cu Tei’s own gallery. You’ll come away satisfied with both what you’ve eaten and what you’ve seen.

Now to visit one of the most jubilant places in the entire city. Cărturești Carusel, one of the world’s most beautiful bookshops. But not only is the decor a marvel to behold, the place also allows book lovers to discover a ridiculous array of works across its six floors – we’re talking more than 10,000 books, on every subject imaginable. Bucharest is in fact filled with delightful hidden bookshops, and another we’d recommend visiting is Carturesti Verona.

Bucharestians don’t just like books, they also like legends. That’s why you should also make it over to Zlătari church. Here you’ll find a very unusual relic that dates back to the third century AD: the arm of Saint Cyprian the Mage. According to legend, before becoming Christian, the man travelled the world and managed to become a powerful sorcerer. He later converted after one of his spells was beaten back by the prayers of the person he had targeted. Make what you will of the relic, but certain people still believe it has the power to banish curses.

It’s been some time since a new generation of chefs have really shaken up the traditional Romanian cooking. Alexandru Dumitru must be among the most respected. At Bistro Ateneu he also does away with the stuffiness of a lot of modern restaurants. On the menu, he puts a modern twist on classic dishes from across the country, and they’re served by friendly staff in a comfy, playful setting. You’re practically guaranteed to discover the very best the culinary avant-garde has to offer in Romania right now. Not to mention the selection from the wine cellar, which is also excellent.

A huge inspiration for the settlement of King’s Landing in the series Game of Thrones, the Croatian city ranks among Europe’s most beautiful cities.

Though its name may be associated with war and violence, the capital of Bosnia-Herzegovina has undergone a remarkable renaissance.