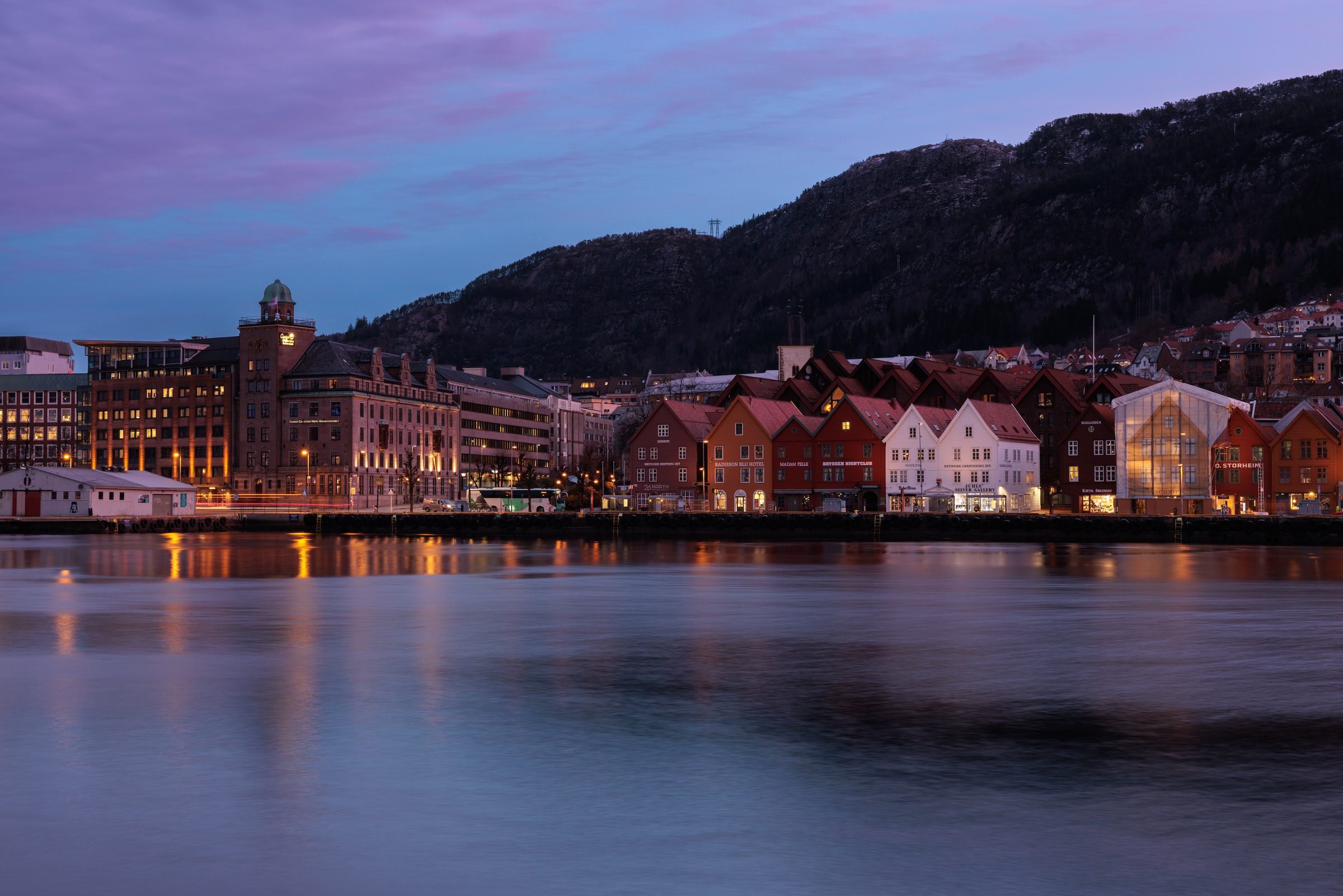 A voyage through fjord country

Having already visited Stockholm and Copenhagen, we’re heading back to Scandinavia to visit a city that’s not quite as well known as those capital cities: Bergen. Located on the west coast of Norway, the ‘capital of the fjords’ is guaranteed to please outdoorsy types. After our brief stops in Yerevan, Nantes and Swedish Lapland, let’s take a trip to northern Europe again. A small spoiler: King Harald V and Crown Prince Haakon won’t be coming along for the ride.

To start, we’ll be visiting the most obvious sight of all: Bryggen Harbour. Listed by Unesco as a heritage site, this neighbourhood is made up of rows of magnificent small wooden houses. Although the buildings have burned down over the centuries, they’ve been rebuilt brick for brick, following original construction methods. What was once a key port for the Hanseatic League is now an excellent place for a stroll and a spot of shopping. A charming start to your first day in the city.

Now head a little further out to check out a rather unusual sight. Around 45 minutes by road by central Bergen, on one of the many islands in the area, you’ll find a wave farm, built in 1985. It was placed here to make the most of the power of the waves that roar against the coast in this part of the country. But just three years after it was built, a storm destroyed the farm. Today it remains a fascinating (and eerie) place for a wander – and a reminder that humans are far from mastering the elements around us.

When lunchtime comes, we’d recommend Pingvinen, back in Bergen. Near Lille Lungegaardsvannet, the small lake in the city centre, this is undoubtedly one of the city’s friendliest and warmest spots for a bite to eat. Its look is half New York restaurant, half seaside café, and on the menu you’ll find traditional Norwegian fishes of all stripes. Expect things like reindeer burger, sheep ragout or fish gratin tart, plus a decent array of vegan and gluten-free options too. It’s succulent, satisfying food, which will certainly warm you up after a bracing winter walk.

In the afternoon, you should go and check out the Fantoft Stave Church. Built in 1150 in a village and incredibly well preserved, it was moved to Bergen in 1883. It was once an exceptional example of Scandinavia’s wooden stave church style, but was burnt down by a a member of the ‘black metal’ community in 1992, in the midst of a wave of anti-Christian attacks. The building was reconstructed a few years later, and inside you’ll find the original crucifix which miraculously survived the fire. If you love a bit of mysticism and magic, it’s an absolute must-visit.

Your final stop before dinner should be the Lepramuseet, the Leprosy Museum. Housed within an eighteenth-century building belonging to St George’s Hospital, it tells of the important role Bergen has played in the struggle against this illness. It’s also where the bacteria responsible for leprosy was discovered by Gerhard Armauer Hansen in 1873. More interestingly (and troublingly), a trip through these buildings allows visitors to understand the isolated lifestyle of those who suffer from the illness. It’s a place that’s a lot more exciting (and less gloomy) than it first appears.

Case of the hunger pangs? For dinner, you should drop by Lysverket. This Michelin-star restaurant is housed within the KODE art museum, and run by chef Christopher Haatuft, who’s honed his craft at several major kitchens across the world. Haatuft’s speciality is transforming simple dishes into extraordinary culinary experiences, often based on bizarre flavour juxtapositions. If you do make it to the restaurant, you’ve got to be ready to be surprised. Even if Haatuft tells you he’s ‘shaken up’ his grilled langoustine by adding some coffee to the seafood sauce.

Welcome to the Lofoten

Sweden’s third city (by population), this city in the south of the country is among the continent’s most diverse places, with 30 percent of its inhabitants born abroad.