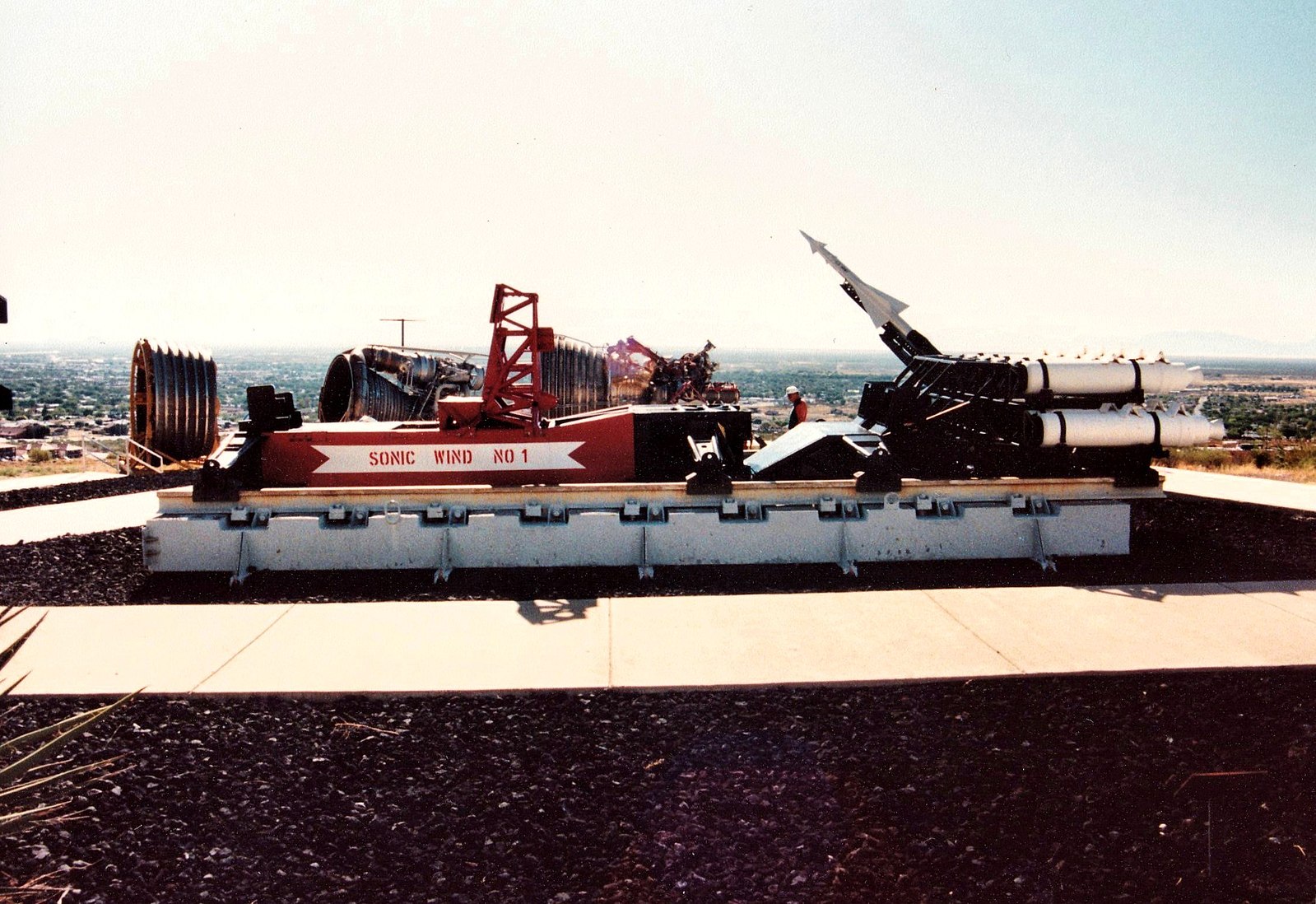 Trains that test the limits of the human body

On board the Gee Whiz and Sonic Wind with John Stapp

Freight, passenger transport, the exploration of little-known regions, political tourist ventures or simple journeys for the sake of it: the functions of the train are broader and subtler than you might think. But there’s one we’ve yet to touch upon in these newsletters: using a rail-based vehicle for scientific research. So today we’ll be telling you about how US Air Force doctor John Stapp tested the limits of the human body thanks to the Gee Whiz and Sonic Wind n°1.

Born in 1910 in Bahia, Brazil, to two baptist missionaries, John was the oldest of four brothers and quickly found his path in life. After the premature death of one of his cousins in 1928, the young boy decided he wanted to be a doctor. But once he’d obtained his degree, John Stapp became a military doctor and joined the US army in 1944.

He quickly became known for his bravery and thirst for discovery, and got a peculiar thrill out of putting himself in dangerous circumstances. So he embarked on a series of flights in unpressurised planes to carry out research into accidents that take place at high altitude. He worked out that if he breathed in pure oxygen for 30 minutes before lift-off, then he could spend a total of 65 hours at an altitude of 40,000 feet, or 12,000 metres, without harming himself. This method, he concluded, could help teams who had to fly at such high altitudes.

Having been spotted by his higher-ups, John Stapp was transferred to Muroc air base in California, where he headed up the MX981 project. This aimed to determine what the body could withstand in cases of extreme deceleration, for example in plane crashes. It was believed at the time that the amount of force our body could take was around 18g, meaning it would resist around 18 times the equivalent of the force of gravity. So planes were kitted out with material aiming to resist this force. But the US army needed to know whether this limit could be surpassed. That would allow them to find out whether it was possible to be ejected from a supersonic plane and survive.

But since they wouldn’t have been able to destroy a plane as part of each experiment, John Stapp and his colleague David Hill built a rail-based vehicle that would allow them to carry out their tests: the Gee Whiz. This vehicle was propelled by four rockets with a thrust of 5,000 pounds, or 2,268kg, each. They also allowed it to reach different speeds that would change the amount of force it exerted (and thus the amount of g). After eight months and 35 experiments with a mannequin named Oscar in the seat, John Stapp decided to step in himself in December 1947. He started with a single rocket that allowed him to withstand a force of 10g, then got back in the next day with two additional rockets And so on. In August 1948, he managed to resist 35g, making the supposed limit of 18g completely obsolete.

His experiments didn’t take place completely smoothly, however. Cracked ribs, a broken wrist and various cerebral problems were all pretty major and notable side-effects. But the military doctor didn‘t climb into his vehicle out of pure love of risk. He did it because he didn’t want to expose other human beings to a similar level of danger – with potentially irreversible consequences. Several volunteers, as well as chimpanzees, would also take part in the experiments, under Stapp’s watchful eye.

After 74 tests with human beings and 80 others with monkeys, a new vehicle was built to replace the Gee Whiz: the Sonic Wind n°1. While John Stapp and his team’s research had already allowed the army to kit out planes with material that would allow them to resist 32g (and with seats turned backwards), the doctor then had to study the effects of wind and deceleration at supersonic speeds. Longer and wider than its predecessor, the Sonic Wind had 12 rockets, allowing it to exert a thrust of 50,000 pounds, or nearly 22,679kg.

The experiments resumed with a new mannequin, then a chimpanzee before John Stapp climbed aboard once more in March 1954. It was that year, too, that he made his last trip in one of these very unusual vehicles. On this trip, the Sonic Wind was launched at a ridiculous speed, producing a force of 46.2g when it was stopped by the hydraulic brakes – comparable to an ejection at Mach 1.6 at an altitude of 12,000 metres. It was a record at the time, and remarkably, Stapp made it out alive, though all the capillaries in his eyes had burst. That was the price he paid for all the scientific advances he had offered humankind, and which he kept on offering up until his death in 1999.