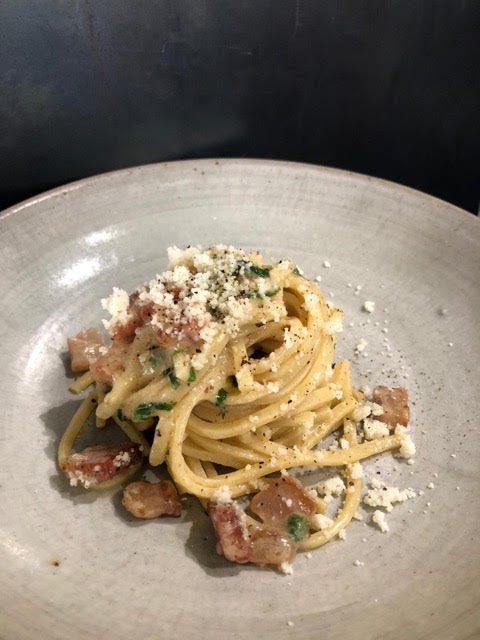 Let’s just say it straight up: he’s undoubtedly the most acclaimed Roman chef in the world. Giovanni Passerini has done us the honour of sharing one of his favourite recipes. On the menu? Gricia, a true classic of Roman cooking. Buon appetito!

To really smash this simple recipe, you’ll want to cook the tonnarelli in a frying pan with a diameter of at least 36cm. If you don’t have one, opt instead for a different kind of pasta – preferably something shorter, like mezze maniche or rigatoni.

Pour five litres of water into a pan, add 25g of sea salt (a little less than usual, because both pecorino and guanciale are pretty salty already) and bring to the boil.

Chop the guanciale into cubes of around 1.5cm. Fry them in a large pan on a medium heat, without adding any other fat, until they are lightly browned. Add a good splash of the pasta water and put aside.

Tear up the mint.

Plunge the tonnarelli in the boiling water for three minutes.

After three minutes’ cooking, pour the tonnarelli into the saucepan with the guanciale, put it on a high heat and start to mix the tonnarelli, as you might a risotto, for one or two minutes.

Take off the heat, add a few more drops of the pasta water, allow to cool for a minute and add the pecorino, mint and pepper.

Mix well with tongs, while taking care to not break the tonnarelli.

If the results are a little dry, don’t hesitate to add a few more extra drops of the cooking water. Then serve straight away.

To go alongside this dish, Giovanni Passerini suggests a topped-up Côte du Jura savagnin from Didier Grappe. And as die-hard fans of this legend of Roman cooking, all the Midnight Trains team recommend you book a table at Passerini’s fab Paris restaurant. You won’t regret it.