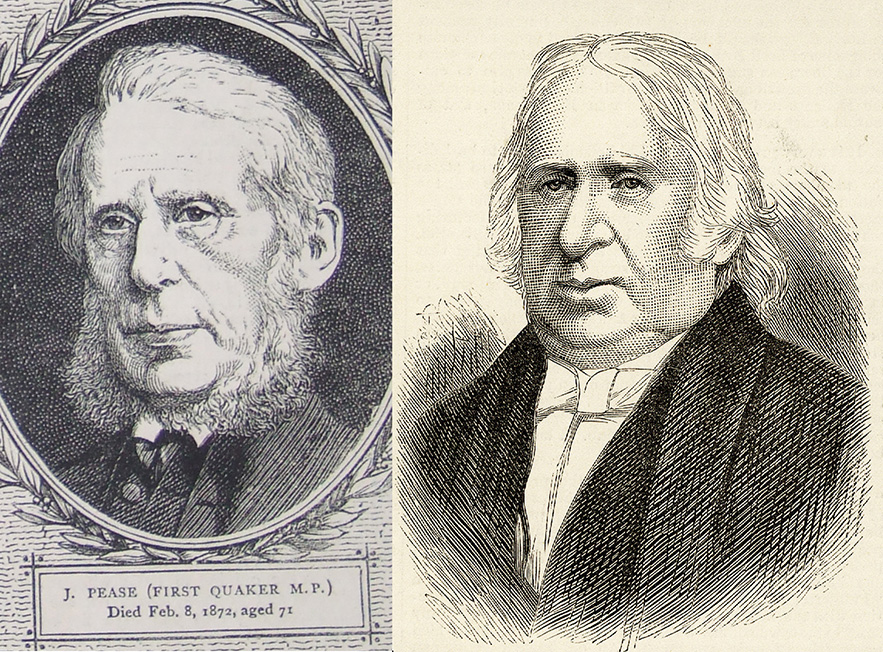 Our series on the great families of the railways is going to the UK. Having told you the story of the Pereire brothers and the Rothschild family, this time we’ll be focusing on two generations of the Pease family. They may not be as well known as the other two, but this clan produced two real pioneers of the railways: Edward and his son Joseph.

Let’s start with Edward. Born in 1767 in Darlington, England, this son of a wool seller joined the family business at 14 just after leaving school. He hadn’t much enjoyed studying but really got into work, and all those who knew them described him as having incredible amounts of energy. Edward travelled up and down the country buying sheep fleeces from farmers, before selling them onto sellers in cities including London. On each trip, his understanding of the transport of goods got sharper and more refined. His job introduced him to small producers and industrialists alike, and in doing so he realised one thing: there was a gap in the market for a transport system linking the coal pits of the county of Durham with the port of Stockton, helping to deliver coal to London more efficiently.

Edward’s first idea was to make the River Tees more navigable. But when getting stuck studying the feasibility of such a project, he realised that building a railway would be much better. This would be much less expensive and much more efficient than digging a canal or manipulating a river. From 1817, he was sold on the idea, and went around telling everyone he could about it. He would attend salons to sing its praise in front of the great and good, and thanks to this, an Act of Parliament was passed on April 19 1821 giving the go-ahead to a horse-pulled railway on the route he had requested. But soon he himself was to be persuaded by George Stephenson that the locomotive he had built was as powerful as ten horses and that he should use this technology instead. And that’s exactly what Edward did, once the above law was amended to allow the use of steam power on this line.

On September 27 1825, the Stockton & Darlington Railway Company was launched. But Edward wasn’t there to mark the occasion. One of his sons had died the night before and he couldn’t be there to witness the birth of this other kind of child. But that didn’t affect the product, with George Stephenson driving his locomotive in front of a large crowd. After the passage of a horseman carrying a flag on which the phrase Periculum privatum utilitas publica (‘The private danger is the public good’) was written, they witnessed several carriages filled with sacks of coal and flour go by at around 24 kilometres per hour. But most intriguingly, there was a carriage called ‘The Experiment’ carrying around 450 people. According to Britannica encyclopedia, that made it the first railway line in the world to mix freight and passenger transport thanks to a steam engine.

Four years later, in 1829, Edward left the business in charge of his son Joseph, who already worked alongside him at the Stockton & Darlington Railway Company. Just as ambitious as his father, he continued to build the family businesses, notably coal mines. By 1830, in fact, he owned more than anyone else in the county. But above all, with a group of quaker investors (a protestant movement extolling pacifisme, mutual aid and an ascetic lifestyle). He built a huge plot of land to build a port for exporting coal (and later iron and steel). What had been an agricultural area that was hardly exploited at all started to grow. Eventually it became the city of Middlesbrough, which today has 140,000 inhabitants. A second train line opened in 1830 linking this city with the transport system put in place by the Peases.

Joseph was not only a great industrialist but also a member of Parliament from 1832. The only problem is that he was the first quaker to hold such a position, which created a few complications. Notably he refused to take an oath and a special commission ended up having to authorise him to get around this obligation by ‘affirming’ rather than ‘vowing’. More anecdotal but just as surprising for the members of the Parliament at the time was that he refused to take off his hat when he sat down. Like several quakers belonging to the Underground RailRoad, Joseph Pease was militant in the fight against slavery, the defence of peace and cruelty against animals. He retired from politics in 1841 without giving him his ideological battles. And he died in 1872 having, like his father, played a vital role in creating what is still today considered the first public steam railway.

The great families of the railways - Episode 1

Emile and Isaac were both born in Bordeaux, on December 3 1800 and 25 November 1806. They were brought up in a Jewish family who had to flee first Spain and then Portugal, and were grandsons of Jacob Rodrigue Pereire, a pioneer of education for deaf and mute children.

The great families of the railways - Episode 2

James in the second instalment of our series on the great families of the European and US rail industry.