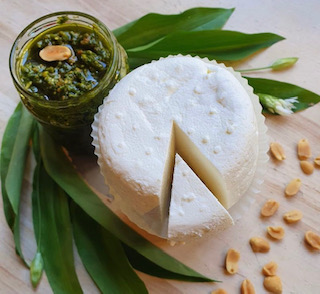 Whether you’re Parisian or simply love good food, this week we’re whisking you off to a shop in the French capital that is guaranteed to please. La Laiterie de Paris isn’t any old fromagerie: when its first outlet opened in Marcadet-Poissonniers, it was in fact the first time anyone had started making cheese in the heart of a major French city. The concept of the urban dairy was born, and it was largely thanks to the determination and vision of founder Pierre Coulon.

Coulon had kicked off his career by studying criminology, but later changed paths and launched himself into food production instead. He spent some time in Quebec before returning to France to run his own farm. Due to financial difficulties, he had to call that venture to an end. But that was by no means the end of his food business. He then decided to set up Paris’s first dairy, producing his own cheese with milk from across the Île-de-France and Normandy regions, and offering a selection of exceptional, sustainable cheese. Following a crowdfunding campaign, the venture became a huge success.

La Laiterie de Paris has just opened its second boutique. Pierre Coulon was keen to ensure the shop was in a diverse area filled with normal people, so set up shop at 125 Rue de Crimée in the 19th arrondissement. Here you’ll find all the excellent products that have helped make La Laiterie de Paris’s name, with cheeses made in the city and others sourced from across France and Europe. Here’s a recipe for chèvre (goat’s cheese), loads of which you’ll find in the shop, which Coulon shared with us for this week’s newsletter.

Crush the wild garlic leaves and peanuts until you obtain a smooth paste.

Add the oil and stir vigorously to create a pesto-like mixture.

Cover the goat’s cheese with pesto and serve straightaway, accompanied with toast and a glass of wine.

Cheese making has become so industrialised that in many cases you can hardly taste authentic stuff these days. To remedy that, we asked the visionary team from Terroirs d’Avenir to help you curate the ultimate cheese platter (and one that isn’t too bad for the environment, either).

Mathilde and Audrey have now shared the recipe for their grapefruit-pistachio tart, given this is prime citrus season. Bon appétit!