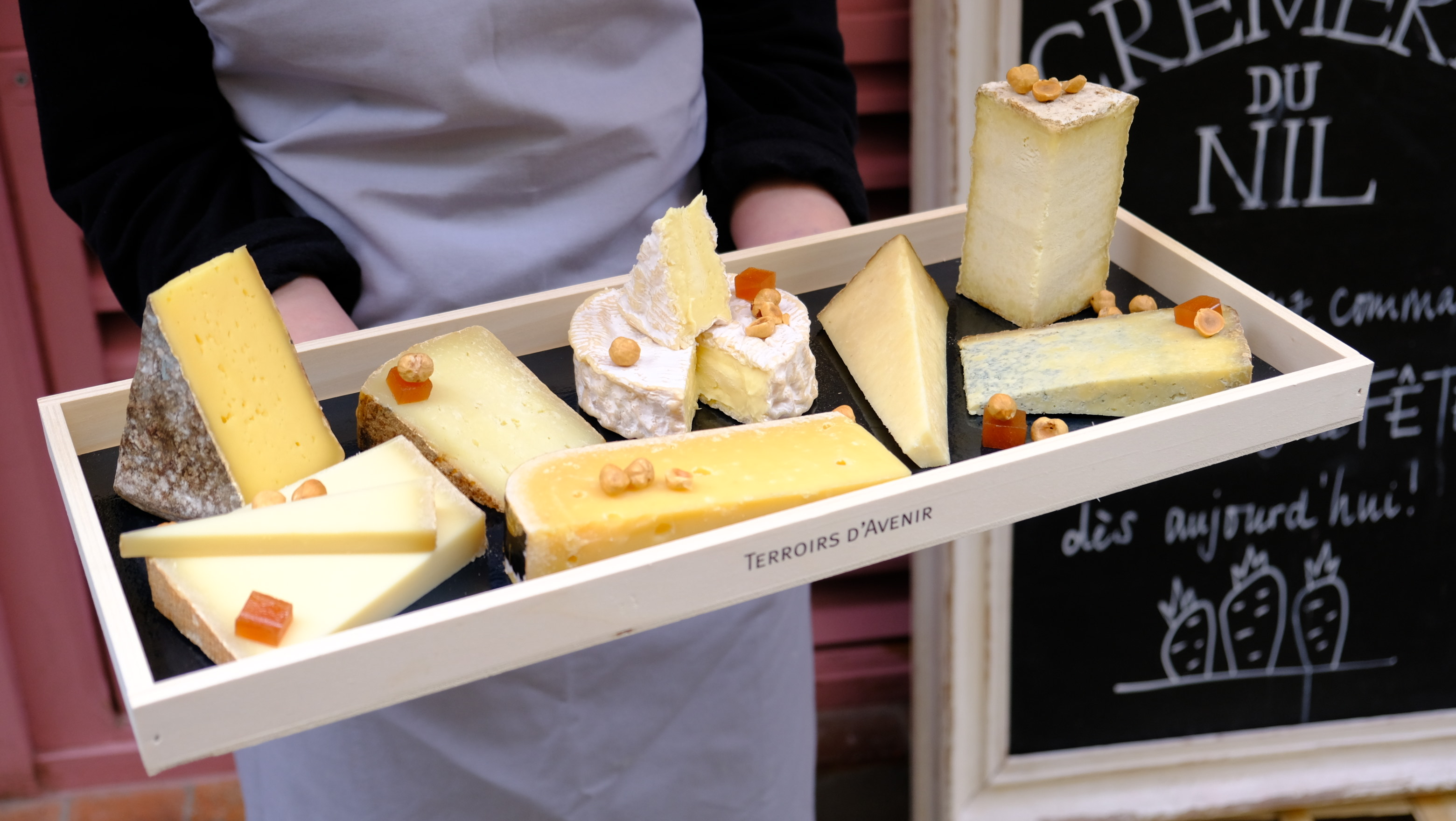 The end-of-year festivities are approaching, and because they’ll hopefully include a generous helping of meals with family and friends, Midnight Weekly will be sharing a number of recipes, from entrée to dessert, that should hopefully impress your loved ones over the coming weeks.

To follow up the starter and main we shared in recent editions, we’re now moving on to the traditional cheese platter. But just any old platter. Cheese making has become so industrialised that in many cases you can hardly taste authentic stuff these days. To remedy that, we asked the visionary team from Terroirs d’Avenir to help you curate the ultimate cheese platter (and one that isn’t too bad for the environment, either).

Terroirs d’Avoir is the brainchild of Samuel Nahon and Alexandre Drouard: two entrepreneurs as attracted to good produce as they are repulsed by the industrialisation of agriculture. Since 2008, their company has become best distributor of high-quality farm produce (as well as sustainably sourced fish), in Paris and the wider region. Their shops sell veg, fish, seafood, kindly-raised meat and some of the very best cheese you’ll find in France. Here are eight they’d recommend for your platter.

The cheeses to track down

1. The Camembert de Normandie from the Ferme du Champ Secret: An iconic cheese that’s all too often turned bland through mass production. This is one of only two organic raw-milk camemberts. The farm raises 105 cows on a diet of herb and grass, and that filters down into a deeply flavourful cheese. The raw milk also gives the cheese a distinctive taste (especially compared with standard pasteurised milk).

2. Le Bleu de Termignon: This savoyard cheese is the work of Joseph Paccard, and is made between June and September at 2,000 metres high, thanks to a troop of 30 cows, raised on the grasses and flowers of the Parc National de la Vanoise. These crops contain yeasts that pass into their milk, then the cheese, and give it a very subtle smell. This cheese ‘blues’ in a cellar thanks to natural, spontaneous moulds.

3. The 24-month Gouda from Boeren-Goudse Oplegkaas: This Dutch gem comes with the Sentinelle Slow Food label, which honours cheeses that are rarely produced these days. Far removed from the industrial products and pale imitations that are created with pasteurised milk, this gouda is truly delicious, and has been delighting the Dutch since the seventeenth century.

4. The 18-month Laguiole: The livestock behind this sure-fire highlight of your platter? Thirty-four cows go out to pasture from May to November on the natural prairies of the Aubrac plateau, 1,000 metres up. Lionel Sabrié is the wizard who then turns the milk into cheese: he is the only small organic producer of this cheese.

5. The Basque sheep-milk Tommes: These traditional numbers are the result of six producers determined to hold onto another way of going about making cheese. Some make theirs completely by hand, others are shepherds who don’t even have any land, and their sheep are all native to the Pyrénées-Atlantiques region. The rich flora and the diversity of the prairies in this region have a big impact on the flavours and aromas of the tommes.

6. The Persillé de Tignes: Did you know cheeses are seasonal? Goats, for example, don’t naturally produce milk from November through to February. With the festive season approaching, go for Tommes and aged crottins. This one is made with a mix of raw milk from cows and goats, which graze in mountain pastures from June to October.

7. The creamy Tomme from the Ferme du Bois Joubert: Yet another cheese supported by Slow Food, with its 25 Bretonne Pie Noir cows, which graze over 80 hectares of marshy prairies in Brière, near the mouth of the Loire. This species was among the most popular French cows at the start of the twentieth century, but declined slowly during the 1960s (largely because it produces half as much milk as many other breeds). But its milk remains one of the creamiest there is, so just imagine how good the taste is.

8. The Gruyère d’Alpage (12 to 16 months): We’re winding up in Switzerland, in the canton of Fribourg. This is where Patrick Mauron makes gruyères that have very little to do with the bland industrial versions you’ll find everywhere nowadays. His 50 cows gambol around in the mountains, 1,245 metres up. The result? One of the best gruyères you’ll ever taste.

Where to go elsewhere in France and Europe

If you’re not in Paris want to get hold of some high-quality cheese like those from Terroirs d’Avenir, here are a few unmissable addresses: La Laiterie Marseillaise, La Laiterie de Lyon, La Laiterie Toulousaine, La Fromagerie Métin (Nice), Neal’s Yard Dairy (London), Beppe e i suoi formaggi (Rome) and Brie Alto (Madrid). And for even more cheese-choosing knowhow, here ten criteria to bear in mind according to Pierre Le Fromager.

We’ve asked Bertrand Grébaut, sustainable cookery pioneer and owner of Michelin-star restaurant Septime, to give us the lowdown on a timeless Parisian classic. À table!