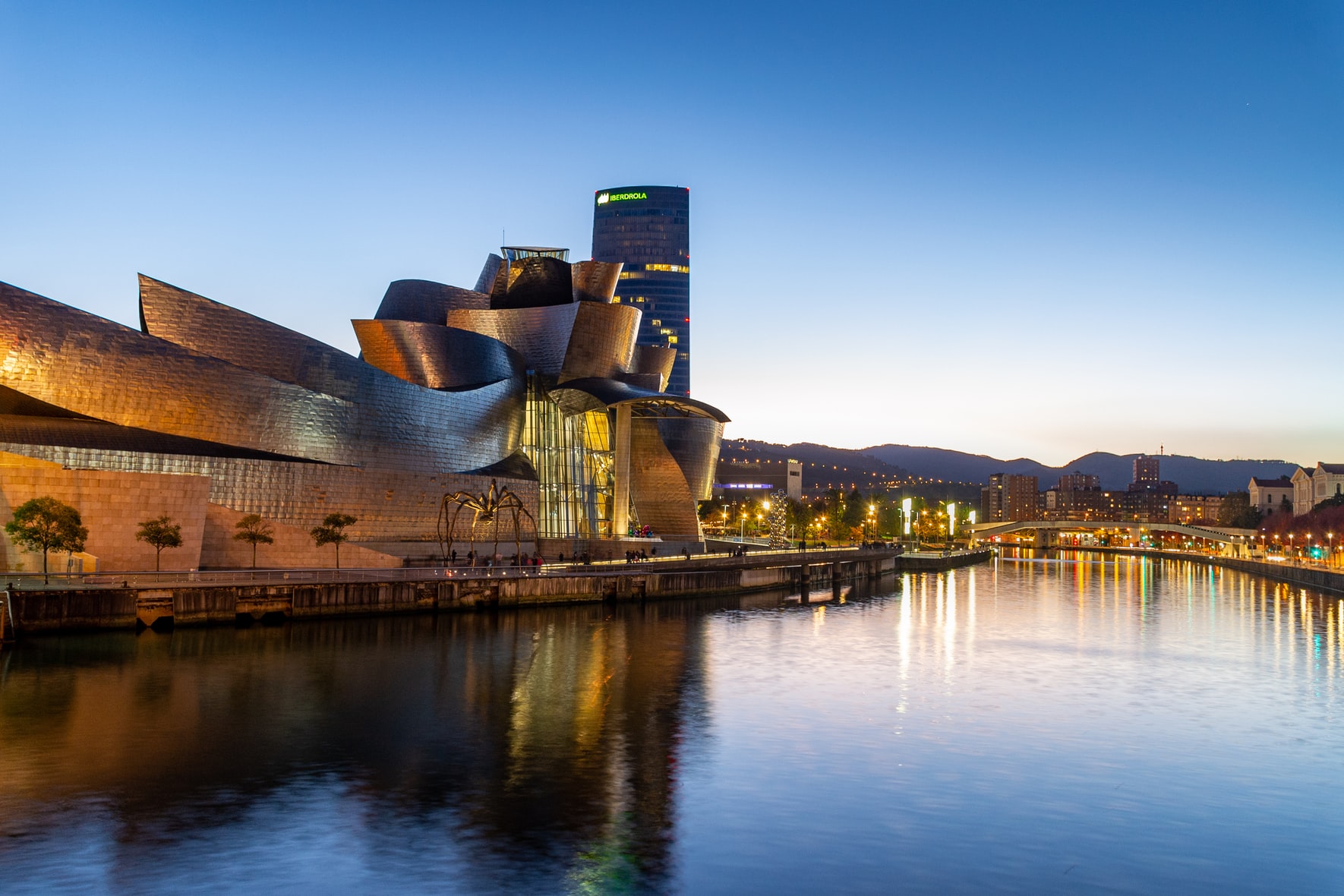 That means welcome to Bilbao, in one of the four official languages of Spain. Yes, this week, we’ll be heading off to the Basque capital. Bilbao has had something of a new lease of life in recent decades, without ever losing its authenticity. And you’ll also find that subtle balance between past and modernity on your plate: the city must be one of the city’s best gastronomic destinations. So, a little further down, you’ll find a good handful of our favourite restaurants in the city. ¡Adelante!

Bilbao may be one of Europe’s biggest ports, but clearly we’d recommend you travel there by train. Quite simply because the design of train stations there is pretty original. Two of them are really worth a detour. The first is also the oldest: in operation since 1863, the Abando station houses a majestic stained-glass window (which you pass before you get to the platforms). Fifteen metres long and ten metres high, it represents several Basque scenes and landscapes. The architecture of the second, Concordia station, makes it feel like a place of worship. Truly unmissable.

Once you feel somewhat settled, head to the Casco viejo (old town) to soak up the atmosphere in the most historic part of town. This area is known for its seven iconic parallel streets, historic alleyways and panoply of independent shops: it’s a great place to get to know the city. Here you’ll also be able to get a feel for the basque terroir by roaming the stalls of the Ribera Market, with all its amazing cheese, seafood, fish and charcuterie.

Keep exploring the city – chronologically. When the Casco Viejo no longer sufficed to house the population of Bilbao, another neighbourhood was built in the sixteenth century (and it’s never stopped growing): Ensanche. The architecture reflects the successive influences which have moulded the city: neo-Renaissance, neo-gothic, art nouveau, art deco and so on. This area is also home to Casilda Iturrizar park, Bilbao’s true green lung, whether for a good old-fashioned Basque paseo (walk) or to check out a show at the Museo Bellas Artes, which is located there.

There’s all sorts of amazing architecture in this city. Another great example is the Alhóndiga, which was once a vast wine storehouse. The huge, historic brick building has had a new lease of life thanks to the architect Philippe Starck. Inside, you’ll find lushly designed colonnades, chess tables, a cinema, design stores, performance spaces and a swimming pool.

Next up, you’ve got to head to the Guggenheim Museum. Open since 1997, the building is architect Frank Gehry’s masterwork. The scale of the place will blow you away, and so too will the permanent collection (featuring works by the likes of Louise Bourgeois, Anish Kapoor and Jeff Koons). Right now, the exhibition Elles font l’abstraction, which spotlights the women who shaped the modernist movement, is well worth a look.

No doubt that after all that traipsing around, you’ll have worked up quite an appetite. Happily, there’s all manner of brilliant places to eat and drink both in the Casco Viejo and the San Francisco neighbourhood. Before sitting down for a meal, we’d recommend the tasting experience offered by Crusoe Treasure, an underwater bodega around 30km from Bilbao which lets its wines age in a storeroom under the sea. Don’t have time to leave Bilbao? Try Cork, a natural wine bar that has a decent range of local bottles and others from across Spain, plus some decent dishes like calamari in their ink, peppers stuffed with cod, tuna empanadas, tortillas or callos a la vizcaína, a local speciality.

One thing you can’t miss in Bilbao is pintxos: slices of bread which can be topped with all manner of Basque delicacies. The best way to discover this key component of the Basque way of life is to hop from bar to bar and sample as many as you can. Some places we’d thoroughly recommend: Gure Toki, El Globo, El Huevo Frito and Xukela.

As for sit-down restaurants, head to Peso Neto for its delicious (and affordable) menu of the day. If you fancy indulging in some sobremesa – an untranslatable Spanish word that refers to over-the-table discussion – you could do much worse than Michelin-starred Azurmendi Atxa, headed up by legendary chef Eneko Atxa; the dinky Mina, with its focus on local produce; or Dando la Brasa, whose Japanese-Latin American fusion dishes are always a delight.

While both of the major Portuguese cities have attracted huge numbers of visitors in recent years, many still like to draw contrasts between them. As one common saying has it: ‘Lisboa diverte-se e o Porto trabalha’ (‘Lisbon has fun and Porto works’).