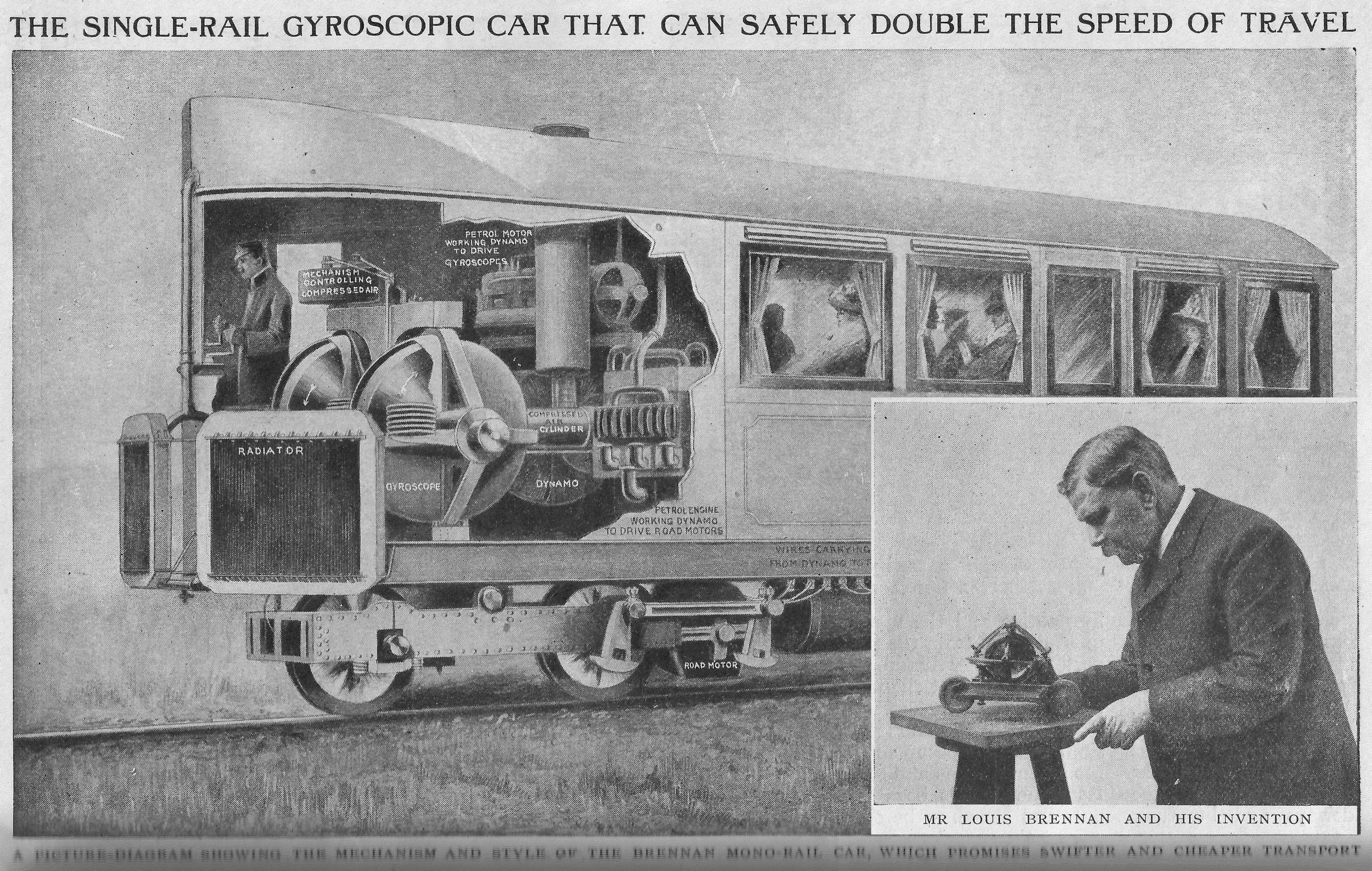 On board Louis Brennan’s gyroscopic monorail

In 1910, the City of London hosted The Japan-British Exhibition. Aiming to celebrate the renewal of the Anglo-Japanese relationship, this enormous international expo went all out to promote the Land of the Rising Sun among the British public. Across a vast space, famous landmarks and scenes from the city were reconstructed, with buildings, statues, trees, bushes imported from the other side of the world. More than 2 200 exhibitors were involved, each doing their bit to convince Brits that Japan is a modern country and an ally worthy of their confidence (and trade partnerships). But right in the middle of the tea houses, the traditional gardens and the recreated rural village was the star exhibit: a train that didn’t have much to do with Japan at all.

This was the gyroscopic monorail invented by Irish-Australian engineer Louis Brennan. That day, the moustachioed and well-dressed inventor had set his vehicle running at 20 miles (or 32 kilometres) per hour on a circular track. Fifty people, including none other than Winston Churchill, were on board. Aged 36 and already heading up a government department, the famous politician was so impressed that he went out of his way to make sure the British prime minister had a go on the train himself.

But it wasn’t Louis Brennan’s first invention. He had already come up with one of the world’s first guided torpedoes, though the monorail had been his focus for several years now. Why? The engineer had realised that it was incredibly difficult to build traditional railway tracks in landscapes as uneven as certain parts of Australia. He thought that his new system could make things a whole lot easier and even believed that his trains could travel twice as fast as most trains at the time. Clearly, there was a higher risk of Louis Brennan’s single-rail vehicle coming off its axis at each turn in the track, so the engineer fitted the trains out with gyroscopic technology to stabilise the carriages.

For those who don’t know, a gyroscope is a sort of spinning-top, invented by Léon Foucault, which allows you to control the orientation and angular velocity of an object, in this case a train. Haven’t quite understood? Not to worry, our friend Veritasium explains the concept pretty welin the video below.

Louis Brennan’s idea was both incredibly creative and a little disconcerting. And as Winston Churchill’s excitement about the project shows, people were really excited by this novel idea. After several years of research, Louis Brennan applied for a patent in 1903, then demonstrated his technology in 1907 before the Royal Society using a small circular model. Two years later, in 1909, the vehicle was demonstrated in public for the first time in Gillingham, Kent, where it was manufactured.

This version of the vehicle was 12 metres long and three metres wide. It could carry 32 people and travel at a speed of 35 kilometres per hour. The gyroscopes were located in the carriages (although he had initially wanted to put them beneath the floor). The only problem is, as crazy as it seems, another man had been working on gyroscopic monorails at the same time. Worse still, the latter, called August Scherl, had just unveiled his technology. Louis Brennan therefore didn’t have the luxury of being able to wait and demonstrated his vehicle a little earlier than planned.

Despite the interest of Winston Churchill and several other notable people, Louis Brennan’s vehicle would never be developed at an industrial scale by the government. For example, many weren’t convinced by the single-rail technology. In 1910, the powers that be thought the public would never get on board with such a system. For them, only a good old-fashioned two-rail system would appear sufficiently sturdy to win their confidence. In retrospect, this was probably short-sighted, because they may well be less common than double-rail systems, loads of monorails have been successful and are still running all over the globe.

Like Jean Bertin’s Aérotrain, Louis Brennan’s gyroscopic monorail and those of August Scherl and Piotr Shilovsky were inventions that contributed greatly to the evolution of railway technology. They weren’t just kinds of technology that weren’t viable or accepted in their time, there were also examples of limitless creativity, the sort that crops up so often in the history of the railways. Just like the prototypes for SNCF’s light trains, they were essentially tests that aimed to see what was feasible or not at a time of great experimentation. And we’ll doff our caps to all those types who’ve aimed to improve trains over the years; all those tireless inventors dedicating their careers to vehicles that never even saw the light of day.

Is it a bird? Is it a plane? No, it’s an Aérotrain. That’s how the credits for a Netflix series about this far-fetched invention would start.

Climb aboard the high-speed KTX

Named KTX, for Korea Train Express, the trains are a symbol of the country’s cutting-edge technology and a very popular means of transport for locals. Let’s take a short trip.